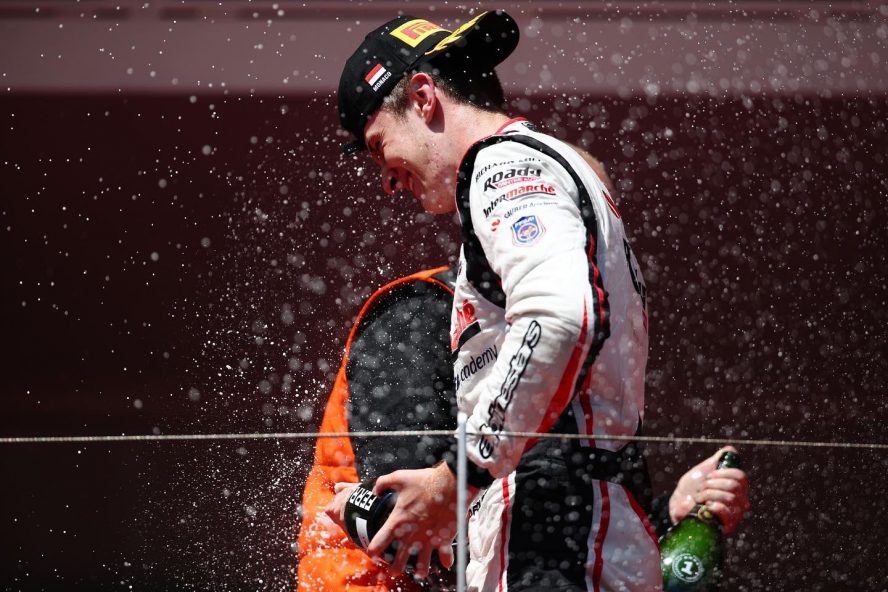 As the half way points of the F2 season approaches, we look at Pourchaire’s season so far, whilst he looks ahead

With the halfway point of the Formula 2 season fastly approaching ART driver Théo Pourchaire has put himself in strong championship contention.

Returning for a second year in Formula 2 Pourchaire chose to stay with ART after an impressive rookie season. He finished 5th in the driver standings taking 140 points and two race wins.

His season so far

Moving into the 2022 season Pourchaire has been on top form taking home points from five of the six rounds.

The opening round in Sakhir proved strong for the French driver taking his first Feature Race win of the season after having to retire from the Sprint Race. This saw Pourchaire take the lead in the Championship.

Round Two in Jeddah proved a struggle as he finished 13th in the Sprint Race, as well as being forced to retire from the Feature Race after what appeared to be electrical issues. A pointless weekend meant that he fell out of the top three in the standings.

Looking to make an impact in Imola, the Sauber Junior did just that. The ART driver took two points from the Sprint Race after finishing 7th. Determined to make more improvements Pourchaire claimed the Feature Race win after a heavily disrupted session. This was exactly the comeback Pourchaire needed as it propelled him back into the Championship lead.

The ART driver had a very consistent round in Barcelona claiming eight points over the weekend. Pourchaire finished 5th in the Sprint Race as well as 8th in the Feature Race. Championship rival Felipe Drugovich, however, had a very dominant weekend and therefore took the lead in the Championship placing a 26 point gap between the pair.

After becoming the youngest race winner in Monaco at only seventeen years old Pourchaire is no stranger to the streets of the Principality. The ART driver claimed P6 from the Sprint Race making up two places after starting P8.  After a very close Feature Race, Pourchaire finished second after being on Drugovich’s tail for most of the race.

Taking the fight for the lead in Monaco to the next level 📈😅#MonacoGP #F2 pic.twitter.com/PuJFejJ8kV

Despite this, however, the gap between the pair increased to 32.

Progressing into Round Six in Baku Pourchaire will be hoping to decrease the gap. Speaking to Formula 2 after the Feature Race Pourchaire expressed that “the Championship is very long. I know I have the pace to win it.”

It’s no secret that the French driver is a favourite to progress into F1. Pourchaire signed with the Sauber Driver Academy in 2019 and has been supported by them ever since. He also made his Formula 1 debut in August 2021, when he completed a private test at the Hungaroring in the Alfa Romeo C38.

It has been suspected that Pourchaire will take part in a Free Practice session during the 2022 season. Speaking to F1 Feeder Series the F2 driver commented:

“We agreed with Fred [Vasseur] that it was better not to drive in F1 on the same weekend as F2 rounds. It is paramount for me to focus on F2. F1 testing is a bonus, it’s for the future if I do become the F2 champion.”

Earlier this year Pourchaire did three days of testing on behalf of Sauber-owned chassis constructor, Spark. The test’s aim was to help the development of Formula E’s Season Nine’s Gen3 Car. The Sauber Junior described his first time in a Formula E car as “quite funny” Moving on to say it was a “Good experience, the car is much faster than the Gen2, which is a good thing.”

It was a good experience 👍🏻🔋 pic.twitter.com/Q1wciHoTyD

It has also emerged that ART will be assisting Nissan with their test and development of the Gen3 car during the summer. This has led to speculation that Pourchaire is in contention for Sebastien Buemi’s seat.

The Formula 2 driver was quick however to shut the rumours down taking to both Twitter and Instagram to express that this was “fake news”.

Formula 2 returns to Baku this weekend (10-12th June) for Round Six.