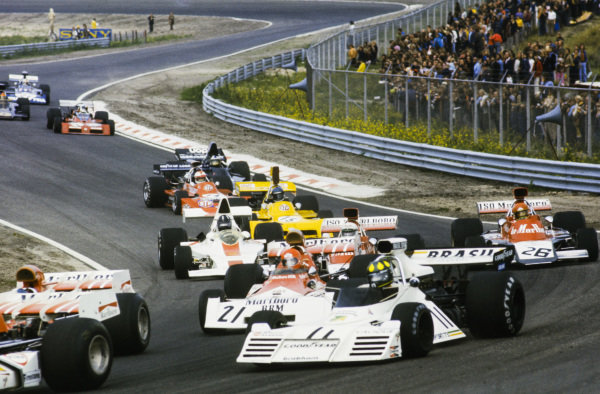 The Tragedy of the 1973 Dutch Grand Prix

Zandvoort is back on the F1 calendar this season, but tragedy has struck there before

Formula 1 returns to Zandvoort for the Dutch Grand Prix, so let’s take a look at one of the most famous races at the Dutch circuit.

It was a dry day in Zandvoort and heading into the round, Jackie Stewart led the championship by one point from Brazilian Emerson Fittipaldi. On pole for the race was Fittipaldi’s teammate Ronnie Peterson, nicknamed “SuperSwede.”

The previous race at Silverstone was won by Peter Revson’s McLaren, but the most well-known event of that race was the opening lap crash which was caused by reckless rookie Jody Scheckter.

The race began with Rikky von Opel failing to start. On the opening lap, Jackie Oliver crashed out in his Shadow and by lap three, Fittipaldi retired due to pains that he was suffering from. Mike Beuttler, one of three LGBTQ+ drivers to have competed in F1, also retired because of electrical problems.

On lap seven, whilst running in the midfield, rookie Roger Williamson suffered a tyre failure on his March 731. Consequently, he flipped the car, which then caught fire. In an incredible piece of bravery, David Purley, who was driving a 431, undid his seatbelts and abandoned his car, effectively retiring from the race to try and help his fellow driver. Purley then grabbed a fire extinguisher from a marshal and tried to turn the engulfed March right side up. One fire extinguisher wasn’t enough to put the flames out, and sadly it was all in vain.

Williamson passed away due to asphyxiation at the age of just 25. He won the British F3 Championship in both 1971 and 1972 and thoroughly deserved the F1 drive that he had earned, all for it to end after just his second race. He could have been a consistent driver in the top 10 if he was given better machinery and wasn’t a driver lost far too soon.

Purley later won the George Medal, the highest honour in the Commonwealth and entered 5 more F1 races. He retired in 1977 to compete in aerobatics and died in 1985 whilst flying an aerobatics biplane at the age of 40.

At the end of the race, Jackie Stewart took his 26th race victory, surpassing his best friend Jim Clark to take the record for most grand prix wins. Francois Cevert completed a Tyrrell 1-2 and rookie James Hunt took his maiden podium in third. He would later win the 1975 race around the Dutch circuit. Revson finished fourth with Frenchman Jean-Pierre Beltoise in fifth. Home hero and 1971 Le Mans winner Gijs van Lennep took the final points-paying position. Now in the world championship, Stewart had a 10-point lead, the equivalent of a 28-point lead in modern F1. Tyrrell took the constructor’s lead by four points.

However, none of these stats or standings were in the minds of the paddock, whether that was drivers, team principals or the fans that stood in the fields at Zandvoort and saw the crash first-hand. What was in their minds was that one of their comrades, one of their rival drivers and one of the men risking their lives to win was gone, like many before him.

Since then, 11 drivers have died in F1 cars on a grand prix weekend. These drivers were Cevert, Revson, Peterson, Helmuth Koinigg, Mark Donohue, Tom Pryce, Ricciardo Palletti, Roland Ratzenberger, Ayrton Senna and Jules Bianchi. Other drivers that passed away in F1 cars since 1973 includes Patrick Depailler and Elio de Angelis.

We must be very appreciative of the safety brought into the sport by Professor Sid Watkins and FIA Race Director Charlie Whiting, who passed away in 2012 and 2019 respectively. Their legacy lives on in how F1 runs their safety programmes and the halo, which has saved countless lives since its introduction in 2018. Since the death of Peterson in 1978 at Monza, the consistency of safety has been incredible. Credit also needs to go to Bernie Ecclestone for supporting the changes proposed by Watkins after the tragic race in ’78.

Formula 1 returned to Zandvoort for the Dutch Grand Prix this weekend. Max Verstappen returns to the circuit, his home race, as defending World Champion. Will he win the race? Or will Ferrari be victorious?