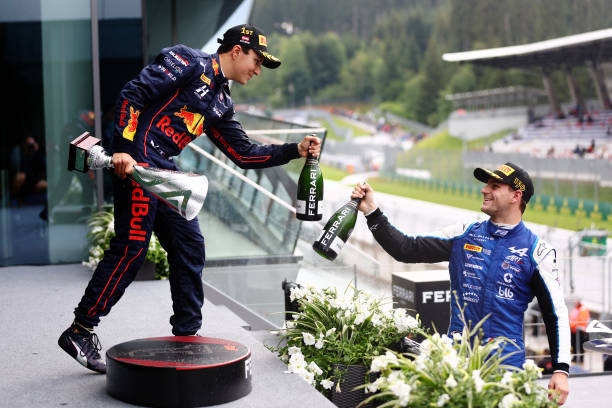 The battle for the title is getting tense

With four rounds to go, the top five drivers are all in with a chance of grabbing the title of Formula 3 champion.

Those frontrunners – Victor Martins, Isack Hadjar, Arthur Leclerc, Jak Crawford, and Roman Stanek – are covered by only 31 points. How have each of their performances been so far this season?

This is Martins’ second season in Formula 3, and he no doubt wants to improve on his 2021 finish of fifth place.

Looking at his results so far, he is certainly stronger in the longer feature races. In these, he has more of a chance to combine strategy and focus on race craft. This is not to say that he is awful in sprint races – Martins has two second-place finishes to his name.

However, you could argue that consistency is something that he needs to work on. The other three sprint races have seen him take just three points. On two of these occasions, he finished outside of the points entirely.

Despite this, Martins’ two race wins have kept him at the top of the standings for the entirety of the season. He does not tend to dominate races – the largest margin he had to an opponent over the finish line was 2.368 seconds in Barcelona.

If Martins can bag another few victories and work on achieving consistent points finishes, he may well claim the title.

“Martins has been in the lead since Bahrain, but he is yet to achieve a clean and dominating weekend. At Spielberg, he was frustrated that a red flag cut the qualifying session short. He felt he had the car to challenge Hadjar at the top of the standings.”

Hadjar has undoubtedly been the most impressive rookie of the 2022 season. At just 17 years old, he finds himself second in the standings, a single point adrift of the lead.

It is likely that his links to Red Bull earn him the best training and support, but his talent would definitely shine through even if this were not the case.

Hadjar has an impressive three victories to his name – two sprint race wins and one feature race.

His performance in the most recent Austrian Grand Prix was a wonder to watch. Going into the weekend, it was Arthur Leclerc who was one point off of Martins’ lead, but Hadjar’s win propelled him up the standings. It was the first time this year that a driver achieved the perfect Sunday score, adding 28 points to his total.

Despite his rookie status, one of the French racer’s greatest strengths has got to be his consistency. He missed out on points just once this season, in the Bahrain feature race following a race-ruining puncture.

With five podium finishes on his record, this young driver is undeniably one to watch.

It is safe to say that Leclerc has had a rollercoaster of a season. Many had high expectations for the younger brother of Ferrari’s Charles Leclerc, but some weekends have simply not produced the results he hoped for.

Looking at the positives, the Monegasque driver has achieved two podiums this year, including a race win at Silverstone. With Prema’s track record of dominance in previous seasons, it was somewhat surprising that it took that long for Leclerc to claim a victory.

His turbulent season can be put down to a combination of costly errors, bad luck and inconsistency. Above all, Leclerc’s biggest weakness is qualifying – his one-lap pace has seen him start races from as far down the grid as 21st.

“I feel quite confident, we did a really good job so far in the beginning of the year,” Leclerc said. “Of course, it wasn’t perfect because of some tricky qualifying sessions. Sometimes the luck has not been on our side but, in the end, we are making the best out of it.

“We keep working but there are a lot of challenges in this championship. There are many drivers that can aim for pole, so it’s constant work and a constant stress about performing.

“Looking at the big picture, in terms of pace, we have been consistently in the front, so I’m very happy. It’s early to focus on the championship – I don’t really look at the points now. I just keep my head down, working every time and taking the opportunities when they come.”

Now in his second year in F3, Crawford has secured four podiums in 2022, including one victory. The F1 hopeful finds himself just 21 points behind Leclerc. A bad weekend for the Monegasque driver and a dominant session for the American could easily see Crawford leap up the standings.

By James Mackenzie3 days ago

His maiden victory came in Spielberg, where he gained three positions to take the win on Saturday. Things went rapidly downhill, however, in the feature race after a collision ruined his race with just three laps remaining.

Nevertheless, Crawford’s season has certainly been promising. He became the first driver of the year to secure two podiums in one round and has had flashes of brilliance.

Red Bull evidently sees a superstar quality in him – could he become another one of their success stories?

F1 affiliations – no current links, but he was a member of the Sauber Academy in 2019

Rounding out the main title contenders, the Czech driver is fifth in the standings. Like Crawford and Leclerc, he has one race win to his name after he charged to victory in the Imola Feature Race.

What separates Stanek from his rivals is his unusual points-scoring pattern. There have been four races where he failed to score anything. However, when he does manage to claim points, he adds a lot of them to his tally.

Despite his wildly inconsistent performances, he is only three points behind Crawford in the title battle. A couple of good weekends could massively increase Stanek’s points total, demonstrating just how close this year’s standings are.

Could anyone else claim the title?

Whilst the top five drivers are clearly in with the best shot, most of the top ten could theoretically take the title.

Prema Racing will be pleased to have all three of their drivers near the top of the standings. Ollie Bearman finds himself in sixth place, just eight points behind Stanek.

The rest of the top ten looks like this:

With Michel acknowledging that this is the closest title fight for years, anything could happen.