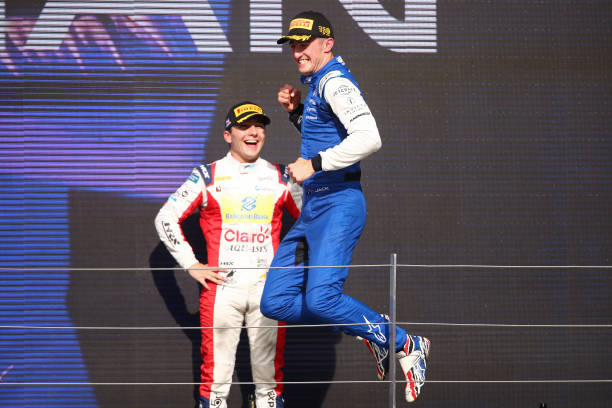 NORTHAMPTON, ENGLAND - JULY 02: Race winner Jack Doohan of Australia and Virtuosi Racing (3) celebrates on the podium during the Round 7:Silverstone Sprint race of the Formula 2 Championship at Silverstone on July 02, 2022 in Northampton, England. (Photo by Joe Portlock - Formula 1/Formula Motorsport Limited via Getty Images)

Jack Doohan raced in Formula 2 for six races last year. He raced for MP Motorsport in the final two rounds in Saudi Arabia and Abu Dhabi. From those, he scored seven points.

The Australian was then promoted to a full season in the Formula 2 Championship, moving up from Formula 3. He joined the team Virtuosi Racing.

Coming into this weekend, Virtuosi Racing were one of the most successful teams in the championship around this circuit. Virtuosi Racing won three races here in the last three years, so with a talent like Doohan, the hopes were high to get another win.

2022 got off to a great start for the young driver as he put it on pole in the first qualifying of the season. He replicated this result in Round Four at the Barcelona Grand Prix. Unfortunately, Doohan struggled to transform his pole position into a race win in both those rounds.

In the previous round in Azerbaijan, Doohan had one of his worst weekends yet. Sadly, he finished outside the top 10 in both Qualifying and the races. In the Sprint Race, he maintained his qualifying position of P11. The Feature Race saw him drop two places to finish P13.

That weekend was not was Doohan would have wanted, but Silverstone has seen the tables turn.

The British circuit is a much-loved track within the motorsport industry. Drivers such as Théo Pourchaire and Richard Verschoor expressed their love the track ahead of the weekend.

For Doohan, however, the track this weekend didn’t give him the positive vibe others had. In Qualifying yesterday, he only qualified P7.

When reflecting on his qualifying lap, Doohan said that he was “a little bit lost and confused” because he thought the “package” the team had was “really strong coming into Qualifying”. However, during the on-track session, they “didn’t really have any pace at all.”

He continued saying that despite the P7 finish, he was “confident” that the rest of the weekend will see some “good” races for him. After today’s Sprint Race, it’s safe to say that his thoughts were correct.

With the reverse grid, Doohan started today’s race in P4, behind Jehan Daruvala (P1), Enzo Fittipaldi (P2) and Juri Vips (P3). The Virtuosi Racing driver competed in some great on-track battles in his bid to get the lead when the lights went out.

To get ahead of Vips, Doohan went down the inside. He had more grip and more drive allowing him to get into P3. He then worked his way past those in front to get into P1, which he maintained for the rest of the race.

After the race, Doohan spoke to FormulaNerds about the intense final lap that saw him and Ayumu Iwasa battle for the lead. Iwasa was putting pressure on Doohan going faster as the clock struck down.

Fortunately for Doohan, Iwasa never made it past him before the chequered flag. After the Sprint, Doohan commented saying that it’s “not ideal when you have someone catching you in the remaining laps on your way to your maiden win.” He continued admitting:

“I maybe pushed a little bit too much at one stage. But to be honest I was managing so much for most of the race so potentially maybe they were a little bit lower in pressure, which enabled them to be a little stronger towards the end. Or maybe I could have managed a bit better on my side.”

Doohan then added that towards the end, he “was trying not to look in [his] mirrors” and just “really focus on [his] own race.” Whilst Silverstone is not an unforgiving circuit like the streets of Baku, as a driver you still don’t want to make a mistake.

When commenting on this, Doohan said he focused on what he was doing “so [he] didn’t make a mistake.” He carried on saying: “I was sure that if I kept doing what I was doing, even if that meant brake a little bit earlier to make sure I made no mistakes, then I would end up taking the win.” He finished by saying “nine tenths of five or 10 seconds, doesn’t matter.”

Where is he in the championship?

Heading into the Feature Race, Doohan is currently joint sixth in the Driver Standings with Dennis Hauger and Marcus Armstrong. All three drivers are on 55 points.

The Feature Race is where the majority of the points are, and starting P7 on the grid, Doohan could be in with the chance of scoring some good points. In Baku, Doohan finished the Sunday in P13, so hopefully the Australian can have a better race here at Silverstone.