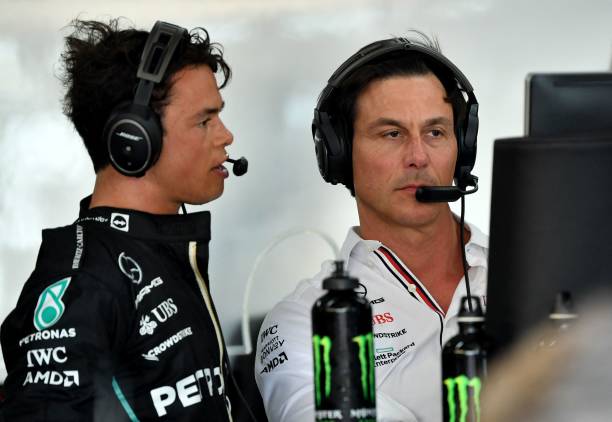 The rookies lined up for an FP1 session

Which young drivers could make their F1 debuts in the remaining race weekends?

From this season, F1 teams must run a rookie in two FP1 sessions. Who are the likely candidates?

The feeder series ladder to the upper echelon of motorsport has been criticised recently. Looking at the relative success of America’s Road to Indy scholarship system, very few junior drivers in F1 actually make it.

To target this and help young drivers feel ready to enter the top tier, a new rule for 2022 obliges teams to invite rookies to drive their cars in two free practice sessions.

With nine races to go, no team has filled both of their available slots.

The Milton Keynes outfit has completed half of its mandatory rookie running so far. In Barcelona, Hitech GP’s Juri Vips replaced Sergio Perez in FP1. At the time, the Estonian was the team’s official reserve driver. However, following his suspension from Red Bull back in June, Liam Lawson inherited his role.

Thanks to the team’s extensive junior programme, they ostensibly have the most choice on the grid. A rookie is defined as any driver who has not competed in more than two F1 races, but has completed the required 300km drive in a Formula 1 car.

For this reason, Dennis Hauger and Jehan Daruvala are unfortunately not in the running. Lawson and Vips drove the 300km at the 2021 Young Driver Test in Abu Dhabi.

Although Lawson was confirmed to take one of the slots at AlphaTauri, he may also get an opportunity to replace Max Verstappen in an FP1 session. Red Bull won’t have many other choices unless they take a gamble and go outside of their junior programme.

The Italian team are yet to run anyone other than Charles Leclerc and Carlos Sainz in their practice sessions, but there seems to be one clear rookie contender.

Ferrari racing director Laurent Mekies confirmed that the plan is to give the slots to Robert Schwartzman. The 22-year-old is exempt from the FIA’s ban on Russian-licensed drivers as he now holds an Israeli license.

As reported by Formula 1, Mekies said:

“For us, it’s Robert Shwartzman that will do our two FP1s. We haven’t exactly decided on which events it’s going to be, [but] you are right in saying that you would not pick races like Singapore or races where the race drivers need more running.”

Nyck de Vries is the obvious candidate for Mercedes. He took Lewis Hamilton’s spot at Paul Ricard, finishing an impressive ninth on the timing sheets.

Junior driver Frederik Vesti would likely jump at the chance to drive George Russell’s W13 this season. He is currently in his first year of Formula 2 and certainly has the potential to be a future Mercedes legend. However, like Hauger and Daruvala, he is yet to complete the necessary 300km in an F1 car.

Once the Dane ticks this off, he will open himself up to a range of new opportunities. But for now, expect to see another appearance by de Vries for Mercedes.

Up until a few weeks ago, the natural choice for Alpine would have been Oscar Piastri. A member of the Renault Sport Academy since 2020, the Aussie became the official reserve driver for the rebranded team this season.

However, the complications with his 2023 seat may have repercussions in regards to the mandatory FP1 running. Piastri appears to still be contractually linked to Alpine, but talk of the team taking him to court could bring an end to that.

So who could Alpine give the opportunity to, if not Piastri? Academy driver Jack Doohan could be next in line – he completed an F1 test at Monza earlier this year. In addition, if Daniel Ricciardo doesn’t take the free seat at Alpine, the F2 driver may be a surprise candidate.

Now that Piastri is rumoured to be tied to the papaya team, they could bring him in as their rookie racer. Technically, he has been one of McLaren’s reserve drivers since Ricciardo was struck down with Covid-19 earlier in the season.

However, IndyCar driver Pato O’Ward has been the team’s go-to recently; he made his debut in the Young Driver Test last year, so is eligible for a Friday license.

Furthermore, fellow IndyCar competitor Colton Herta has been linked to the team. The young star is set to test with McLaren at some point after spending the Miami Grand Prix embedded within the team.

For Alfa Romeo, the choice may have already been made in the form of Theo Pourchaire. The Frenchman is a member of the Sauber Academy and is currently in the title battle in his second full year of F2. Pourchaire has been touted as a future F1 star, so will need all the opportunities he can get.

If you want to be technical, Zhou Guanyu ticked the box for the team as he had not started two races when he drove in the practice sessions in Bahrain and Saudi Arabia. However, team principal Frederic Vasseur is still likely to give Pourchaire a chance.

It was confirmed yesterday that Antonio Giovinazzi will drive in FP1 for Haas at both the Italian and United States Grands Prix. Of course, he is far from a rookie after driving for three seasons with Alfa Romeo.

This leaves Haas with an even more limited number of races to fill their mandatory rookie slot. As a Ferrari customer team, they also have access to Schwartzman, but may be more likely to plump for Pietro Fittipaldi.

The Brazilian is on the cusp of being considered a rookie after taking Romain Grosjean’s place in two races during the 2020 season. Nonetheless, he fits the criteria and is Haas’ reserve driver.

Liam Lawson is set to drive for AlphaTauri in Belgium this weekend, making his Formula 1 debut. Now that Vips is seemingly out of the picture, Red Bull could begin to prioritise the Kiwi.

welcome back to the cockpit @LiamLawson30! ✌️

the young Kiwi will make his official F1 session debut this weekend at Spa 👌 taking over the wheel of Pierre's AT03 pic.twitter.com/6ZxwbDcPv5

There are no obvious candidates for Aston Martin. Nico Hulkenberg is the British outfit’s reserve driver, but like Giovinazzi, he cannot be considered a rookie.

Nick Yelloly drove in the Abu Dhabi test last year as part of his simulator driver role, but he does not have enough points for a Friday license. Therefore, Aston Martin will have to find a driver through a different route.

Before driving for Mercedes in France, Nyck de Vries made his debut in Barcelona with Williams. This seems slightly counterintuitive when you look at the team’s extensive list of potential rookies.

Jack Aitken drove for Williams just once, at Sakhir in 2020, so he still counts as a rookie. If the team wanted to go for a more inexperienced racer, they also have Logan Sargeant. The American is the latest addition to Williams’ talent program and has already clocked up the necessary miles in an F1 car.

With current driver Nicholas Latifi hanging onto his seat for dear life, could Sargeant be in line for a promotion? If so, a chance to drive in Williams’ remaining rookie FP1 session could be beneficial.