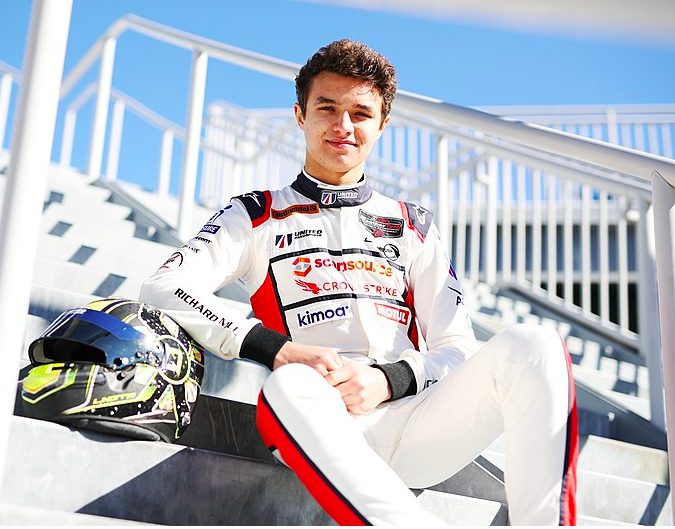 The rise of Lando Norris: through the years

Lando Norris is one of the most promising prospects in Formula One, but how did he get to this point?

However, he gained a lot of attention this year, which worked out well in his Favour. Norris made his way into the first Formula series – Formula 4.

At age 15, Lando Norris moved up into F4. Not only did he progress into the series, but he also won it. The Carlin driver earned an impressive eight wins in his first season and was crowned the FIA Formula 4 Champion of Great Britain.

He dominated the championship. On top of the wins, he gained ten pole positions and 14 podiums in 24 races. With his impressive performances, the young brit finished above the now Indy Car driver Colton Herta in the standings.

Norris’s first venture in 2016 was the Toyota racing series in New Zealand. Of course, he was crowned as champion after winning six out of the 15 races. This allowed the Brit to win the title, just ahead of Formula 2’s Jehan Daruvala.

After this, Norris entered the Formula Renault 2.0 series, for both the Eurocup and the Northern European Cup (NEC). Unsurprisingly he won both, winning 10 races in total and recording 10 consecutive pole positions in the Renault 2.0 NEC championship.

This was Norris’ most successful year in terms of trophies. A year that also saw him progress into Formula 3, which he would soon go on to dominate.

At the age of 18, the Brit was being noticed, by none other than McLaren who signed the driver for their academy. In this season, Norris took Formula 3 by storm. He became the youngest driver to ever win the championship, winning a total of nine races. His fifth racing championship in just four years.

In the 30 rounds that season, he ended up on the podium on 20 occasions and recorded eight pole positions. The season ended with Norris 97 points ahead of Callum Illot, who is now a highly rated driver in Indy Car.

After winning Formula 3, Norris went on to Formula 2 with Carlin. While still having an impressive campaign in his new division, the 19-year-old could only win one race in his debut season. With a hat load of podiums, he managed to finish second in the standings – behind George Russell but in front of Alex Albon.

On top of the successes in Formula 2, he also got promoted to McLaren’s Formula One test and reserve driver. There were many practice sessions for young Norris this year, with the driver notably setting the fastest lap in one of Hungaroring’s practice sessions.

Now he was in the big leagues. Lando Norris’ meteoric rise through the divisions has finally reached Formula One. Alongside his new ‘best mate’, Carlos Sainz Jr, Formula One’s new number four had a great season.

He ended the season with 49 points, placing him 11th in the championship. A good start for a rookie season. The best result of the season came in the second round of the campaign, in Bahrain, where Norris guided his McLaren to sixth place.

Lando continued to impress in Formula One in his second season. In the first race of the year, he famously finished on the podium. Fans will remember him setting the fastest lap on the last lap to finish in front of Lewis Hamilton, a remarkably iconic race for McLaren’s new star.

McLaren finished third in the Constructors championship, thanks to a stellar season from Lando and Sainz. Norris gained more than double last year’s points with 97, after gaining another five top-five finishes in the campaign. Another brilliant year for the Briton.

Once again, Lando Norris was superb this season. He gained another four podiums for his tally and improved his career best finish to second after the Monza grand prix. His P2 drive helped McLaren take the season’s only ‘1-2’ finish, assisting Daniel Ricciardo’s win.

His good work for the team this year earned the driver a brand-new contact until 2025. At the time, this was the longest standing deal, out of the drivers, which perfectly shows his worth to the team. Lando finished sixth in the standings and gained his first F1 pole in the Russian grand prix – yeah, let’s not go into that…

It’s another great season for the Brit. Not quite as good as last year, but under the circumstances, he’s driving the wheels off the car. McLaren is considerably slower than their rivals, yet Lando still managed to earn a podium finish in Imola.

He currently sits in seventh place in the driver’s standings. Behind the likes of Red Bull, Ferrari, and Mercedes – Norris has solidified himself as ‘the best of the rest.’ Only time will tell if he can replicate some of last year’s results, but he certainly has the talent to compete with the best now.

The sky is the limit for Lando Norris. A six-time podium finisher, a one-time front runner, he just needs to win a race. He came close in Russia and Monza but given the car you would be wise to bet on the 22-year-old.

As he is signed for McLaren until 2025, it’s likely that he will stay as their first driver until then. But don’t think that this will limit his career. McLaren have improved their car massively from the start of the season and they appear to be on the rise. Lando fans will be hopeful for a car that matches his talent, and they will be looking forward to seeing what he does in the future.