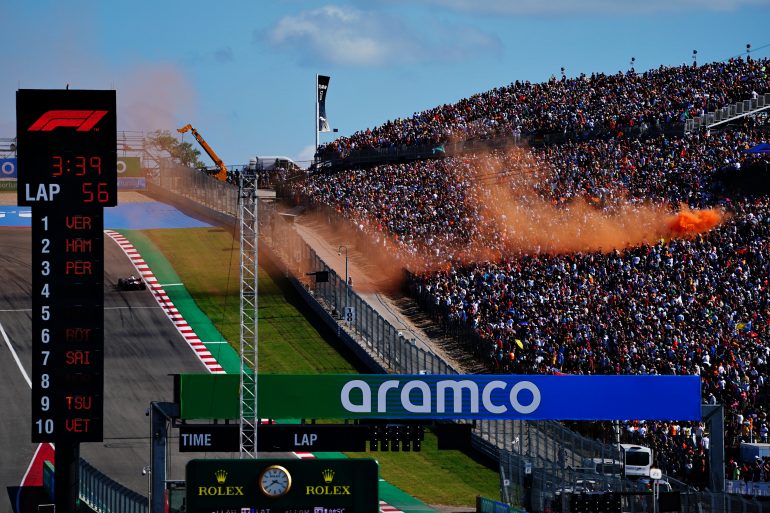 The 2021 United States Grand Prix was the biggest F1 race – ever.

They say everything is bigger and better in the United States – and looking at the Formula One weekend in Austin, this very much seems to be the case. Ahead of the US Grand Prix, chairman of the Circuit of the Americas Bobby Epstein had already predicted this weekend to surpass previous attendances. And the crowd did not disappoint.

You thought Silverstone was full? You thought the Dutch crowd in Zandvoort knew how to party? Austin seems to have surpassed all of that, and more. COTA welcomed a record attendance: 400,000 spectators across the four days, with 140,000 on race day alone — having added capacity with new grandstands around the final sector.

Amazing atmosphere in Austin, with 400,000 spectators in three days. Congratulations to @Max33Verstappen for the win and @LewisHamilton @SChecoPerez who complete the podium. The battle for both championships continues. Looking forward to Mexico#F1 #USGP ?? pic.twitter.com/DtFMqrIW0z

A carnival-like atmosphere, packed grandstands and high-class music entertainment in the evening attracted more visitors than any other F1 race before. Not to mention the great championship battle between Max Verstappen and Lewis Hamilton. Previously, F1’s biggest race was the British Grand Prix, which saw an audience of 351,000 in 2019. The same year, Austin hosted only 268,000 spectators across a weekend.

Arguably, a lot of the interest boost can be traced back to Netflix’s successful series ‘Drive To Survive’. Currently filming Season 4, the show has massively increased the profile of the sport across new age groups and markets across the world. The series debuted on Netflix in March 2019, and the sports’ profile has skyrocketed since. Earlier this year it was reported, that ESPN viewership for F1 in America had gone up 50% from 2020, and 36% from 2019.

When the series first debuted, it already had a huge impact on F1’s audience in America. Raceday ticket sales reportedly rose 15 percent in 2019 from 2018 after DTS was released. “We’re only now really seeing it. We can definitely attribute that growth to the Netflix series giving people access to the behind-the-scenes personalities. It definitely opened some eyes that there are people paying attention here.”, Epstein said to the New York Times.

“I think it’s got to be the single most important impact for Formula 1 in North America,” said Zak Brown to the New York Times this summer. “Almost every comment you get from someone out of the U.S., they reference ‘Drive to Survive.’. People are going from ‘I’ve never watched a Formula 1 race in my life’ to ‘I’ll never miss a Formula 1 race again.’ The series set out to show the personalities and inner works of the sport. Together with Liberty Media’s approach to overall media use, and social media communication, F1 has been able to build a much bigger audience that’s focussed on more than just hard racing facts and results.

According to FlixPatrol, which gathers data on movies and TV shows, “Drive to Survive” ranked No. 1 for TV series worldwide shortly after Season 3’s release in March this year. F1’s rise across the pond was obvious outside the circuit this year as well. On the drivers’ parade ahead of the race on Sunday, Charles Leclerc shared how much more he’s been recognised since arriving in America this time around compared with previous years.

McLaren’s Lando Norris, named F1’s second-most popular driver behind Verstappen in the latest F1 fan survey ahead of the weekend, noticed the same thing. Asked by ESPN if he’d noticed a difference, the Brit said: “Yes. It’s been crazy. Just away from the circuit, even in the hotel every morning and evening, they’re waiting there. I feel like they just never sleep!

“We had a lot of fans last time, I feel like there’s a lot more than there was in 2019. It’s pretty cool to see how much it’s engaged people in America, because it’s pretty awesome.”

Whilst title contender Max Verstappen recently shared that he will not feature in the upcoming season, once again, this former team-mate Daniel Ricciardo has seen a major popularity boost since starring in every season of the series. He shared he was surprised at how much he was being recognised in New York the days before heading to Austin.

With the Miami GP on the calendar for 2022, and rumours of additional races in the States being added in future seasons as well, the Netflix effect has definitely had a positive impact on Formula One’s profile in America. The crowds in Austin this weekend for sure proved that.