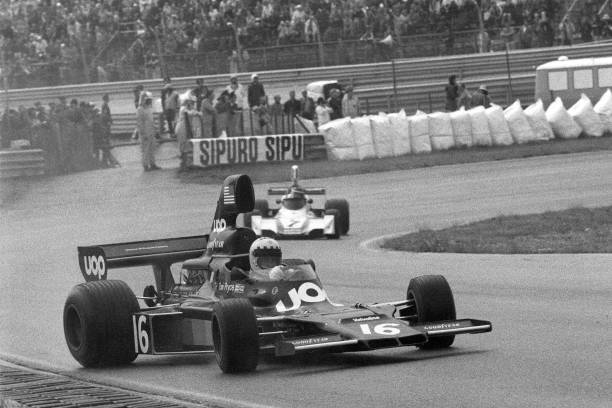 It’s been 47 years since an American team last scored a pole position in Formula 1.

Kevin Magnussen may have started the 2022 São Paulo Grand Prix from eighth place, but he still claimed pole position for the weekend.

It was a maiden pole for the Danish driver, as well as for the Haas F1 Team. That meant that this past weekend marked the first time an American team had scored a pole position in 47 years.

Perhaps it was a bit of a fluke that saw the team in eighth place take the spot of the fastest car in Interlagos. But Magnussen was one of eight drivers to set a fast lap in the first few minutes of Q3, so it wasn’t all luck.

47 years ago marked the 1975 Formula 1 season. Emmerson Fittipaldi was the reigning driver’s champion, and McLaren was coming off the back of their very first constructor’s championship.

There were three American teams on the grid that season, Vels Parnelli Jones Racing, Penske Cars, and UOP Shadow Racing. The 1975 season saw four different teams take pole position, and one of those teams was Shadow Racing.

Shadow Racing was a team founded and operated in the United States at that time. They began their Formula 1 journey in 1973 and finished eighth in the constructor’s championship two years in a row.

In 1975 the two Shadow Racing cars were piloted by French driver Jean-Pierre Jarier and the British Tom Pryce. They started out surprisingly strong, with Jarier taking pole position in the first two races of the season. Unfortunately, he failed to start the first race in Argentina after a transmission issue and retired from the following race in Brazil with an engine failure.

In fact, Jarier went on to retire from ten of the 14 races that season, despite having more pace than many other teams. Pryce was also a victim of many retirements, with six throughout the season.

Pryce set a lap time of 1:19.36 around Silverstone, 0.14 seconds faster than Brabham’s Carlos Pace. In the race, Pace took the lead at the start and Pryce slipped down, but after rain and some damage for other drivers, he regained his lead. Sadly, he crashed out in wet conditions two laps later.

Shadow Racing, the team fast enough to score three pole positions in one season, didn’t manage a race win in 1975. Pryce would get some redemption, however, with a fourth place the next round in Germany, and a podium in the Austrian Grand Prix.

The Shadow Racing team would go on to score their best Constructor’s finish yet in 1975, placing sixth overall. The following season they would switch to a British licence and become Lucky Strike Shadow Racing. It was the first time in Formula 1 that a team changed their nationality.

Shadow Racing never topped their sixth place in the constructor’s championship, although Alan Jones would score the team’s only win in the 1977 Austrian Grand Prix. After only qualifying for one race in 1980, that was it for the American-turned-British racing team.

47 years went by before Kevin Magnussen and Haas took pole position at the 2022 São Paulo Grand Prix and become the next American team to do so.

If we have to wait another 47 years, we won’t see an American team on pole until 2069. But hopefully, with the rise of interest in Formula 1 over in the United States, it won’t be quite that long this time.