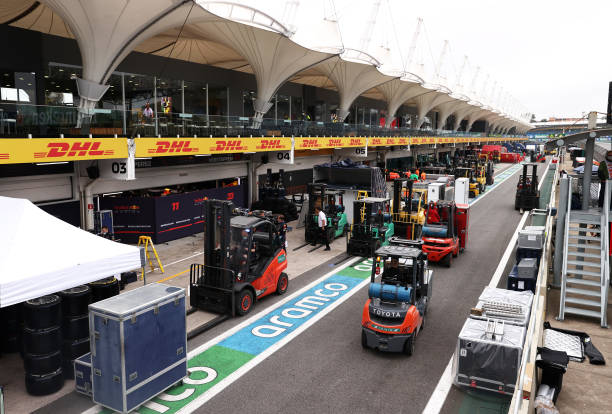 The hypocrisy of F1’s Baku/Montreal double-header

What happened to F1’s love of the environment?

Forcing teams to fly 15 hours across the world makes a mockery of F1’s sustainability targets. At a time when the upper echelons of motorsport pride themselves on lowering their carbon footprint, this double-header contradicts everything the sport allegedly stands for.

Back in 2019, when Chase Carey was still CEO of Formula 1, he led an innovative campaign to tackle the sport’s negative impact on the environment. In recent years, there has been increasing criticism over the energy teams use over the season.

In every sport, competitors must travel around the world and consume vast amounts of energy in a bid to eventually entertain the public. It is believed that cars are one of the biggest polluters, so F1 faces greater scrutiny than most other sports. People began to think that anything related to cars was automatically bad, and they weren’t too far from the truth.

The shift towards sustainability

During the launch of the sport’s 2019 campaign, Chase Carey commented on the importance of the move. He said: “In launching F1’s first-ever sustainability strategy, with an ambitious target to be a net zero carbon sport by 2030, we recognise the critical role that all organisations must play in tackling this global issue.”

When F1 first unveiled this plan, it was estimated that the 2019 season produced 256,551 tonnes of carbon dioxide. To put this into perspective, that figure is the equivalent of 55,795 passenger vehicles being driven for one year.

Critics may have instantly jumped onto the racing itself. After all, cars equal bad, right? In reality, just 0.7% of the carbon footprint came from power unit emissions from the actual F1 cars.

Racing has never been the main problem. Formula 1 is internationally acclaimed for its extremely efficient engines and has a history of developing technologies that are used in everyday life.

The far more damaging element of the sport is the logistics. As fans, we don’t experience the difficulties of spending the entire season flying from country to country. We get the luxury of sitting at home watching the action unfold, without worrying about what teams must go through for the races to even happen.

Going back to that 256,551 tonnes of CO2, 45% of that originated from logistics. According to the 2019 report, this includes “all road, air and sea logistics across the sport including the movement of teams’ equipment, F1 equipment, Paddock Club equipment and race tyres”.

It’s easy to view F1 as a single body, but that’s simply not the case when it comes to travelling between races. When you consider the teams, drivers, journalists, and sports representatives all taking different planes, it quickly adds up.

F1 will always be a global sport – there’s no doubt about that. Part of the excitement is witnessing the best racers tackle conditions in almost every part of the world.

That doesn’t have to change. What needs to happen is a reorganisation of how and when teams should travel from race to race.

Last weekend’s outing in Baku produced exhilarating races in both F1 and F2, and few can argue otherwise. It’s also likely that the much-anticipated return to Canada this week will fulfil the expectations of drivers and fans alike. Both of these things could still be true without those involved having to fly 15 hours across the world.

When F1 places such an emphasis on reducing its environmental impact, it seems hypocritical to have back-to-back races on different continents. As long as this stays in place, it doesn’t matter how much innovation the sport sparks – it will never be enough to balance the effect of this poor logistical decision.

And it’s not just the environmental impact we have to be concerned about. With teams like McLaren partnering with mental health charities, more people are considering the stress F1 employees suffer. Teams and drivers naturally face immense pressure to perform, but the constant travel takes a toll on everyone involved.

The most irritating part of all this is that there is a logical solution. It has been proposed before that F1 should group races by continents, thereby lowering the number of flights taken.

Instead of flying from Baku to Montreal, the Azerbaijan Grand Prix follows Abu Dhabi, Jeddah, or Sochi (if it ever returns). Likewise, we could race in Canada at a similar time to Miami and Austin.

When there are so many other viable options, it just seems irresponsible to go through such long journeys.

How are the drivers feeling?

Many fans took to social media to comment on the arduous journey teams are making this week. However, the drivers themselves are understandably more focused on the race.

Due to the pandemic, F1 has not competed in Canada since 2019. This means that drivers like Yuki Tsunoda and Mick Schumacher have never driven an F1 car in Montreal. It will also be the first time resident Canadian Nicholas Latifi has partaken in his home race.

Fellow Canadian Lance Stroll said:  “Obviously I am super excited to be back in front of a home crowd again.

“It is a shame we haven’t been to Montreal for the past couple of years, so there will be lots of work and preparation to get our car ready for the first practice sessions. As a team, we have made solid progress so far this season, so hopefully, we can achieve a good result in front of my home crowd.”

Although the build-up is as intoxicating as always, take a moment to consider the potentially damaging impact this last week has had on the environment, drivers and employees alike.