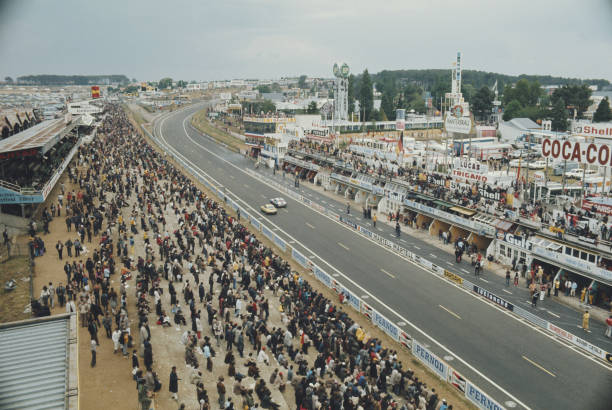 View of racing cars passing the pits on the straight during the FIA World Challenge for Endurance Drivers 1972 24 Hours of Le Mans race at the Circuit de la Sarthe in Le Mans, France on 10th and 11th June 1972. (Photo by Rolls Press/Popperfoto via Getty Images/Getty Images)

The History (and future?) of The Triple Crown

Two of motorsport's most historic and iconic races are just days away.

One of motorsport’s most prestigious achievements is the Triple Crown, winning the three biggest events in racing. Two of those events are happening this weekend on the same day, the Indianapolis 500 and the Monaco Grand Prix.

With both historic races happening on Sunday, it’s well worth bringing up the iconic racing title they’re both involved in and taking a look into the history of one of motorsport’s most difficult feats to achieve.

What is the Triple Crown?

There are three motorsport events that are generally considered to be the biggest races in the sport, the Monaco Grand Prix, the Indianapolis 500, and the 24 Hours of Le Mans. While there were years when the Indy 500 and the Monaco Grand Prix were both a part of the Formula 1 calendar, the three races now take place in three separate categories of racing, those being the Formula 1 World Championship, the NTT IndyCar Series, and the FIA World Endurance Championship.

To complete the Triple Crown, a driver has to win all three of these races. Only one driver has ever successfully completed the Triple Crown: Graham Hill. Hill made the first step by winning the Monaco Grand Prix in 1963 with BRM. He would go on to win that race four more times, but for the record, you only need to win it once.

Three years later, Hill would win the Indy 500. Then, in 1972 and alongside Henri Pescarolo, Hill would take victory at the 24 Hours of Le Mans and complete the Triple Crown.

Some people have argued that the Triple Crown must include winning the Formula 1 World Championship. As Hill did this (twice) and no one other than him has completed the Triple Crown, it’s a bit of a moot point for now.

Granted, it’s become harder to win all three races since the days when the Indy 500 and the Monaco Grand Prix took place in the same championship. Rarely do Formula 1 drivers who are good enough to win at Monaco make the switch to IndyCar, and vice versa. And in and of itself, Formula 1 is such a prestigious and busy series that you almost never see its drivers doing any other racing outside of it.

Of the three, Montoya still needs to win the 24 Hours of Le Mans, and Alonso needs to win the Indy 500. Of the two, Montoya has an easier task. In fact, he won the LMP2 Pro-Am category of Le Mans just last year, but unfortunately, it has to be an overall win to count towards the Triple Crown.

“The last two attempts in Indy with the aeroscreen made me feel the car a little different,” said the Formula 1 driver. “And talking with some of the colleagues there, definitely the cars are more difficult to drive and difficult to follow each other. So it is less fun.

“In 2017, there was a lot of overtaking, and I loved that race. There was a little bit less love in the last couple of years when you cannot overtake. And there is the danger factor. In the Indy 500, there are a couple of big crashes every year.”

Will There Be A Second Triple Crown Winner?

It’s been 50 years since Graham Hill became the first and only driver to achieve the Triple Crown. As we know, Montoya and Alonso are both close, but Alonso has no current plans to race at the 500. So, as of now, the most likely driver to become the second Triple Crown winner is Juan Pablo Montoya.

But there are other options outside of drivers who have already won two of the three races. In fact, the next driver to take the Triple Crown might not even have won any of them yet.

Take IndyCar driver Pato O’Ward for example. O’Ward starts seventh at Sunday’s running of the Indy 500, and is high on the list of drivers with a chance to win it. He has also been connected to rumours concerning a seat at McLaren’s Formula 1 team in the near future. So he could very well have a shot at winning the Monaco Grand Prix as well.

As far as the 24 Hours of Le Mans, O’Ward has been endurance racing for a while. He has a brilliant track record in the WeatherTech SportsCar Championship. O’Ward has two class wins at the 24 Hours of Daytona, in 2017 and 2022. Based on his proven ability, a Le Mans win would not be outside the realm of possibility, or even unlikely.

Of course, all of that is pure conjecture. O’Ward has a long way to go before he’s even in the hunt to win the Triple Crown. But the point remains that there are drivers who could very well be looking to join Hill within the next ten years.

This is going to be a very special place to be! 😍

Nico Rosberg: Ferrari are now in ‘nothing to lose' territory

Nico Rosberg said that Ferrari's run of bad form has put them in "nothing to lose" territory as they struggle to keep up with Red Bull.