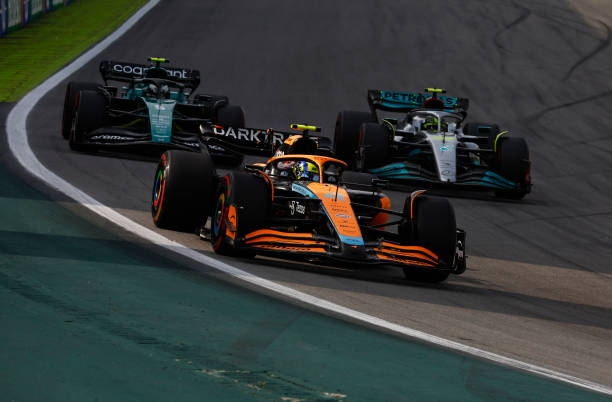 The constructors’ battles that aren’t over yet

Plenty of teams haven't solidified their finishing position yet

With one race left in the 2022 Formula 1 season, there are still constructors’ battles being fought.

Red Bull Racing wrapped up the Formula 1 constructors’ championship weeks ago, but there are still close rivalries further down the field that have yet to be settled.

Stakes are high for several teams at this weekend’s Abu Dhabi Grand Prix, as one place in the constructors’ championship could mean the difference between millions of dollars.

Some teams have as little as two points between them headed into one final race. Four clear battles are still going on, as Red Bull has secured first place and Williams is likely to stay in last.

But between the eight teams in the middle, there could be plenty of place swapping following the Abu Dhabi Grand Prix. For these sixteen drivers, every single point will count.

It’s been a disappointing season for Ferrari and Mercedes, who both expected to play a much larger part in the title fight against Red Bull. Ferrari, who started strong, and Mercedes, who started much further down the pack, have found themselves close competitors for second in the championship heading into Abu Dhabi.

With 524 points, Ferrari is currently ahead of Mercedes by 19 points. It’s a more substantial gap than most of the other teams, but the Silver Arrows have been a formidable force in the second half of the season. Just last weekend the team took their first 1-2 finish of the season, and while Charles Leclerc and Carlos Sainz finished third and fourth behind them, it’s still cause for concern.

At the beginning of the season, the performance gap between these two teams was significant, but it’s grown smaller and smaller throughout the year. Now, with one race to go, the Italian constructor is under threat from Mercedes, and could very well be overtaken for the runner-up position if they have a less than perfect weekend.

McLaren and Alpine finished fourth and fifth in 2021, and they’re fighting for these same positions once again. Only last year McLaren was in the fight for third, and this year they’re 19 points behind Alpine going into Abu Dhabi.

These two teams are fighting for “best of the rest”, the unofficial award for the team outside the dominant top three. It’s pretty clear that Alpine has been the best of the rest this season, but McLaren has been consistent enough to still be in the battle with one round to go.

This battle is arguably the one with the least chance for the team currently down to win. Sure, Alpine has had some unlucky results these past couple of weekends, but they’ve been consistently strong enough that McLaren won’t catch up without some more bad luck for Team Enstone.

Alfa Romeo, who finished ninth in 2021, made a huge step up to be in the fight for sixth place this year. In fact, they’re five points above Aston Martin, a team that had a fall from grace of sorts after finishing fourth in 2020.

These two teams have been close competitors this year. While last year, Aston Martin finished 64 points ahead of Alfa Romeo, they’ll finish behind them this year if they don’t have a good weekend. Lance Stroll and Sebastian Vettel, who made contact in the Sprint Race last weekend, will need some better teamwork to make up the five-point deficit to Valtteri Bottas and Zhou Guanyu.

For the Aston Martin drivers, it’ll be a hard task, even if Alfa Romeo doesn’t score at all. The team’s best result this season came at the Singapore Grand Prix, when Stroll and Vettel finished sixth and eighth respectively, scoring 12 points.

As for the Alfa Romeo drivers, Bottas will likely take tenth place in the championship, unless Vettel outscores him by 14 points this weekend. Zhou, down in 18th overall, is six points behind AlphaTauri’s Yuki Tsunoda.

The closest battle between any of the Formula 1 teams is between Haas and AlphaTauri. The two are separated by just two points, with Haas currently holding eighth place overall. But the Red Bull sister team is close enough behind that the chances are good for them to take that place.

One of these two teams has made a jump in performance since last season while one has suffered. Haas had their worst season in Formula 1 to date in 2021, failing to score any points and struggling at the back of the pack at almost every single race. For the American constructor to come back and scored 37 points (and a pole position) so far this season is astounding.

AlphaTauri, on the other hand, has had better years. Last season, they finished a comfortable sixth in the standings. This year, scoring over a hundred fewer points, has been difficult. They’ve had some reliability issues but their main problem, as referenced by both Pierre Gasly and Yuki Tsunoda, is simply a lack of pace in the car.

For both teams, scoring points on a race weekend has been something to be celebrated. That being said, there’s still a possibility that at least one of these teams could make it into the points, which could be the difference between finishing eighth and ninth.

So even though out front the battle has been lacking, there’s plenty of reason to watch the Abu Dhabi Grand Prix this weekend. Eight different teams will be battling for their place in the constructors’ championship, and they’ll all be hoping to stay out of trouble and get a good result one final time this year.