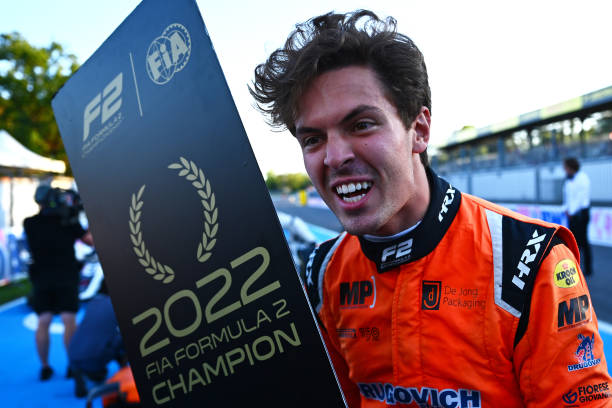 The bizarre circumstances that decided each of the 2022 championships

2022 has been a season of unusual and controversial championship rounds

F1 and its feeder series produced some incredibly deserving winners, but the 2022 championship-deciding rounds were far from conventional.

Following a disappointing Singapore Grand Prix, this weekend’s trip to Japan was all or nothing for Max Verstappen. Everyone had calculated exactly what he needed to do to take his second title, and fans were in for an exciting race.

But Sunday was marred with confusion and fury, overshadowing the Dutchman’s victory. Just like its feeder series, F1’s 2022 championship decider was nothing if not unorthodox.

In September, F3 and F2 headed to Monza to support F1. The title fight was closer than ever before as six drivers had the potential to win the championship; viewers were ready for a close-fought 22 laps.

It would be a lie to say that the race was boring – the tension was palpable and there were incidents aplenty. However, on this occasion, the incidents went too far.

A nasty collision between Kush Maini and Brad Benavides brought the race to a shuddering halt as the drivers were sent back to the pitlane. It looked like the race would get underway with six laps to go, but unfortunately, it was not restarted.

That was disappointing enough, and that was before all of the time penalties. A multitude were announced whilst competitors lingered in the pits – this was all as they believed they would race again.

It seemed that the most crucial penalty was a five-second time penalty for the man at the top of the standings, Victor Martins. He had a lead of just five points over Isack Hadjar going into Monza. In addition, impressive late performances from Zane Maloney and Ollie Bearman had dragged them into contention.

Martins’ penalty meant he was demoted to fifth place, one below where he needed to finish to claim the title. However, a subsequent penalty for Jenzer’s William Alatolo rescued his championship, promoting the Frenchman to the fourth place he wanted.

Following the complications, the FIA’s suspension of the race was heavily criticised. Time pressures were largely to blame as there were fears that resuming the race would cause delays to the day’s other events.

As reported by RaceFans, F2 and F3 CEO Bruno Michel said afterwards: “It’s never good to end a championship like that. We were really having fantastic racing with all the contenders being at the front of the race. So it was a very interesting moment.

“Then we had this accident and I was quite happy that the FIA suspended the race because for me that was the best way to finish it properly. And then unfortunately it didn’t come back.”

In total, it took 26 minutes between the initial stoppage and Martins being announced as the F3 champion. It was this confusion that tainted the final round for fans and competitors alike.

“Unfortunately it was a little bit complicated with the penalties coming in at the last minute and nobody really understanding what it was. So I must say it created some kind of frustration with the teams and with the drivers, which is never good enough.”

A factor that made the Formula 3 title decider even more controversial was that the F2 championship had been wrapped up a day prior. This means that there would not have been much of an effect if the F2 race had been delayed, as there was not much riding on it.

Compared to the chaos that characterised the F3 race, the F2 sprint in Monza was significantly less confusing.

MP Motorsport’s Felipe Drugovich was embroiled in a season-long title fight with Sauber Academy driver Theo Pourchaire. Although the gap had opened up between the two, the pressure was still on for the Brazilian to clinch the championship.

Drugovich rose to prominence this year, admired for his dominant and confident driving style. He ended 2022 in a class above the rest of the field. Impressed by his season, Aston Martin snapped him up to join their brand-new development programme.

The 22-year-old didn’t get to experience the traditional electrifying team radio messages, or the celebrations as he crossed the line. Instead, he retired on lap one of the race and watched the rest of it unfold from the pit wall.

While it may have been an underwhelming race, his rival also failed to score points. This allowed Drugovich to wrap up the championship with three rounds to go.

Finally, possibly the most controversial championship decider of 2022. We really should have seen that the red flag on the first lap was some kind of foreshadowing.

The near-miss involving Pierre Gasly and a recovery vehicle was a mess in itself, but it was not the only strange incident.

When the race was eventually restarted, there was less than an hour of racing remaining. As the time slipped away, Verstappen built a healthy lead of around 19 seconds over Charles Leclerc.

Things went from bad to worse for the Monegasque. A last-minute charge from Sergio Perez resulted in a tight battle between the two. This saw Leclerc leave the track at one point, and he was rapidly handed a five-second penalty.

A point of contention in this race was how points were awarded. Only 28 laps were completed, leading many to believe that full points would not be given. Despite this assumption, Verstappen received the full 25 points.

Furthermore, it looked like the race ended while there were still a few seconds remaining on the timer. If it did indeed finish earlier than anticipated, this would deem Leclerc’s penalty void.

A complete rundown of the complications of the Japanese Grand Prix can be found here.

None of this is to say that Martins, Drugovich and Verstappen do not deserve their titles. Each of them demonstrated untouchable talent this season and wholly earned their victories. It’s just a shame that they were all awarded in somewhat questionable circumstances.