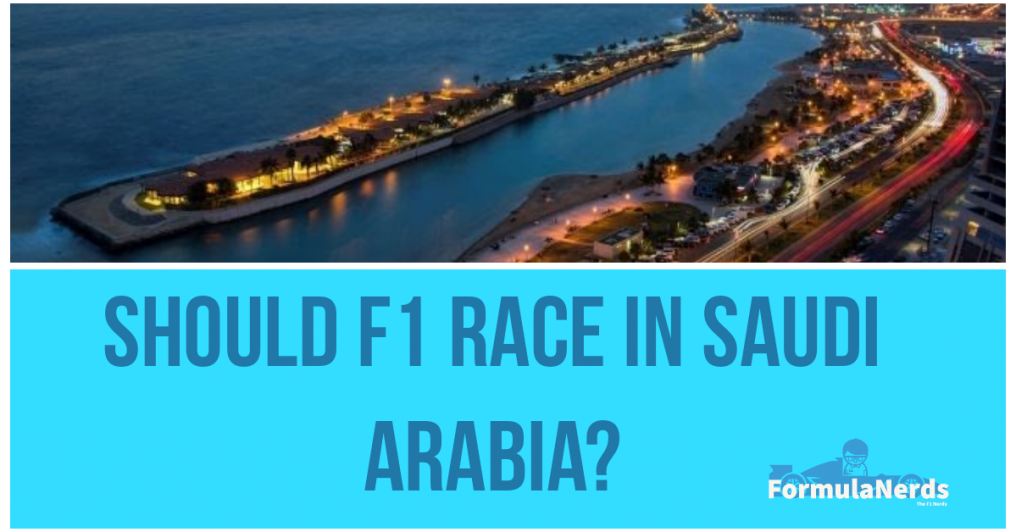 Should F1 race in Saudi Arabia?

As the announcement that Formula One will race in Saudi Arabia from next year in a lucrative 10 year deal, it drew a lot of criticism from many involved in the industry.

The inaugural Saudi Arabian Grand Prix will be held in November 2021 around the city streets of Jeddah, providing a picturesque backdrop of the Red Sea. It will also be the sports’ second night race, following the success of Singapore.

Chase Carey, Formula One’s Chairman and CEO, reacted to the announcement with a statement. “We are excited to welcome Saudi Arabia to Formula 1 for the 2021 season and welcome their announcement following speculation in recent days,” explained Carey. “Saudi Arabia is a country that is rapidly becoming a hub for sports and entertainment with many major events taking place there in recent years and we are very pleased that Formula 1 will be racing there from next season. The region is hugely important to us and with 70% of the population of Saudi being under 30, we are excited about the potential to reach new fans and bring our existing fans around the world exciting racing from an incredible and historic location.”

The announcement also brought a wave of criticism, especially from human rights organisations. They have described the decision to race there as “heinous” and a blatant attempt at sports washing to legitimise the country’s views on human rights. With Formula One recently committing to equality, inclusivity and diversity with their “We Race As One” campaign, you can see that such a decision to take the sport to Saudi Arabia would not make sense.

Minky Wordon, the Human Rights Watch Director overseeing sport, expressed her concerns and does not believe the country are allowing the sport to race for the right reasons.

“Sporting bodies like F1 and the FIA cannot ignore the fact they, and the fans, are being used for sportswashing. It’s part of a cynica, strategy to distract from Saudi Arabia’s human rights abuses, detention and torture of human rights defenders, and womens’ right activists,” she explained.

” F1 has made human rights commitments and should explain how the company’s operations will improve human rights in Saudi Arabia. Have F1 staff used their negotiations with Saudi leaders to advocate for the release of womens right activists whose only crime was advocating for the right to drive? Fans, media and race teams should use this moment to say their sport is should not be associated with such serious human rights abuses.”

Well they won’t though will they? Formula One is a sport, but it is also a business. The world’s leading integrated energy and chemicals company, Saudi Aramco, are a global F1 partner. The partnership has massive potential within the sport to develop a more sustainable fuel and power unit pairing. Money definately talks in Formula One and Saudi Arabia has plenty of it.

The country has hosted large sporting events, most notably the Dakar Rally this year and Formula E in 2018. The sport wants to bring together cultures and countries across the world to share the passion and excitement of motor racing. But does it make the decision morally right?

Fans have been pretty excited about the prospect of a new circuit in a new country. Personally I don’t think we need another new track, it comes as a cost. The price being paid is losing circuits that provide excitement and lots of action and replacing them with tracks that give us extra time to nap. It has saddened me these last few years seeing Chase Carey float ideas like Miami and London when what us fans really want is Turkey back on the calendar. It is all about money now.

Team bosses however, have stated that the teams cannot dictate where F1 decides to race, despite the concerns from human rights groups.

“When we sign up for a world championship, we don’t dictate where the calendar goes, but we sign up to race on every race,” explains Red Bull team principal Christian Horner. “We trust the commercial rights holder and the governing body to have done the necessary research and to make these decisions that are right for the interests of the sport. We are not a political organisation. Sport should never be seen to be political. Therefore we trust in them to make these decisions, the right decisions and wherever they choose to have races in signing up for that championship we will be attending and doing our best to perform as well as we can at these races.”

No Saudi driver has ever raced in F1. Some of you may remember the female Saudi driver Aseel Al-Hamad driving some demonstration laps in a Renault F1 car during the 2018 French Grand Prix, on the same day Saudi Arabia allowed women to obtain a driving licence.

Say what you will about the culture, their stance on human rights, there is nothing us fans can do to stop Formula One racing in Saudi Arabia. I only hope that the governing bodies can use their current commitments to the values of equality, diversity and exclusivity in race, gender and sexuality to help influence the fans that watch the sport.