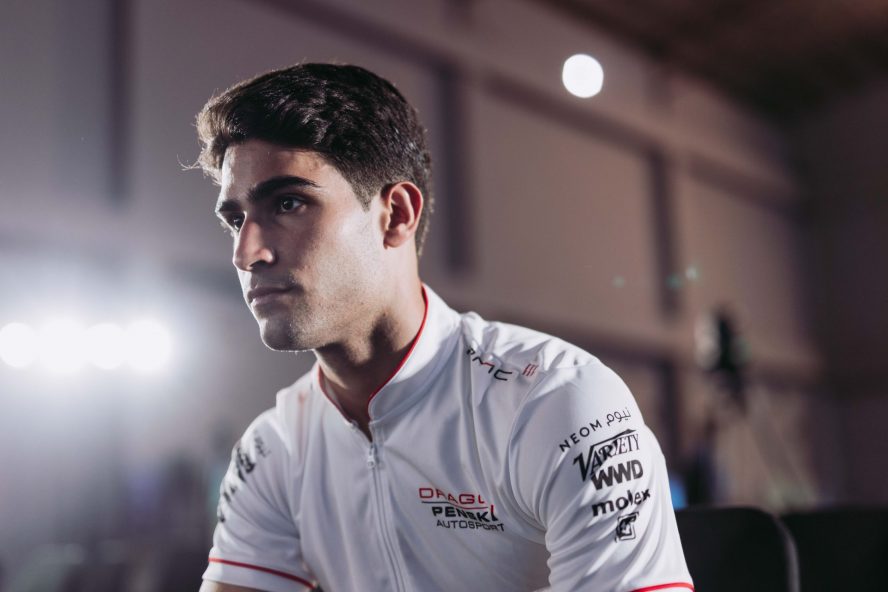 While attending the London E-Prix, we also got to speak with Penske driver Sergio Sette Camara

Sergio Sette Camara is one of the drivers that chose to pursue a professional racing career in Formula E following a stint in Formula Two.

The 24-year-old raced with MP Motorsport, Carlin and DAMS in the F2 series, finishing fourth in 2019. During his two years in F2, the Brazilian recorded three wins and managed 19 podium finishes, making him one of the greatest drivers in the series. He was also a test and development driver for McLaren in 2019, the year he switched over to Formula E.

Camara did not lose touch with the people in Formula One though. He acted as a reserve and development driver for Red Bull and AlphaTauri in 2020, but eventually left and is now focusing on pursuing great things in the electric championship series.

Having entered Formula E with Penske, Camara managed to score a total of 16 points. Penske are a smaller team compared to others in the series, but Camara insists that it is a team full of talented and passionate individuals. They were yet to score points in the 2022/23 season until Camara finished in ninth in Round 14 in the London E-Prix, achieving the first two points of the season. The day before in Round 13, he was close to finishing in fourth, but a sudden loss of power saw him go all the way back the grid and finish outside the points.

While in London, we asked Camara about what went wrong this season, and about his future.

The California-based team has been racing in Formula E since its inaugural 2014/15 season. Throughout their time in the electric series, they only recorded two wins. Jerome D’Ambrosio brought their first win in the 2015 Berlin E-Prix and a season later again he brought victory to the team in Mexico City.

But ever since, the team are finding it hard to achieve first once again, and Camara – who is about to complete his second season with Penske – gave us his thoughts on their situation.

He said, “It hasn’t been an easy season. Last year was slightly more competitive in the races. I think by this point last year, we had scored in two occasions, so we had scored in Saudi Arabia and we scored in London, so it’s never easy to take a step back.

“But I think, it’s just the car, it hasn’t developed as much as other teams. The team operations, the people that are in the team, are doing an amazing job, everyone, super committed. But we are much smaller than the other teams. We work, we try to improve the car, but the others just improve a little bit faster.”

Even though the Brazilian had a difficult two starting years in Formula E, he is very much looking forward to what this series is yet to show off. In 2023, Formula E will also be going to Brazil – his home country – and he will surely be looking to score points, possibly a win there.

Camara added, “About next year, I probably will be remaining in the championship, I cannot speak with which team and stuff like that, but I probably will be staying. And I’m very excited, cause there’s a race in Brazil, it’s a new car, there’s a lot going on and I really believe in the future of this series as well. I’m happy to be continuing.”

His time to score points in Season 8 finally came in London in Round 14. As he told us before scoring points, the team were yet to achieve something this season.

Camara had a great qualifying session in Round 13, getting into the dual stage. He raced it out in the quarter final against Oliver Askew but the Brazilian lost out on progressing any further. He still managed to start the race in fourth but unfortunately a fail in the system caused him any possibility of points.

Round 14 was a different story though. Running in twelfth for most of the race, Camara held tight to his position, kept putting pressure on the car and a retirement from Mitch Evans saw him go further up. Thanks to that he finished the race in ninth and earned the team the first points of the season.

We asked him about how the team approached the problems from Saturday, to perform better on Sunday.

Camara said, “Actually yesterday it was a mistake, a problem we had. We don’t have many people in the team, so it’s so easy for something to go by unnoticed and that is exactly what happened yesterday. We had some values that were wrong inside the car and that compromised our systems.

“So when this system, with the beeps we get in the ears, when it’s not working, we lose so much. So yesterday I was running P3, I started to lose performance, fell to P9, all of that was already because we didn’t have the systems working. So we were not doing our best race. And then ultimately we paid a price by not even finishing the race. So that was fixed for today.

“As soon as we finished the race yesterday we knew what it was, it was a mistake. And the team fixed it for today and I’m extremely glad that we managed to get in the points. Yesterday I did an extremely good qualifying, spent a lot of laps in the top three positions, today was Antonio’s turn to qualify well and have the same start to the race, and then I took some points home as well.

“So there were several good moments for the team and for me personally as well, it was incredible, so I’m very happy.”

Following a great weekend for Penske, we asked Sergio Sette Camara how they are now approaching the last two races in Seoul.

The Brazilian said, “It’s hard to tell because I haven’t been there and in Formula E, you can see through the season that the tracks matter a lot. Of course in every series, different teams take different tracks but in Formula E it’s huge, you know.

“In Mexico, Porsche absolutely dominated. And you see some other tracks, some other teams dominate. This one (London), it seems like it’s very good for our car, for our package. I’ve never been to Korea, no one has.

“It might be very good, very bad, average, I don’t know. But the likelihood of it being that good is extremely small because, you know, it’s the only track in the calendar that it’s like this, so the likelihood is not great. But we’ll keep doing our best and try to finish the season on a high.”

A great place for young drivers

Speaking about the future of Formula E, we discussed with Camara about the Formula Two drivers that are rumoured to make a move to the electric series. The Brazilian got a taste of what it is like to drive in F2 and be in the F1 teams’ system. It turns out, that Formula E was the best way to go forward for him and it is paying off.

The seats in Formula One are very limited. There are many talents in F2 such as Felipe Drugovich, Theo Pourchaire, Logan Sargeant and many more. Let’s not forget about Oscar Piastri, who is waiting on the sidelines at Alpine, hoping for an F1 seat for 2023.

Formula One already missed out on many great drivers, including Camara himself. But thanks to that Formula E gained a talent that will help the series move forward as it gains more popularity.

That is why Camara considers the series a great place for young drivers to work full-time and in a professional environment. He said, “Certainly, I mean Formula E has been growing in relevance in the past years. And if you’re a Formula Two driver, there’s very few openings in Formula One.

“So the ultimate goal for young drivers to become a professional racer, live from racing and Formula E is definitely a place to do that.”

He added, “I think Formula One is still the main dream for most of the drivers, but then you have Formula E, Indy Car, WEC (World Endurance Championship), but these I’d say are the main ones. Formula E is probably like their second choice or third choice, depending on each driver. But I think so, and we’ll see more in the future about drivers coming from F2.”