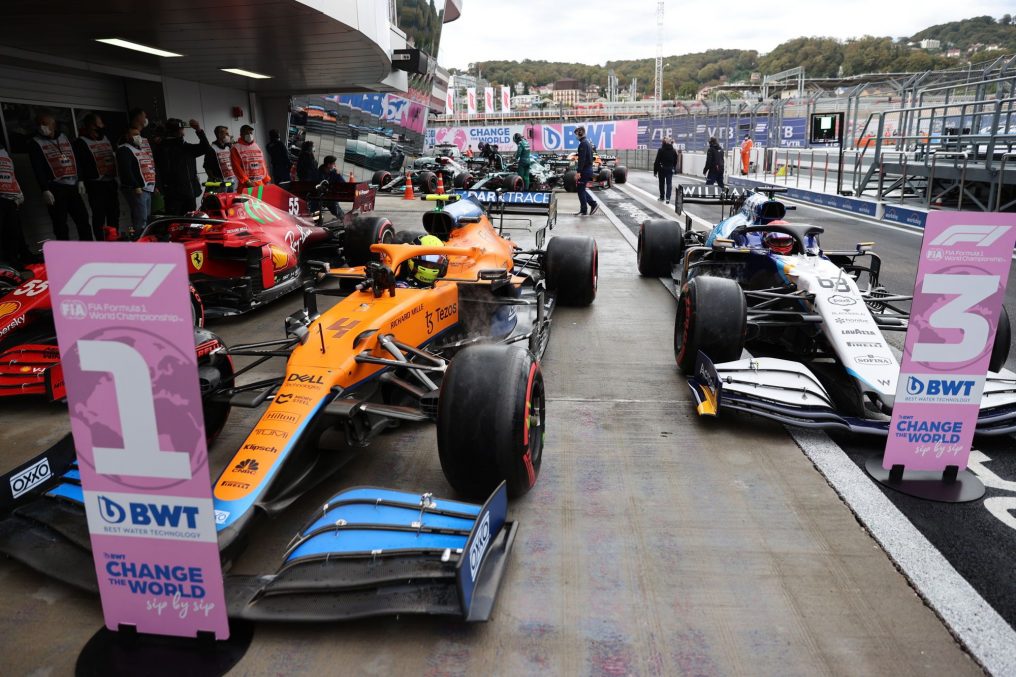 The Russian weekend has so far provided plenty of entertainment with a shocking qualifying result and starting positions more similar to a reverse grid due to the impact of the engine penalties.

The weather seems to concede drivers a dry race after the tricky conditions of qualifying. The expected temperature is 21°C with a cloudy sky and slight chances of rain. A dry race should help those teams who prepared the car for the dry, such as Scuderia Ferrari.

Regarding Maranello, the Tifosi’s eyes will be divided between the front and the back of the grid. In fact, Carlos Sainz qualified second and will start from his first-ever front-row finish. On the other side, Charles Leclerc, following the change of the power unit, will be forced to a comeback from 18th.

As well as the Monegasque, Championship Leader Max Verstappen will start from 20th on the grid and charge through the field in a race against time to conquer as many points as possible. Hence a  full send is expected from the Dutchman on the weather forecast for Sochi and entertainment will come with it.

As Verstappen will need to pass through the field quickly, Mercedes made a tactical choice in replacing Valtteri Bottas’ engine for the second time in a row to have the Finn start from 17th on the grid and try to slow down the Bull’s charge. Sochi has always been Bottas’ favorite track and he will certainly engage in his own comeback for the Constructors’ Championship.

At the front of the grid, a completely new front row is formed with Lando Norris starting from his maiden pole position and Carlos Sainz next to him. The duo will want to fight for at least a podium, as well as a possible race win. Behind them, an unexpected George Russell will try to hold up to the podium as best as he can while Lewis Hamilton from 4th will try to bring home 25 needed points for the Drivers’ Championship.

Considering Sochi is a rear-limited track, tyres’ management will be key for success. Pirelli has chosen the softest compound in the range (C3, C4, C5). According to Pirelli Head of F1 Mario Isola, the strategies will determine the race: “We’ve seen in the past that there’s been quite a lot of different strategic thinking, with all three compounds on the grid at the start of the race and varying tactics during the Grand Prix. Last year, the soft C5 performed better than expected and graining levels were reduced over all compounds between free practice and the race, due to high track evolution. In the past, some drivers have even tried a very early switch to the hardest compound and attempted to run all the way to the end, but last year this wasn’t quite possible as these days the asphalt has matured and is not as smooth as it was in the past. With the extra rubber on track from the very full schedule of support races this time, track evolution and grip should be further enhanced.”

As the usual frontrunners are divided throughout the grid, plenty of opportunities will be provided to the midfield for points and good positions. Monza race winner Daniel Ricciardo will look to help Lando Norris at the front while Sergio Perez will be expected to close the gap to Lewis Hamilton and help Red Bull’s position in the Constructors’ Championship. Sebastian Vettel and Pierre Gasly, who will start from 10th and 11th, looked rightfully upset after a disappointing Saturday’s qualifying and will need to use every opportunity granted to them.

Finally, the Russian Grand Prix will start at 13 (GMT +1) and is looking set to grant plenty of entertainment and chaos for, once again, a thrilling 2021 Championship.