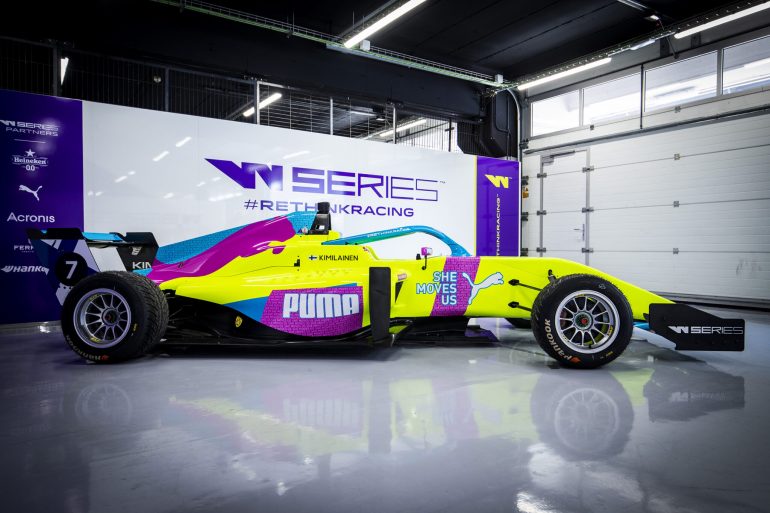 Puma extended its W Series partnership and signed a major driver for 2022.

As the third largest sports manufacturer, the company will continue to provide racewear for the all-female single-seater racing championship.

Also Puma announced that they’ve signed Emma Kimiläinen. Hailing from Helsinki, she won two races and achieved four consecutive podiums during her first two seasons in the W Series. The 32-year old took third in the championship last year. This year, Emma is eager to take on the challenge of eight support races alongside Formula 1 Grand Prix.

Kimiläinen claimed, “I am very proud to be racing for the Puma W Series Team this year. With their She Moves Us campaign, our brand and values fit together perfectly and, being a professional athlete at the top level and a mother, I hope to inspire girls and women chasing their dreams in sports. It’s amazing to be recognised by Puma and the fact that they believe in my talent even though I’m a 32-year-old mum speaks volumes. Together we can show the world that, irrespective of your age or gender, you can always pursue your dreams.”

Puma finished sixth in the team championship last year. They’re ready to take a top spot now.  Soon Emma’s Puma teammate will be announced too. The team made history when they supplied tailored high performance racewear for the female drivers for the first time. The racewear is flame retardant with triple-layer Nomex to ensure safety and comfort. Puma made an impressive statement with their women’s platform, She Moves Us which celebrates the top females moving sports and culture forward and inspiring other women globally.

W Series CEO, Catherine Bond Muir expressed, “I am delighted that Puma will continue to support W Series’ mission in 2022. Our brands are perfectly aligned – W Series aims to change the face of motorsport and increase opportunities in our industry for girls and women all around the world, while Puma is committed to celebrating females who inspire others, as shown by their support of W Series since our inaugural season. All of W Series’ drivers are inspirational and none more so than Emma Kimiläinen, who has competed against and beaten the world’s best drivers throughout her career and continues to do so whilst juggling her life as a businesswoman and a mother. Like us, Puma is determined to do all it can to help our drivers showcase their talent on motor racing’s greatest stage, and W Series’ drivers will once again be equipped with racewear tailored to their exact specifications, enabling them to feel comfortable in the car and perform at their best.”

It’s great to see W Series and Puma partnering. It’s helped the W Series to grow its awareness and audience.

Puma Head of Sports Marketing Motorsport & Operations, James Clark shared, “Passion for motorsport is in Puma’s DNA and we are excited to watch W Series grow worldwide. Through the She Moves Us campaign, we will provide comprehensive support and endeavour to drive women in motorsport forward, celebrating the success of the Puma W Series Team and the series as a whole.”

Puma Senior Brand Strategist for Women’s Performance, Maura Everett said, “We are excited to have Emma Kimiläinen join the Puma family as she is the embodiment of She Moves Us: excelling as an elite athlete in a male dominated sport while being a full-time mother. Emma’s winning attitude on and off track will inspire the next generation of women in motorsport.”

The W Series drivers and teams are enjoying their pre-season testing in Barcelona. Can’t wait to see the season start soon!