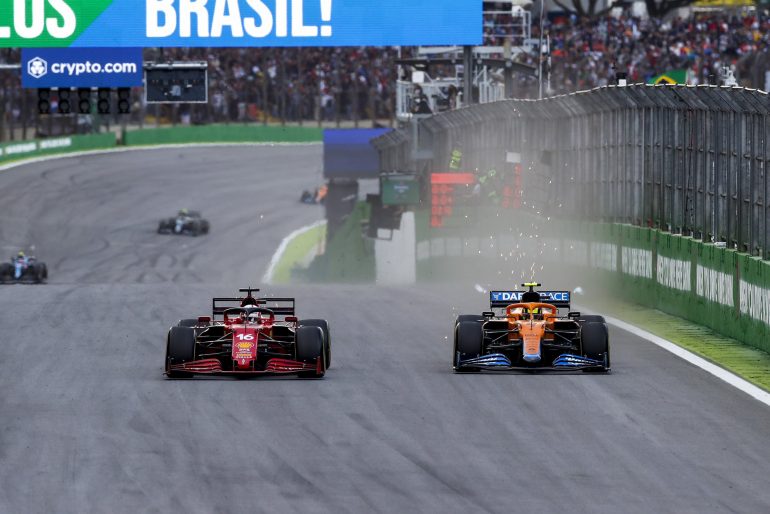 Norris vs Leclerc in Brazil

P5 in the Championship: the (other) closest battle of the season

The battle for P5 in the drivers’ championship this year, proved to be an intriguing fight that went right to the final race in Abu Dhabi.

Aside from the obvious, this proved to be the closest fight of the season, between three strong drivers.

McLaren’s Lando Norris fought with Ferrari’s Carlos Sainz and Charles Leclerc, with just 5.5 points separating the three drivers at the end of the season.

Whilst none of these drivers deserved to lose this fight, Sainz deserved to take the win out of the three through his consistency, alongside his four podiums throughout the season.

After the first three rounds of the season, Norris had an early edge. An early podium at Imola, and 4th and 5th placings saw him take a 9-point lead over Leclerc, who started the better of the two Ferraris.

Norris scored consistently well over the first half of the season, finishing below 5th just once in the first 10 rounds of the championship, in Spain.

Leclerc and Sainz were less consistent initially, with both registering two race weekends without points to this stage. Sainz scored a podium in Monaco, in 2nd ahead of Norris in 3rd. Leclerc came 2nd at Silverstone, but prior to the British GP, 4th was his best result.

At the half-way point of the season, then, it was Norris who led this three-way contest. He held a 20-point lead over Sainz, with 113 points to Sainz’s 83. Leclerc trailed his teammate by just 3 points, on 80.

It was in the second half of the season, though, where the Ferrari duo began to gain ground on the young British driver.

After not scoring in both Hungary and Belgium, Norris would only finish above 7th once in the rest of the season. He took second at Monza behind his teammate.

Although he did score points in every round, McLaren’s drop in form meant that he was contesting for the minor points, as opposed to those at the sharp end every week. Bad luck also cost Norris, like in Russia where he should have won, only to be undone by the decision to not pit when the rain started.

Ferrari, on the other hand, recorded regular points in the top 7, maintaining pressure on McLaren in the constructor’s championship, and on Norris in the drivers.

Sainz scored another podium in Russia, and Leclerc, despite not recording another top 3, did put in some strong drives, finishing in the top 5 in 6 of the final 10 rounds.

Heading into the final round at Yas Marina, it was Leclerc who held a slender lead over the other two drivers, with 158 points to Norris’ 154, and Sainz’s 149.5.

However, a brilliant race from Sainz saw him take 3rd, his fourth podium of the year, as Norris finished 7th and Leclerc 10th.

So, Sainz took 5th overall, leapfrogging both Norris and Leclerc, whilst Norris did enough to pip the Monegasque to 6th place, by a solitary point. Sainz, in the end, had a 4.5-point buffer to the young Briton, beating both his former and current teammate in the standings.

Whilst it was the McLaren driver who made the early running in this contest, the consistency of the Ferrari drivers ensured that they were able to claw back the 20-point deficit in the latter stages of the season.

All three drivers, along with Norris’ teammate Daniel Ricciardo will be hoping to resume this tussle next season, but they will be hoping to be competing with the Mercedes and Red Bull drivers too, as the regulations change.

Much will hinge on the two cars that their teams produce for them, but this season has shown each to be fantastic drivers, and, with the right equipment beneath them, consistent race winners.

Norris will hope for more consistency from himself and the car next year. Strong results and a good start to the season was good enough for Norris to defeat Leclerc, but not Sainz.

Leclerc will be disappointed to be defeated by his teammate, but one podium compared to four from Sainz, and four point-less weekends compared to just two from the Spaniard saw him slip behind.
Embed from Getty Images

Despite this, 2021 proved to be a strong season for all three drivers. For Norris, the only thing that was missing was that first, elusive race win, which he will hope will be coming next year.

Both Ferrari drivers will be disappointed to have not stood on the top-step of the podium either, but they will have the same hope as Norris for this to come next year.

If the new Ferrari and McLaren prove to be quick, we can expect to see these drivers fighting it out next year, too.