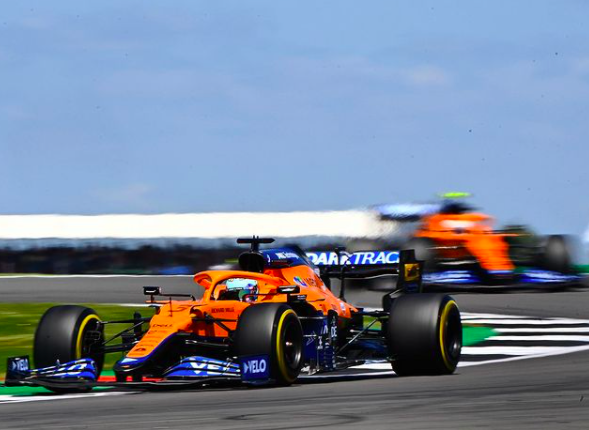 Lando Norris Is A Future British Champion On The Rise

Expect to see him on podium again soon.

Lando leaped to P3 sailing past Bottas which he held for multiple laps until a super slow six-second stop in the pit lane changed his course.

It was in lap 21 that a right-rear wheel gave the Mclaren team a bit of trouble. Lando lamented, “I don’t know what to say. It was still a very good race at the end of the day, I’m still P4 in my home race, and that’s a good result from sixth yesterday. Just here, I just wanted that little bit more. ”

The Brit should be incredibly proud. This was his best finish ever at Silverstone. He’s had the most consecutive points finished in history for a Mclaren driver in 15 races. What an accomplishment!

Norris noted, “Fourth is still a very good result for us, so it’s not like I’m really annoyed. ’m just annoyed that I didn’t get the opportunity to fight and put on a good show and at least have some battling and some racing. It’s still been a fun weekend.”

To date, Lando’s had three podiums and 2 fastest laps. With his multi-year extension, we can expect to see Norris racing with Mclaren into 2022 and beyond.

Andreas Steidl said in a Mclaren statement earlier this year, “He’s a formidable competitor on the track. Like him, we have strong ambitions for our future together and I’m pleased we’re continuing this journey into the next chapter for both Lando and the team.”

Despite everything this past weekend, Lando loved the fan vibes there to support him. Well done and onto the next one!