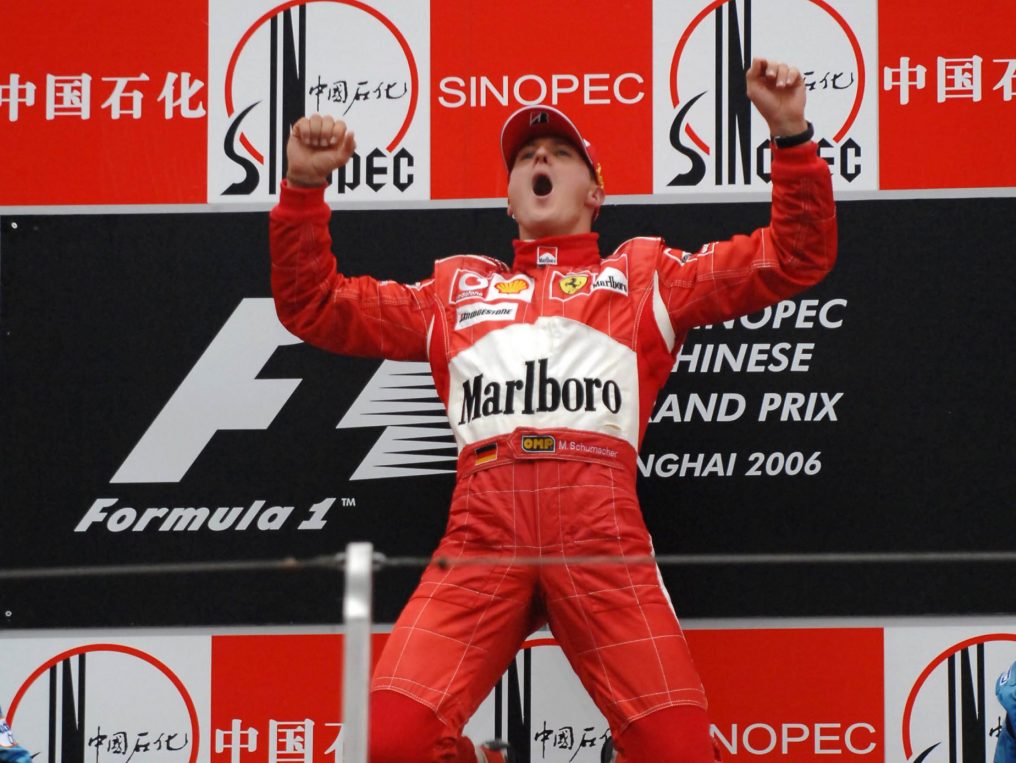 Michael Schumacher remains one of Formula 1’s legendary drivers and an idol to many of those currently on the F1 grid. On 1st October 2006, 15 years ago today, the ‘Red Baron’ secured his at the time record-breaking 91st win – and the last of his F1 career.

The 2006 Chinese Grand Prix was the 16th race in the 18-round 2006 season, with the title battle on a high between Renault’s Fernando Alonso and Ferrari’s Michael Schumacher for the Driver Championship. Alonso would end up winning the title this season, with a 13 point lead over Schumacher. But it wouldn’t be until October 2020, when Lewis Hamilton equaled the record of Formula One wins.

Here’s how it happened

The weekend hadn’t been kind to Schumacher. A wet qualifying session resulted in only P6 for Schumacher, who usually excelled in wet weather – but his Bridgestone tyres were not up to the task compared with the Michelins of most of his rivals. Heavy rain had graced the track before the start of the race, leaving the circuit in wet, but drying conditions. Starting from the midfield, Schumacher had to make his way past the likes of Fisichella, Button and Räikkönen, to catch championship rival Alonso in 1st position.

After an incredible start to the season for Alonso, the Spaniard went into the Chinese Grand Prix with only 2 points ahead of Schumacher. Everything looked to turn out in Alonsos favour in Shanghai, as he started from pole position and managed to clear the cars behind quickly. He was some 22.7sec clear of Schumacher after 11 laps.

However, things changed at the first pit stops. With the track drying up as the cars laid down rubber, Alonso decided to change for new intermediate tyes – but couldn’t make them work for him on track. His team-mate Giancarlo Fisichella in second caught up with Alonso, followed very closely by Schumacher now in third. Lapping around 4 seconds quicker than Alonso, they both passed the reigning World Champion by lap 31.

Alonso switched to slicks at the earliest possible opportunity, but a slow pit stop as a wheelnut fell out of the mechanic’s airgun, caused him to fall down the grid further. Schumacher still ran behind Fisichella, with no real chance of overtaking the Italian on track at this point. A series of further pitstops would change that though.

Schumacher pitted first; Fisichella a lap later. Whilst Fisichella still came out of the pits ahead of Schumacher, the Renault driver ran wide into Turn One as he drove onto a damp patch, leaving enough room for the Ferrari to pass. With only 15 laps to go, Alonso did not want to give up on the win and started to take off second over second each lap. Adding to the drama, a little more rain fell late on. But Schumacher, the 7-time world champion that he was, stayed cool and finished 3.1 seconds ahead of Alonso, with Fisichella in third.

The championship fight reached a new high, as both Schumacher and Alonso were tied on 116 points by the end of the Chinese Grand Prix. Alonso ended up snatching the 2006 World Title, with Schumacher retiring the next round in Japan and finishing 4th in the final race.

At the end of the 2006 season, Schumacher retired from the sport – 7 world titles, 91 wins and 14 years after his first race at the 1991 Belgian Grand Prix later.
Schumacher did make a return to the grid in 2010, however the comeback failed to live up to the expectations. In his three year stint with Mercedes, Schumacher would only claim one third-placed finish in the 2012 European Grand Prix. He left the sport – again and for good – at the end of 2012.