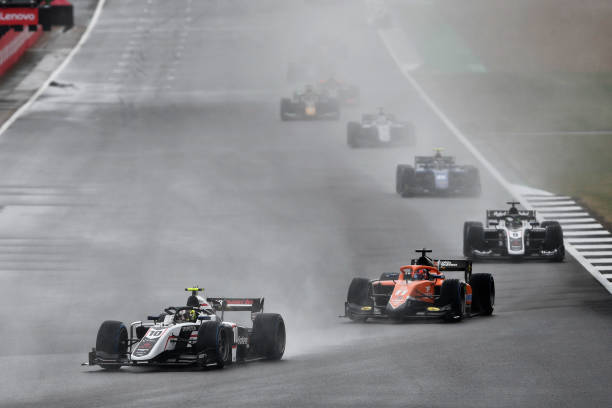 A look at the title fight that isn't over yet

MP Motorsport and ART Grand Prix are tied on points heading into the final weekend of the Formula 2 season.

Felipe Drugovich wrapped up the driver’s title back in Monza, but the teams’ championship has yet to be decided.

MP Motorsport currently leads on countback, but they’re on 281 points along with ART Grand Prix. Carlin Racing, 23 points behind, is also still in contention, although making up that many points would be a tough ask.

So with one of these two teams likely to take the title this weekend, let’s take a look at how they got here.

MP Motorsport has had an interesting season. On one hand, they’ve made a significant leap in performance and taken their first driver to the title. But the fact that they’re fighting for the teams’ championship at this point in the season is a little shocking when you consider the performance of both their drivers.

Drugovich has scored 241, or 86 percent of the team’s points for the year, a significant gap to his rookie teammate, Clement Novalak.

In fact, if you take away the points Novalak has scored completely, MP Motorsport would still be fourth in the teams’ championship, almost 20 points ahead of PREMA Racing.

The point isn’t that Novalak is a bad driver, he’s proven himself to be consistently good in other categories. Formula 2 doesn’t always work out for every driver right away, and it’s worth saying that some rookies struggle more than others and it isn’t necessarily a measure of their talent.

But it is worth noting that MP Motorsport has had to rely almost completely on Drugovich for team points. Fortunately, Drugovich has been more than successful, having taken the drivers’ title with three races left. He’s only retired from two races and only finished outside the points one time in 26 races. That kind of consistency is all but unheard of in Formula 2 and is a credit to the performance of Drugovich and the team.

While MP Motorsport has been incredibly consistent, ART hasn’t been so lucky. MP Motorsport’s worst round was in Austria this year, where they scored six points. ART, on the other hand, scored no points in their worst round of the season, which was in Jeddah.

ART’s advantage over MP Motorsport is that they have more evenly matched drivers. While Drugovich has scored the majority of his team’s points, the ART drivers are much closer to each other performance-wise.

Both rookies have struggled at times to get up to speed, but while Novalak has managed one podium, Vesti has taken five (one being a race win). Interestingly, both drivers scored their first points of the season in the Feature Race at Imola, where Novalak finished fourth and Vesti finished sixth.

Overall, ART was expecting to make a much stronger bid for the driver’s title, but Pourchaire has suffered more than his share of reliability issues, which has been a major factor in ART’s season.

It’s a testament to ART, who traditionally have prioritised one driver over another in their Formula 2 team, that they’ve made their way up to being tied for first in the teams’ championship.

Both of these teams, with very different seasons, have arrived at the final round with the same number of points. Whoever has a better weekend in Abu Dhabi will come out with their first FIA Formula 2 championship.

According to Felipe Drugovich, MP Motorsport won’t be approaching the weekend any differently. “I think we don’t need to change much from what I was doing before,” he told FormulaNerds. “I just need to keep it on the points, get a good quali.

“It’s going to be tricky on Friday just to get everything together, with the FP1 plan and everything that I’m going to be doing, so hopefully I’ll still be able to put on a good lap in quali. But then after that I think it’s just getting the points.

“It’s also a race weekend that will be quite relaxed on my side, so I can push a bit more in some areas that I maybe didn’t push the whole year for being safe I would say. So maybe we’re gonna see some lunges. But apart from that I think we just need to keep it quite similar.”

Formula 2 is one of the more unpredictable racing series, so anything can (and certainly will) happen this weekend in Abu Dhabi. While no one is fighting for the drivers’ title, there is still a lot to be settled amongst drivers and teams.

MP Motorsport and ART Grand Prix will both hope for a clean weekend in qualifying and a set of races. After all, every point could be the difference between winning or losing the championship.