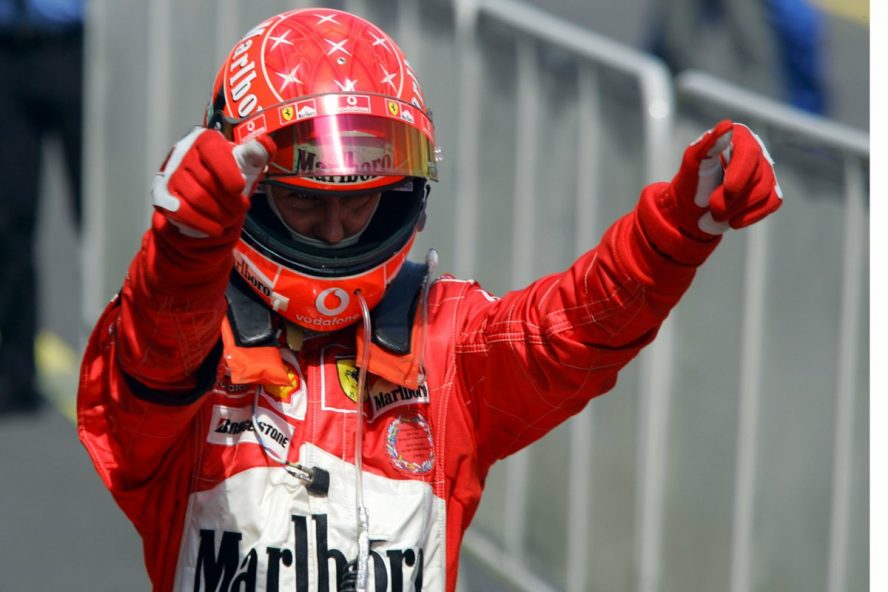 Michael Schumacher’s climb to reach the pinnacle of motorsport with Ferrari finally ended in 2000. Not content with just one championship for the Scuderia, the German steamrollered his way to immortal success.

Schumacher and Ferrari’s wait for the championship could be excruciating to watch at points. Whether bad luck or questionable driving from the German, the Scuderia wanted and needed to end the wait for its first Drivers title since 1979. The team winning the Constructors Championship in 1999 and coming to close to the driver’s title with Eddie Irvine showed the wait could be nearing its end.

Like all World Champions, controversy reared its ugly head on several occasions. All World Champions need a ruthless streak to succeed, with incidents in 1994 and 1997 proving Schumacher continued to follow this formula.  The German’s desire to win was only matched by that of Ferrari itself, with several incidents throughout the championship-winning years. Ferrari would prove to be a brutally effective political force as well as a racing one.

The combination of political and racing prowess made Ferrari untouchable. Rivals McLaren and Williams attempted radical ideas to catch Schumacher and Ferrari, but all ultimately failed. Such was Ferrari and Schumacher’s domination, two of the most dominant cars F1 has ever seen come from the title-winning years of 2000 to 2004.

When the grid lined up in 2000, the general opinion of the battle between McLaren and Ferrari remained the same. Two teams at the height of power would once again battle hard. But McLaren had now lost the Constructors Championship to the Scuderia. Schumacher now wanted the Driver’s title.

The season began as the previous one did, with a double McLaren retirement. Such was Schumacher’s pace, he won the first three races convincingly.

Three consecutive retirements mid-season allowed rival Mika Hakkinen to take back momentum, and Schumacher responded in the best possible way. In the final six races, Schumacher finished P2, followed by four consecutive victories. His F1-2000 had the measure of the McLaren MP4-15 after the summer break to give Ferrari and Italy its long awaited title. The drought had been broken, with Ferrari now having its first World Champion since 1979.

Such was his elation at winning the championship in Suzuka, the German later commented he hit the steering wheel so hard on the cool-down lap that Ferrari opted to retire it.

#OnThisDay in 2000, Michael @Schumacher ended @ScuderiaFerrari's 21-year wait for an @F1 title with victory in the #JapaneseGP 🇯🇵#WeLoveF1pic.twitter.com/BBIc19mcil

Schumacher’s F2001 used the following season is a car that can be forgotten sometimes. It won 9 races that season, all from Schumacher. Despite winning the opening two races of the season, the German had an on-form David Coulthard chasing him, Mika Hakkinen stuck in a mire of bad luck and poor form.

Coulthard won a wet Brazilian Grand Prix, conditions that should have seen Schumacher thrive. But this would be one of only two victories for Coulthard in 2001. Ferrari and Schumacher were simply, faster and far more reliable. The German won the title before the end of the year, finishing 58 points ahead of Coulthard in second. Matching and beating Ayrton Senna’s total wins at Monza proved to be emotional for the German, crying in the press conference.

However, it was not plain sailing for the team. Teammate Barrichello’s morale hit an all-time low when Team Principal Jean Todt ordered him to give up P2 to Schumacher. This would have massive repercussions a year later.

Any thoughts of 2002 being the year Schumacher and Ferrari were toppled proved to be woefully incorrect. The German finished every race in 2002 and stood on the podium at all rounds. Winning the title at the halfway mark of the season, the German broke the record for the most number of wins in a year, and now matched the great five-time World Champion Juan Manual Fangio for championships.

The season was not without controversy. Austria saw one of the most unpopular moments in F1 history, as once again teammate Barrichello was ordered to let Schumacher pass, this time for the win. He did so as the cars took the chequered flag.  The crowd and media booed, and Ferrari was fined, not for bringing the sport into disrepute, but for incorrect podium procedures. Schumacher as a gesture put Barrichello on the top step of the podium, leading to an awkward moment for the trophy presenters.  The team now deeply unpopular, continued its all-conquering season. Schumacher himself also took a popularity hit.

In 2003, new qualifying rules were bought in to mix up the grid. Schumacher’s challenger needed more prep time, so used the all-conquering F2002 for the first three races. The F2003 GA won on its debut, but the team had to fight for every win in 2003. Schumacher’s title defence went down to the wire, with McLaren’s Kimi Raikkonen the pretender to the German’s crown. Losing his front wing during the race, Schumacher’s P8 at Japan sealed the championship, with a storming drive of grit and determination to recover.

2004 would bring the last of the Schumacher titles to Maranello, in a truly dominant fashion. The F2004 like the F2002 proved to be one of the greatest F1 cars ever made. In the hands of Schumacher, it was unbeatable. The German won 13 out of 17 races, incredibly breaking his own record for the most wins in a year set in 2002 at 11.  Winning his fifth consecutive title, this proved to be another record.

Schumacher almost set another record in 2004, the most consecutive wins. Winning the first five rounds in dominant fashion, F1 arrived in Monaco, with the German wanting to make the record for the year a perfect six.  Then under the Safety Car,  the truly astounding incident occurred. The German slowed in the tunnel and was hit from behind by Juan Pablo Montoya’s Williams. Schumacher lost control of his Ferrari and hit the wall, destroying the front half of his F2004. Such was the World Champion’s rage, he smashed his helmet against the wall in the pits.

2004 was Schumacher at the height of his power. Ruthless on the circuit, at the third round at Imola, he forced Montoya wide at the Tosa hairpin, the Columbian incredulous when Schumacher said he did not see him. The ruthless streak of Schumacher went back many years, this was the latest in a long career.

The F2005 followed the philosophy of the previous challengers, it was an evolution of the car before it. However, Ferrari became complacent, it Schumacher no longer found himself at the front of the grid. The F2005 arrived ahead of schedule due to poor performances, but Schumacher retired. A blast of pace seen at Imola failed to turn into a regular race win challenge, and the German retired from three of the first five races.

Fortunes changed at Indianapolis at the farcical US Grand Prix. Schumacher benefited from political fallout resulting in all Michelin cars withdrawing at the race due to tyre blowouts in practice and qualifying. He won the race from teammate Barrichello, with only Jordans and Minardi completing a six-car grid. It would be the team’s only victory of the year.

The title Schumacher had worked so hard to win and maintain now belonged to Fernando Alonso of Renault. Schumacher would finish P3 in the driver standings in 2005, 50 points behind second-placed Kimi Raikkonen in his McLaren.

After writing off 2005, Schumacher and Ferrari targeted returning the championships to Maranello in 2006. Felipe Massa arrived as his new teammate. The dream team got both the engine and chassis right, with Schumacher battling the young Alonso across the season.

Both drivers won 7 races, leaving few scraps for others to pick up. Realising this would be his last shot at the title, Schumacher pushed hard in 2006. In his last controversial moment, the German “locked up” at Rascasse during Monaco qualifying, effectively parking his Ferrari.  Rival Alonso lost the chance to improve under the yellow flags. The stewards took a dim view, relegating him to the back of the grid.

Three successive wins midseason saw the pendulum swing back to Schumacher. Wins in Italy and China put German on the brink of an eighth World title. Ferrari announced his retirement after the German won at Monza, driving him to seal the championship. However, F1 can be crushingly cruel. At the penultimate race of the year in Japan, Schumacher suffered an engine failure. The mountain to climb at the final race in Brazil he fought hard through the grid once again due to incidents but was unable to seal the title.

He left the sport on a high, remaining with Ferrari as an advisor. Never far away from the race track, Schumacher continued to live and breathe Ferrari, the team that gave him so much.

Following Felipe Massa’s horrific injuries at the 2009 Hungarian Grand Prix, Schumacher attempted a comeback. Testing an F2008, he had to abort the attempt to replace his former teammate due to a neck injury.

However, the fire still burned within the German. He announced his return ahead of the 2010 season, now racing for Mercedes GP. Mercedes had just taken over the title-winning Brawn team and hoped for instant success. Schumacher was 41 when he returned and signed a three-year deal.

His comeback proved disappointing, accidents showing that age was catching up with the legendary German. His best result came at the 2012 European Grand Prix at Valencia finishing P3.

Schumacher bowed out of the sport for the last time after the final race of 2012. Whilst his results may not indicate success, the results of Mercedes since show the impact he had on the team.

His skiing accident in 2013 changed his life. He has not been seen in public since the accident at the request of his family as he recovers.  F1 will always remember Schumacher as he wanted to be remembered. One of the best drivers F1 has ever seen, and unbeatable in his prime.  Keep fighting Michael.