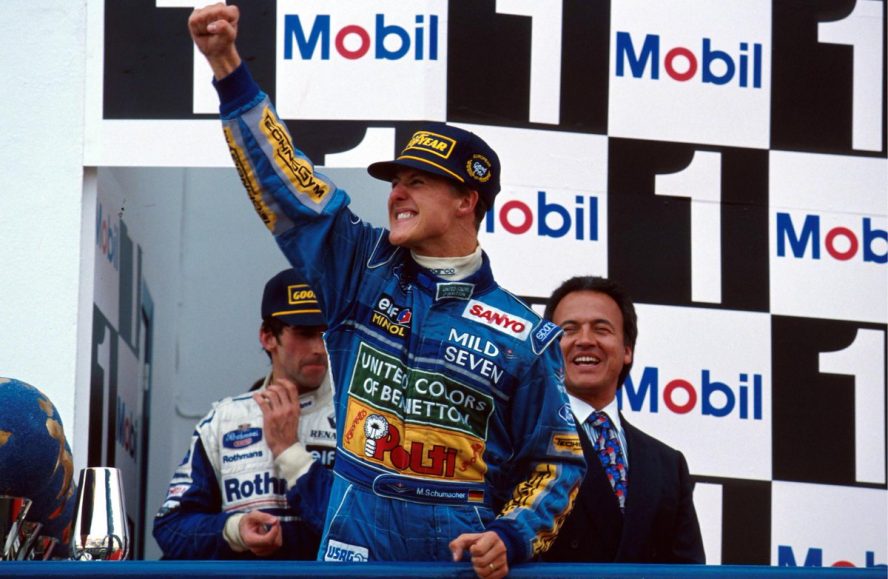 Michael Schumacher is one of F1’s legendary drivers. He turned 54 on the 3rd of January, with his legacy still resonating and impacting the sport today. His achievements are illustrious.

Schumacher’s success again raises the age-old question of the car’s influence on success. Whilst Ferrari’s dominance at the turn of the millennium cannot be denied, Schumacher’s ability to wring the neck out of sub-par machinery is the ability that places him in F1 lore.

He did not just benefit from the dominant steamroller of a team Ferrari became, he helped create it.  Three key individuals including Schumacher saw their futures and success become intrinsically linked after starting to work together. Ross Brawn and Jean Todt form the remaining part of this equation, forming an alliance that ruthlessly dominated F1 in the early 200s.

It is not an exaggeration to say Schumacher’s approach to racing transformed how drivers interact off-track. Schumacher, Brawn and Todt could still be seen at the circuit after 10 pm, analysing data or revising strategies very proof of you reap what you sew, the reasons for his and Ferrari’s success are clear for all to see. The German’s impact on the sport was immediate and quick. Prophetic for his dazzling career.

Schumacher’s debut came in the unlikeliest of circumstances. Jordan driver Bertrand Gachot found himself in a UK prison after assaulting a taxi driver.  With a seat now vacant in the iconic green Jordan 191, Team owner Eddie Jordan scouted for a replacement. Under contract to Mercedes at the time, the German manufacturer paid Eddie Jordan a handsome $150,000 to place Schumacher in the seat.

The German’s speed came to the forefront immediately. Jordan was still in its first season, and while not a slow team still had to find performance before it could become a regular points challenger. Schumacher only had practice and qualifying to get to the grips with the 191, yet still qualified P7. This turned heads in the paddock, with F1 watching with great interest as the grid lined up for the race. Sadly Schumacher’s race would end after only a few hundred yards, his Jordan 191 suffering clutch failure.

His brief performance attracted interest up and down the grid, as F1 realised a young superstar had just emerged. Eddie Jordan now held the key to Schumacher’s next move. Schumacher signed an agreement in principle with Jordan, but not a contract. Benetton Team Principal wanted Schumacher badly, promptly signing the German on a three-year deal. This infuriated Jordan, with the Irishman attempting to block the move, but losing as he did not have a valid contract.

Driver contract negotiations can take months to resolve, yet Schumacher’s next move had been decided and legally complete within two weeks. At the next round in Italy, Schumacher had changed his green race overalls of Jordan for the yellow of Benetton.

Under the management of Flavio Briatore, Schumacher spent the rest of 1991 with Benetton. This is the moment Schumacher was introduced to the genius of Technical Director Ross Brawn. They forged a strong relationship from the start, influencing results.  He scored for his first three consecutive races with the team with a P5 and two P6 finishes. Retiring from the final two rounds, foundations had been set for a strong 1992 season.

Nigel Mansell crushed all opposition in 1992 yet despite this, a changing of the guard felt almost inevitable. Behind Mansell, it was Benetton that provided the opposition in terms of the standings. Schumacher finished in third place in the standings, three points behind Ricciardo Patrese, and three ahead of reigning World Champion Ayrton Senna.  Youthful exuberance sometimes hindered Schumacher, including a collision with Senna in France that saw the Brazilian talk to the German about his tactics.

As the grid arrived in Belgium, Schumacher had four podiums to his name. The first victory was the next goal. He would take his legendary first win at Spa, one year on from making his debut at that very track. Schumacher’s rise was now complete. A second place at the final race in Australia sealed a strong year for the German.

1993 would see a similar performance, with one victory en route to P4 in the standings. While a resurgent Ayrton Senna prevented Bennetton from challenging Williams regularly, Schumacher still managed 9 podium finishes.

The Benetton B194 proved to be a rocket ship in the hands of Schumacher. Ayrton Senna had now left McLaren and arrived at Williams. The FW16 proved to be a tough car to set up for both Senna and teammate Damon Hill, while the B194’s pace became obvious in early testing. The B194 is a controversial car, with rumours of traction control and launch control being present never proven.

Schumacher lined up P2 in Brazil for a battle with Senna in what promised to be a closely fought season. Instead, Senna would retire from the first two races, spinning out of his home race, and then being collected by Mika Hakkinen’s McLaren in Aida. Schumacher would dominate both races, taking a commanding lead in the championship. Arriving at Imola, Senna needed to get his season back on track.

Tragically, Senna was killed during the race, a subdued Schumacher won. The German took his first pole at Monaco followed by victory for a perfect score of four out of four race wins. New Williams team leader Hill would strike back at Barcelona, then again at Silverstone. Schumacher would win the rest in between, making his tally 7 wins from 10 starts. However, at this point, the story changes. The German had been racing under appeal since Silverstone after overtaking Hill on the formation lap, then ignoring a black flag. After his win in Belgium, his underfloor plank was found to be excessively worn. He was disqualified, losing the win, and banned for two races for his Silverstone actions.

Hill clawed back into the standings with Schumacher away, the German winning at Jerez on his return. Losing out to Hill in Japan after a Titanic rain-soaked race, Schumacher and Hill’s battle went to the final race. At this point one of the most controversial and legendary moments of his legendary career took place. The German ran wide on lap 36, hitting the wall. He defended his line but hit Hill’s Williams, sending himself into the wall. Schumacher retired on the spot, Hill at the end of the lap. With his competitor out of action, Schumacher became World Champion. To this day questions remain about the German’s actions.

Michael Schumacher seals the first of his seven drivers' titles, but it wasn't without controversy#F1 pic.twitter.com/OV4S2k7Lem

1995 proved to be more of a romp than a battle. The B195 had swapped Ford V8 power for Renault V10 power, resulting in an instantly faster car. Schumacher won 8 races that year to Hill’s 3. The two collided twice, during the year, gifting the victory to the other Benetton of Johnny Herbert on both occasions.  Schumacher was beginning to think of the next chapter and signed for Ferrari in 1996. Jean Todt had courted the German, and with Ferrari slowly returning to competitiveness, Schumacher entered this new era seeing it as a project.

With the legendary team Schumacher, Brawn and Todt now united, work began to transform Ferrari into a winning force. The mode of operation was simple: Todt handled the political heat that can see Ferrari implode, shielding Ross Brawn from negative influences. Michael meanwhile would work with the team unhindered to extract all potential from the car. The results would prove to be devastating in just a few short years.

The 1996 F310 however was a car that only a mother could love. Bulky and unreliable, the car arrived late for testing. Schumacher worked miracles with his first Ferrari, notably winning at a rain-soaked Barcelona while championship leader Hill crashed out after just 11 laps.  Schumacher won two more races in 1996, brilliantly in Belgium again, then took a legendary victory atMonza in front of the adoring Tifosi. It was a strong foundation year as the team worked towards a championship bid.

In 1997, Ross Brawn arrived from Benetton as a Technical Director, and the forging of one of F1’s most successful relationships began. The F310B  was infinitely a better car than its predecessor, though prone to understeering. Schumacher still led a championship charge for the Scuderia. The final race of 1997 saw another controversial moment in the German’s career, driving into the side of Jacques Villeneuve’s Williams.

Villeneuve described the aftermath to formula1.com. Relieving the memory of driving past the stricken Ferrari, he said he saw Schumacher on the sidelines, sweating “he never sweated, but seeing that sweat is a vivid, vivid memory”. Schumacher beached his Ferrari and was subsequently disqualified by the FIA.

The 1998 F300 once again improved over its predecessor. Ferrari and Schumacher’s challengers changed from blue to silver, with Mika Hakkinen leading the charge for McLaren. An intense psychological battle dominated the year on and off the track. Both drivers were respectful towards the other, but the team rivalry became one of the most toxic and legendary in F1 history. When Schumacher and the second McLaren of David Coulthard collided at a soaked Spa, they had to be forced to sit together on a plane to cool off. Another last race title decider ensued at Suzuka, however, Schumacher stalled his engine on the grid. Carving his way through the field, he hit debris and suffered a tyre blowout. Hakkinen was champion, Ferrari once again agonisingly so close, yet so far.

1999 would prove to be a tough year for Schumacher. He finished P8 at the season opener in Australia after a steering wheel issue, while teammate Eddie Irvine won. A second place and two wins would follow. Then at the British Grand Prix, his Ferrari failed under braking for Stow corner, and hit the barrier hard, breaking his right leg. He would not return until the penultimate round, winning that race despite controversy over the legality of his Ferrari.