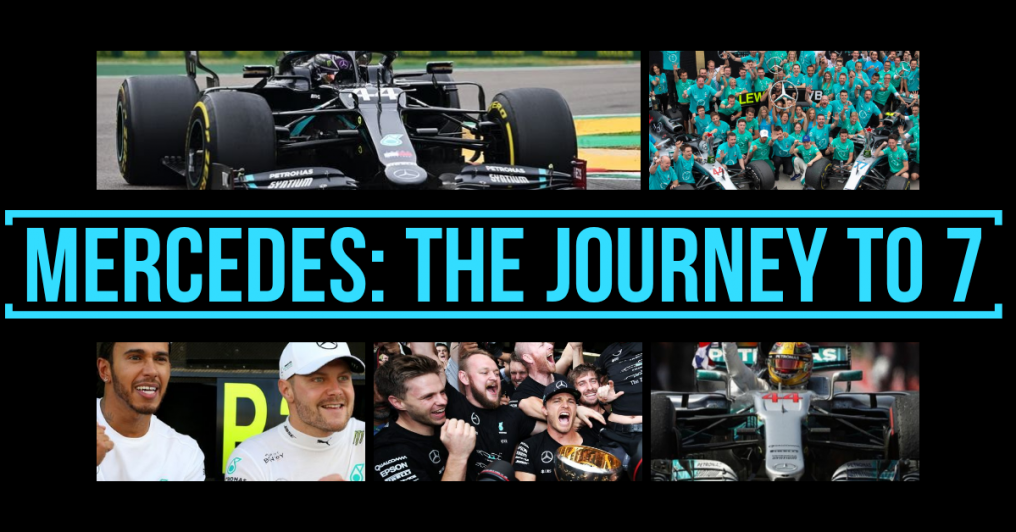 Mercedes: The Journey to Seven

It probably hasn’t quite sunk in yet at Mercedes. A one-two finish at Imola, their 58th in Formula One, saw the Brackley based squad claim their seventh consecutive world championship, breaking the record held by Ferrari with six. The race saw Lewis Hamilton take his 93rd career win with his team mate Valtteri Bottas finishing second, despite struggling with floor damage. With four races to go in the 2020 season, it is looking likely that we will see Hamilton take his seventh driver’s title, with the Brit 85 points clear at the top of the standings.

The team are the most dominant of the V6 turbo-hybrid era, with Imola marking their 100th win since 2014 as well as a 500th podium place for Mercedes Benz power. Looking at these incredible stats will only confirm to some who say Mercedes have had it easy and that their dominance is boring. Try saying that to someone that works for the team. They will only tell you that everyone involved in making these seven world titles happen has been well prepared and proactive. They will tell you that they could foresee the issues ahead that fell to their rivals and were able to stay one step ahead and never stopped.

They are a very well oiled machine.

The hybrid era of new engines that came into force in 2014 produced the same challenges for every team. With Mercedes being the factory team, supplying to Williams, Force India and possibly McLaren at the time, the prospect of being embarrassed at the first race in Australia was not an option. Starting development of the new power unit earlier in the 2013 season, gave Mercedes a head start against their opponents and encountered issues before them. They stopped working on all non-essential activities, purely focusing on the task at hand, with each member of the team putting in an extra 10 hours of work a week just to get the job done. The quality of work being produced, at the speed they produced it with, was inspiring.

While it was tough to master for most, Mercedes seemed to have got it right, winning 16 races in 2014, thus starting the journey to seven consecutive world titles. Their first title was won in style at the Russian Grand Prix in 2014, with a one-two finish from Lewis Hamilton and German team mate Nico Rosberg. It also marked Hamilton’s 31st career win, equalling fellow British driver Nigel Mansell’s record. They won the title with three races to go in the season and were on more points than Ferrari in 3rd, McLaren in 4th and Williams in 5th combined. It was the first time Mercedes had won the title, three years after their first team left the sport.

“Looking at this achievement, it’s incredible,” said Toto Wolff, Mercedes team boss speaking in 2014. “I have to pinch myself that we are now part of Mercedes-Benz history. Today, our team won the first ever Formula One constructors’ title for Mercedes-Benz and I feel proud and honoured to be part of this group.”

He also honoured Ross Brawn, who was the former team principal at Mercedes before stepping down at the end of the 2013 season, making way for Toto Wolff to lead the team through the hybrid era. “The foundations of this success were built by Ross and he played such an important role in the team to prepare this success,” said Wolff.

In 2015, they secured their second title once again at the Russian Grand Prix after Kimi Raikkonen was handed a post race penalty, with four races left to go in the season. They claimed 12 one-two finishes that year, leaving the other teams scratching their heads on how to challenge the Silver Arrows. Mercedes had produced the most efficient hybrid petrol engine that they had ever built with the best technology and world class aerodynamics. It was extremely difficult to beat. Lewis Hamilton won the drivers’ title in Austin that year after his team mate, Rosberg, made a late error. It was a chaotic race, with safety cars and virtual safety cars, plus crashes galore but it was one of Hamilton’s greatest wins.

They became the fifth team to win 3 consecutive world championships in 2016, a championship decided at Suzuka that year. They joined Ferrari, Red Bull, McLaren and Williams and were becoming a force to be reckoned with. Rosberg took the driver’s title that year, as Hamilton suffered reliability issues. It was a much tighter title fight between the two drivers, with Rosberg winning the title by 5 points over Hamilton.

The 2017 title was won at the United States Grand Prix, with Valtteri Bottas joining Mercedes from Williams to replace Rosberg who had announced his retirement after winning the driver’s title the previous year. Hamilton won the race, with Bottas coming in 5th, but it was enough for the team to celebrate a fourth consecutive title. Their 150 point gap to Ferrari was impressive, with Mercedes sealing 11 wins and 11 podium finishes. Ferrari suffered with reliability issues on the power unit, along with various errors by Sebastian Vettel which cost them valuable points to Mercedes.

“He is an exceptional driver and an unbelievable human and he has been an integral part if the team,” explained Wolff in 2018. “He is the one in the forefront and in the car. Many people have contributed to the success but clearly it wouldn’t have happened without him.”

Last year, they equalled Ferrari’s record of six consecutive world title wins at the Japanese Grand Prix, and also became the first team to win six consecutive driver titles. They spent £333 million to win the championship, which shows how much the teams will have to restructure going into the new cost cap rules coming in next year.

They clinched the title this year at Imola, after a bit of a whirlwind season cut short by the Coronavirus pandemic. But they have proved that they continue to be a force within the sport with teams struggling to challenge them each race weekend. The only real contenders this year have been Red Bull, but with Max Verstappen the only real threat to the dominance of the Silver Arrows, it has proved difficult.

They have faced a lot of criticism of late. Some fans have been blaming the team for the sport becoming boring. They are fed up with the dominance of Mercedes and Lewis Hamilton. I understand the frustration. Fans want to see racing with championships being decided on the last race of the season, and different drivers winning each race. But to those of you out there who are quick to put the blame on Mercedes, you cannot blame the team who have followed the rules and regulations that were set out to them. Every team want to win. Mercedes just did it better than anyone else and can you really blame them for that? They have been a powerhouse of dominance and brilliance, who have had a winning formula of teamwork and drivers since the beginning of the hybrid era. The teams at the factories in Brixworth and Brackley have put in the hours, the blood, sweat and tears for the team to succeed.

Blame the rules. Blame the regulations. Blame the rest of the grid for not being able to challenge them. However, I don’t think it is fair to blame Mercedes.