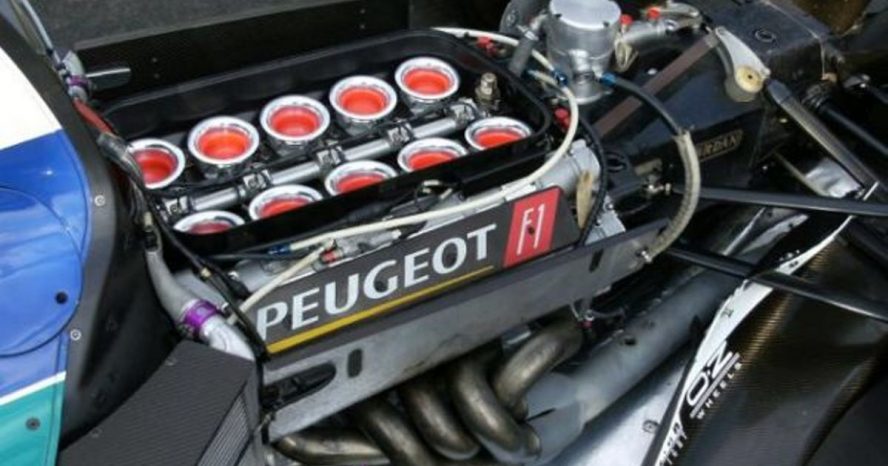 Today there are just four engine suppliers in F1. Wind back 25 years, and it was a very different story

In this series, we will look at the engine suppliers that disappeared from the F1 grid during the 1990s for various reasons. A manufacturer could withdraw due to a lack of return on investment, or a change in company priorities.

Today’s power units are deeply complex, highly specialised feats of engineering. Developing one costs tens of millions of dollars and substantial financial investment from the manufacturer. Because of this, only Ferrari, Mercedes and Renault developed power units for the introduction of hybrids in 2014.  Honda then joined the grid a year later, leaving in 2021.  Now badged Red Bull Powertrains (RBPT) these are still effectively Honda engines.

Wind back to the 1990s, and it was a very different picture. V10s and V8 engines while expensive, were relatively easy to develop compared to today’s standards. If a team today switches power units, the deal is announced up to two years in advance, and the manufacturer works with the team to integrate the design into their first collaboration.  In the 1990s, a change of engine could be announced in the latter half of a season, for introduction in the following season. That was sometimes a timeline of six months. Like our Worst Teams series, an engine could dictate your future on the grid.

Renault, Mercedes, Honda and Ferrari provided the best engines by a long way in the 1990s, with McLaren and Williams taking all titles between 1990 and 1997, Honda withdrawing at the end of 1992.  Mercedes and Ferrari then took over the mantle of best engine after Renault withdrew at the end of 1997. Other engine manufacturers attempted to build a V10 or V8, with varying degrees of success. This list looks at the now lost names of the sport, both good and bad.

Peugeot is very much an example of what could have been if several key events had not happened. The French manufacturer had at one point, one of the fastest engines on the grid. Yet Peugeot is remembered in F1 as a failure, with no wins or championships. Fading into obscurity at the start of the millennium, Peugeot had such promise but never delivered.

Peugeot’s story could have been very different if Jean Todt, the mastermind of Ferrari’s dominance between 1999 and 2004 had not been tempted away from the manufacturer. Todt was Director of Peugeot (Talbot) Sport from 1982 to 1993. Overseeing the transformation of Peugeot in Motorsport, he brought success to the French manufacturer before being recruited by Ferrari President Luca di Montezemolo for 1994. Todt’s transformation of Ferrari from 1994 to 1996 is well known, and by the start of the 2000s, the Scuderia was an untouchable force.

We will never know what might have been if Todt stayed at Peugeot, and guided them through F1. However, it is safe to say that more silverware may have come their way.

In 1992 Honda bowed out of F1 after a highly successful spell in the sport, resulting in 69 race wins, 5 Constructor’s championships and 5 Driver’s Championships. The 1988 MP4/4 was McLaren and Honda’s masterpiece, with 15 out of 16 races won. McLaren secured a Ford deal for 1993, with Senna famously on a race-by-race contract. Team Principal Ron Dennis looked at a variety of options before settling on a works Peugeot deal for 1994. His intention was for Peugeot and Renault to be locked in a development war, battling for supremacy.

Battles off track between McLaren and Peugeot began almost immediately. Peugeot pushed for a French driver to drive alongside new signing Mika Hakkinen. With Alain Prost retired but under contract at Williams, unable (and unwilling) to race against new signing Ayrton Senna,  Phillipe Alliot was the intended target. Dennis was not fond of this idea, and eventually won out to have his preference, Martin Brundle take the seat. Alliot while not ruled out, became Test and Reserve driver.  Hakkinen would test the new MP4/9 pre-season, the contractual dramas not resolved until the eve of the season.

The Peugeot A4 V10 was taken straight from the winning 905 Le Mans car, so expectations were high. The first race of the season was a reality check for both McLaren and Peugeot. Qualifying P8 and P18, the A4 was nowhere near the pace of the leading Renault V10 and Ford V8. Reliability was an Achilles heel for the A4 V10, with both McLarens retiring in the first two rounds. In the first nine rounds, Hakkinen only finished twice, albeit both times on the podium. Not all retirements were due to engine failures, as some were driver errors.

The unfortunate Martin Brundle also only finished three times in the first nine races, his engine spectacularly failing at the British Grand Prix as the lights turned to green. Reserve driver Phillipe Alliot fared no better, retiring at his only outing of the season in Hungary after Hakkinen was banned for one race for causing a massive start line crash at the previous race in Germany.

While pace began to improve from round ten onwards, Ron Dennis at this point had serious doubts about Peugeot’s commitment to its F1 project.  The once illustrious McLaren consigned to the mid-pack, while any yellow flags for a stopped car could well be another expired Peugeot-powered engine. A run of three consecutive podiums for Hakkinen towards the end of the season was not enough to salvage the relationship, and Ron Dennis opted to sign a long-term agreement with Mercedes for 1995.

Eddie Jordan immediately picked up the Peugeot works engine for 1995.  Jordan at this point was only in its fourth season and finished an impressive P5 in the Constructor’s championship in 1994. This was thanks to a much improved Hart engine. Despite the dramatic failures seen at McLaren, Eddie Jordan saw a unique opportunity to have a large engine manufacturer as his supplier. This was in contrast to Hart, which was by comparison a very small operation.  The agreement also benefitted Peugeot, who were able to improve their reliability away from the limelight. Working with Jordan presented less pressure, very similar to Honda’s move in 2018 to AlphaTauri, ironically, also from McLaren.

1995 was another disappointment for Peugeot, as while reliability slowly improved, crashes and engine failures saw just 21 points at the end of the year. Jordan would finish P6 in the Constructors that year. The highlight of the season came at the Canadian Grand Prix. Rubens Barrichello and Eddie Irvine would finish second and third in a race of high attrition.  Despite the improvements, reliability was still an issue for Peugeot.  1995 saw four double retirements and only four races in which both cars finished. Unfazed, Eddie Jordan continued into 1996 with Peugeot.

1996 saw all new technical regulations for F1, the cars now very different, and their overall downforce reduced. This was done in the wake of the tragic death of Ayrton Senna two years previously. Hope was high for Jordan and Peugeot in 1996 after a challenging first season together. Martin Brundle had joined the team to be reunited with Peugeot after their unsuccessful year at McLaren in 1994. Brundle also knew Jordan well, having raced for him in lower formulas when he started his racing career. The young but quick Rubens Barrichello continued for the team.

Giancarlo Fisichella would equal Peugeot’s best ever result at the 1997 Belgian GP, guiding his Jordan to 2nd place. Peugeot would score five 2nd places across their 7 seasons in F1, but they would never taste victory. #F1 #F11997 pic.twitter.com/4fLlfEMoCX

The first race saw a double retirement, though not caused by Peugeot. Martin Brundle suffered a terrifying crash into turn three, flipping his Jordan over at high speed. Incredibly, Brundle walked away unhurt. Improved reliability and consistency saw Jordan improve to P5 in the Constructor’s championship. 1996 yielded no podiums, the 196 described as “a dog” by Martin Brundle.

1997 was the year Peugeot could and should have become a front-running force. Towards the end of the season, the A14 V10 was arguably one of the fastest engines on the grid. But consistency and reliability still eluded Jordan and Peugeot.  New drivers Giancarlo Fisichella and Ralf Schumacher were let down by engine failures and driver error. Finishing P5 again, multiple podiums and the elusive first win for Eddie Jordan slipped away. Despite securing three podiums and 11 points scoring finishes, Eddie Jordan was on the search for a new engine partner for 1998. The Irishman signed with Mugen Honda.

Political factors pushed Peugeot into a relationship with Alain Prost’s team for 1998. Prost had bought the Liger outfit on the eve of the 1997 season, and the team was impressing. Although the year saw no wins, Oliver Panis stood on the podium twice in the Mugen Honda-powered car. Prost finished P6 in the Constructors Championship, one place behind Jordan. The aim of the tie-up between Post and Peugeot in 1998 was for the all-French affair between car and manufacturer to turn the team into a powerhouse.

Instead, the alliance proved to be a total disaster. Reliability was still worse than ever, but the Prost AP01 was also hopelessly slow. Crashes from Jarno Trulli did not help the cause, and the team finished P9 in the Constructors with just one point. The images of Prost Peugeot mixing with the likes of McLaren and Ferrari had long faded by the end of the season, as the cars were lapped every race.

1999 saw an improvement, with the team finishing P7. John Barnard arrived as Technical Director, and the car looked quick in some qualifying sessions, only for the pace to disappear.  Jarno Trulli’s P2 at the chaotic Luxemburg Grand Prix at the Nurburgring and Panis’s P6 at the German Grand Prix were the only times a Prost finished in the points in 1999.

2000 was Peugeot and Prost’s nadir season. The team finished last in the Constructor’s Championship, failing to score. Despite firing the car’s designer early in the season, there was no way back for Prost and Peugeot. The manufacturer withdrew at the end of the year, and the IP was transferred to Asiatech, who ran the engines for two seasons for backmarker teams.

Peugeot’s F1 Director, Frédéric Saint-Geours was clear that the manufacturer was likely never to return to the sport, stating: “I want one thing to be made totally clear. We are pulling out of Formula One for good. In life one must never say never, but if you want my opinion, it is that Peugeot will never again race in F1. We simply do not believe that the massive investments in Formula One are justified by the returns.”

Where did it all go wrong for Peugeot? Simply put, the company never adapted its attitude. F1 is a brutal sport that eats money, but throwing money at an issue will not resolve it. F1 requires significant investment in innovation. Peugeot did not do this. It left F1 with the unenviable tally of 115 race starts, and no wins.