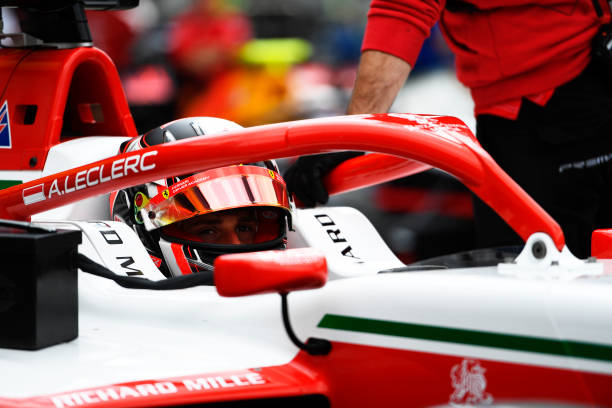 SPIELBERG, AUSTRIA - JULY 09: Arthur Leclerc of Monaco and Prema Racing (4) prepares to drive during the Round 5:Spielberg Sprint race of the Formula 3 Championship at Red Bull Ring on July 09, 2022 in Spielberg, Austria. (Photo by Rudy Carezzevoli - Formula 1/Formula Motorsport Limited via Getty Images)

Ferrari-backed Arthur Leclerc feels his campaign is heading in the right direction after a rocky rookie season.

Leclerc currently sits third in the driver standings on 91 points after claiming his first win of the season at Silverstone.

Reflecting to Formula 3 on his season so far, Leclerc commented “2022 started well, in terms of days of pace and speed. I think we are really happy because we have the potential to win races and take some pole positions.” He went on to acknowledge that he has, however, “struggled a little bit with qualifying.”

The Ferrari Academy Driver has had a strong start to the season consistently finishing in the points.

His first podium of the season came in the first round in Bahrain, where he finished P2 in the Feature Race. He also secured P4 in the Sprint Race.

Moving into Imola, Leclerc was unable to score in the Sprint Race. This, however, didn’t phase the Monegasque driver as he fought his way through the field to finish P4 in the Feature Race after starting P21.

Leclerc started the Barcelona race weekend on the front foot crossing the line P4 in Saturday’s Sprint Race. His weekend was, however, quickly turned around after finishing the Feature Race in P11. This was short-lived after he received two five-second penalties for erratic driving and causing a collision, demoting him to P16.

Looking to Silverstone, the PREMA driver was searching for a comeback. After Qualifying P2 Leclerc made up four places to finish P8 in Saturday’s Sprint Race. His run didn’t end there as he passed polesitter Zak O’Sullivan to take his first race win of the season. This sees Silverstone become his most successful weekend so far this season.

Determined to continue his streak Leclerc made the podium once again, finishing P3 in Austria’s Sprint Race. He also finished in the Feature Race in P4, taking home another strong haul of points.

Speaking on his season so far in Formula 3 Leclerc commented:

“I’m really happy about the step, it’s going in the right direction.”

He added that the team “have the base and I know that we have that so we can do good. I’m pretty happy about putting everything together, not doing mistakes and fighting for pole.”

Leclerc chose to stay with PREMA for his second season in Formula 3 and he believes that this has played a part in his current success. He went on to say “the team helps a lot. You have the same people around you and they help you in the right way.”

He added, “I feel really good within the team as part of the PREMA academy, so not having to change environments and not change people around me is a big help as well. We are not starting from the bottom. We’ve already started the work last year and I’m really happy to continue it this year.”

It’s no secret that the Ferrari-backed driver is in strong contention to claim the championship following his consistency.

Looking to the remainder of the season, Leclerc commented on his plans going forward, saying “we already have quite a lot of pace, I’m quite confident right now and then it’s just about using the full potential and putting everything together and then the results will come. Looking at the last year and from the beginning of this season, I’m pushing my targets and we’ll definitely have some more podiums.”

He concluded by commenting on his championship hopes:

“The target for me is to win, it’s always the target. The focus is on the job and to improve the

details as a driver. I really put my focus on it and I think as a team we can challenge for the Championship.”

Formula 3 returns to Hungary for Round Six (29th-31st July) where Leclerc will be looking to continue on his point-scoring streak.