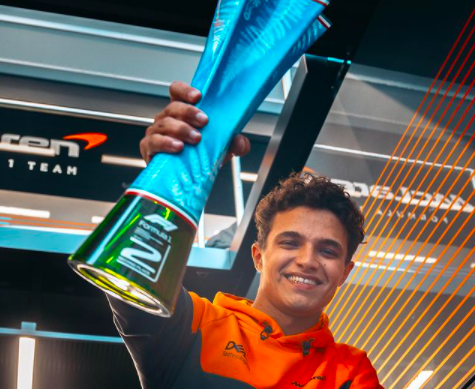 The Brit completed a brilliant finish in Monza.

Lando’s continuous rise in racing shined through at the Italian Grand Prix.

It was a bittersweet experience for Norris who accomplished his best-ever result P2 in Formula 1.

Lando expressed, “It’s incredible. The main thing it means for me is our result as a team. Whether I’m second, third, or first, I think the best thing is just having that one-two for the team, securing the maximum points and it’s just such a cool feeling to be part of this. I’m a bit lost for words in a way but I’m happy for myself to be here again, and for us to have executed the race the way we did with the overtakes and the strategy, and the defending. And happy for Daniel and the whole team because it’s a pretty awesome achievement for all of us.” He made a memorable moment for McLaren in Monza.

Norris passed Hamilton during the opening lap. From there, he wanted more. Via the team radio, he asked if he could race against this teammate or if hold his position. Perhaps the Hamilton and Verstappen crash changed his mind.

Lando admitted, “I got a bit closer on one lap and I don’t know why but I had a few flashes of seeing the incident between Max and Lewis, because I saw it quite well in my mirrors. So when I thought, maybe I’ll try, that kind of was flashing up in my head, and I thought, maybe this isn’t the wisest decision. I would have loved to go for the win but our first and second, I think I’m just as happy with. The feeling I get for the team is priority over my own feeling in a way.”

Fans are back as Silverstone prepares for thrilling weekend

Team Principal Andreas Seidl noted how proud he was of the team. Also, that there’s loads of work to go but they’re heading in the right direction. McLaren CEO, Zak Brown said, “As we know, Lando had a sensational season so far. We needed that also, the battle we’re in with Ferrari, on our journey to get back to the front in Formula 1.”

Lando admitted that he was happy to stay where he was placing the team first. Debuting with McLaren in 2019, Norris has shown real maturity. He’s entered 52 Grands Prix, achieved 278 points and five podiums. His highest grid position and highest race finish are P2. The Brit is currently in fourth with 132 points in the driver standings. There are plenty of opportunities to continue his rise.

McLaren pulled off an impressive strategy comprised of drag and downforce to master the Monza track. This is McLaren’s first win since 2012 in Brazil. It’s the team’s first one-two win since 2010 in Canada. With this magnificent Monza result, McLaren rose above rivals, Ferrari to take third with 215 points in the constructor standings.