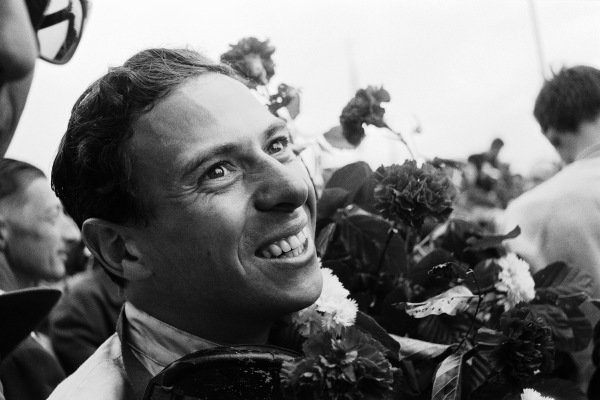 There is one particular person who has inspired me the most in my motorsport life. He has also inspired millions of others, including Ayrton Senna. His name is Jim Clark.

(I must confess from the outset, that my in addition to being my racing hero, I share an unusual connection to Clark, whose nanny was my great-grandmother.)

Born in 1936 in Fife, Clark grew up on his father’s farm in Duns. He first caught the attention of Ian Scott-Watson in 1958, who became his manager shortly after.

In the same year, he met the man who would become not only his boss, but also his very good friend: the legendary Colin Chapman – Founder and Team Principal of Lotus.

Chapman saw how talented Clark was after he finished second in a heat at Brands Hatch. To show this wasn’t a one-off, he finished second in his class at the 24 Hours of Le Mans. Chapman let him drive in Formula Junior against the likes of John Surtees, with Clark winning the championship. This earned him a spot on the Lotus roster for 1960.

He debuted in F1 that year and in his first two seasons, took three podiums. He also won his first three F1 races, albeit non-championship races. However, the field in these races was still decent: Stirling Moss, Jack Brabham and Lorenzo Bandini among the drivers he competed against.

The first race in which Clark truly showed his talent to the world was in Belgium in 1962. Clark qualified only P12 on the grid, but by the end of lap one he was up to fourth.

By lap nine, Clark was leading. From there, he had an incredible drive, winning by 44 seconds from Graham Hill.

Clark went onto win another two races that year but due to poor reliability, he ultimately finished twelve points behind Graham Hill’s BRM in the championship.

1963 was the year everything changed for the Scot. Chapman had designed the Lotus 25 the previous season, but it took time to perfect the car. Clark dominated, winning the championship by 25 points over Richie Ginther’s BRM – a sizeable gap considering the points system of the day.

In 1964, Clark’s three victories were more than anyone else, but with consistently unreliable leading to four retirements in championship races, he fell short of back-to-back titles.

Indeed, he lost the championship on the final lap of the season, in Mexico. Leading from Dan Gurney and Surtees, meaning he would claim the title on countback against Hill, his engine seized, leaving him to be classified P5 in the race. This handed the championship to Surtees, who himself beat Hill on countback.

The following year, Clark dominated almost everything he did, winning the Indy 500, the F1 Drivers’ Championship, British F2, the Tasman Series and French F2. Clark won every race he finished.

1966 was a struggle in a slow, unreliable car. Despite this, Clark still won a race and took another podium.

The following season started slowly, but soon came the exciting Cosworth DFV engine. This paired with the legendary Lotus 49 chassis, giving the team the fastest car on the grid.

Ultimately, 1967 was a good year. Winning four races – despite five retirements and bad luck in both Belgium and Italy – Clark finished third in the championship. He finished behind the dominant Brabham duo of Denny Hulme and Jack Brabham.

Then, tragically, Clark’s life came to an end. After claiming his 25th win in F1, at the season-opening South African Grand Prix on New Year’s Day, 1968, he decided to compete in an F2 race at Hockenheim in early April, just over a month before the second F1 race of the season.

7th April 1968 is a date which will forever live on in the minds of racing fans, as that day, one of the finest racing drivers to ever grace motorsport lost his life. Clark crashed on lap five of the first heat and was catapulted into trees. He passed away aged 32.

The motorsport world went into mourning, with Colin Chapman saying he lost “his best friend.” Many believed that Clark was so good, he couldn’t have crashed. Speculating that it was caused by a puncture. There has never been a definitive answer.

But why was Clark so good? Why is he ranked on the top of so many “Top 10 F1 Drivers” lists?

It’s because of so many factors, whether that be his driving style, his flexibility when it came to which cars to drive or his wet-weather ability.

Germany 1962 was one of his first great races. Forgetting to turn on the fuel pump at the start of the race, he still finished fourth despite being P26 at the end of turn 1. Notably, he managed to overtake 15 cars on the first lap alone, moving up to P10.

Clark’s 1963 Spa victory is one of his finest, winning by almost five minutes from anyone else, with only Bruce McLaren also on the lead lap in his Cooper. Clark led every lap despite starting P8, dominating in wet, foggy conditions. Even more incredibly, Clark had a seized gearbox, meaning he drove one handed for several laps of the race.

And finally, the greatest drive of them all, the 1967 Italian Grand Prix. Clark had led nine of the opening twelve laps. But unfortunately, he picked up a puncture on lap 13, resulting in him falling a lap down.

He then made staggering progress, gaining back two laps on race leader and teammate Graham Hill until Hill retired. Clark was now up to third behind Brabham and Surtees.

He passed Surtees on lap 60 before passing Brabham the following lap. Clark looked on course for his 23rd win until, on the final lap, he ran out of fuel. He cruised home in third, with Surtees winning from Brabham.

Though long gone, Clark will never be forgotten. The man from Fife has inspired me – as well as many, many others – for a long time and to celebrate his legacy, I went to his grave earlier this year, as well as having visited the Jim Clark Museum in Duns.