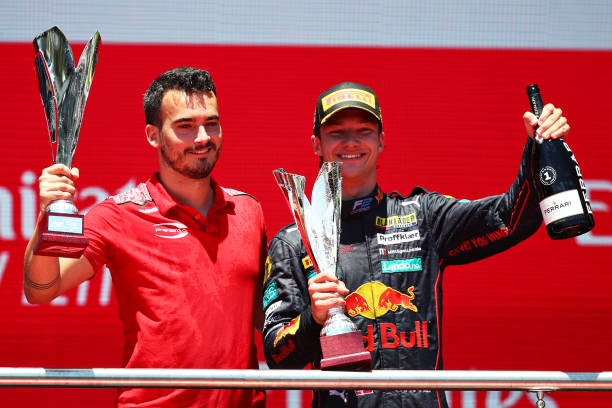 BAKU, AZERBAIJAN - JUNE 12: Race winner Dennis Hauger of Norway and Prema Racing (1) celebrates on the podium during the Round 6:Baku feature race of the Formula 2 Championship at Baku City Circuit on June 12, 2022 in Baku, Azerbaijan. (Photo by Joe Portlock - Formula 1/Formula Motorsport Limited via Getty Images)

Are Prema losing their title as the best team in the feeder series?

Since the inception of FIA Formula 2 and Formula 3, Prema Racing has been regarded as the most dominant team in the feeder series. They boast three out of five drivers’ titles in Formula 2, and three out of three in Formula 3.

These two categories, both usually dominated by one of the Prema drivers, are about halfway through the 2022 season. But in Formula 2, they’re only fourth in the team standings. And while they currently hold the lead of the Formula 3 Team Championship, their highest placed driver is only third in the standings.

Prema’s history of dominance in the Formula 1 feeder series predates the current FIA Formula 2 and Formula 3 series. The team won their first (and only season) in the GP2 category in 2016, with Pierre Gasly and Antonio Giovinazzi finishing first and second overall. The following season GP2 became Formula 2.

Before FIA Formula 3, the series was called FIA European Formula 3 Championship. Prema competed in that category since its inception in 2012. They’ve won the Teams’ Championship every single season (barring 2012, which did not hold a teams’ championship).

That means that until 2021, Prema had not been beaten by another team in Formula 3. In 2021 the team claimed the drivers’ title with Dennis Hauger. But they were narrowly beaten by Trident to the teams’ title.

In the 2019 Formula 3 season, the Prema drivers finished first, second, and third. This put the team a whopping 304 points ahead of Hitech Grand Prix, who finished second that season.

Many remember 2020 as one of Prema’s best years to date. They claimed the teams’ and drivers’ titles in Formula 2, Formula 3, Formula Regional, and Italian Formula 4. Mick Schumacher won in Formula 2; he went on to become one of seven former Prema drivers on the 2021 Formula 1 grid.

Oscar Piastri was the Formula 3 champion that year. He went on to win with Prema in Formula 2 the following year. Piastri, Alpine’s Reserve Driver, has also been very connected to a Formula 1 seat for 2023 and beyond.

Is Prema losing its spark?

Prema won the Formula 2 title last season with Oscar Piastri, with Robert Schwartzman helping them grab the teams’ title once again. While Dennis Hauger took victory in Formula 3 that season, his teammates Olli Caldwell and Arthur Leclerc finished in eighth and tenth respectively. This allowed Trident to swoop in and grab the teams’ title from Prema for the first time in Formula 3 history.

In 2022, it might not just be the Teams’ Championship at risk of being taken by someone new. Victor Martins of ART Grand Prix is the current championship leader, and has been in excellent form all season. Hitech’s Isack Hadjar is only one point behind him, with Leclerc a further six points back.

With four rounds still to go, Leclerc, or either of his teammates for that fact, could still be crowned champion. But with more competition from other teams, the risk is bigger than ever. Prema could start to lose its title as the most dominant team in the Formula 1 feeder series.

But there’s a lot to still be said for the Italian team, as recounted by Oliver Bearman after his podium for the team in Austria this past weekend.

“I think the work ethic and the dedication of all the team members really shows and it shows in the results as well,” said Bearman.

“We’ve just been working together really well, always improving since the start of the season, the drivers and the setup. I think we’ve been really strong so far, even in the wet, so it’s been a good first half of the season. Let’s keep pushing for the second half.”