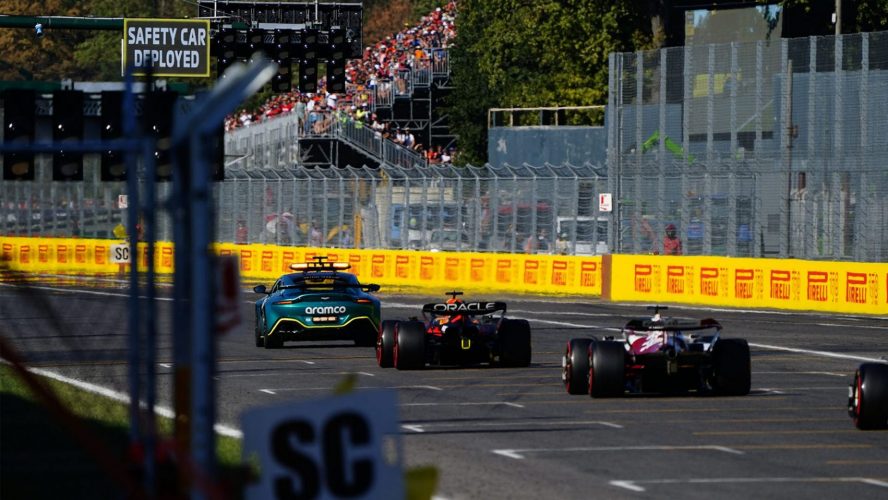 Is it time for a Safety car rethink?

The Italian Grand Prix finished behind the Safety car, causing division in the pitlane.

The FIA have released a full statement and reasoning behind the decision to finish the Italian GP behind the Safety Car. Is it time for a rethink of the rules?

Pundits, drivers and teams alike are divided over the end of the Italian GP. Whilst there can be no argument that Daniel Ricciardo’s McLaren needed recovering from the Lesmo chicanes, concerns are rife again about how it was handled. The desire for green flag racing is now more than ever given F1’s surging popularity. That the words “Safety Car Ending” popped up on our TVs as the cars rounded the final corner was a little farcical.

But, the FIA followed its rules and regulations to the letter at Monza.  No doubt Abu Dhabi 2021 still weighs heavily inside Race Control. Releasing a statement after the race explaining the decision, the FIA said that Ricciardo’s car would not go into neutral. This of course led to the need for a truck to enter the track and recover the stricken McLaren. The FIA said however that “the incident was not significant enough to require a red flag”:

“While every effort was made to recover Car #3 [Ricciardo] quickly and resume racing, the situation developed and marshals were unable to put the car into neutral and push it into the escape road.

“As the safety of the recovery operation is our only priority, and the incident was not significant enough to require a red flag, the race ended under Safety Car following the procedures agreed between the FIA and all competitors. The timing of the Safety Car period within a race has no bearing on this procedure.”

This statement while accurate is also troublesome as it highlights key areas that F1 is not learning lessons from. Experience and events show us the damage that can be done from failing to adapt from negative experiences. Some say from an entertainment standpoint the race should have been red-flagged. However, F1 is always having to carefully balance itself on the tightrope of safety vs entertainment.

Teams and FIA to meet over rules

The thoughts of the paddock are that finishing behind the Safety Car was correct. GrandPrix247 is reporting that teams and FIA will attend a pre-existing meeting on Monday to discuss the ending of the race, and see if any improvements can be made. Christian Horner stated after his driver Max Verstappen had won the race that “we don’t want to win a race under a Safety Car”.  He also said “I’m sure this will be now near the top of the agenda,” for the meeting.

Unsurprisingly, Toto Wolff disagreed with Horner, believing it was the correct outcome. However, the Mercedes Team Principal is open to changing the rules to force a ” big bang show”:

“There are rules and they are written down and from my perspective, whether I’m Abu Dhabi traumatised or not, these rules have been followed to the dot today”

“If one is not happy with the regulations, and you want to have a big bang show and two laps of racing and mayhem, I think I’m absolutely up for it. But then we need to change the regulations.”

Lewis Hamilton meanwhile stated that the incident “brings memories back” of his infamous final lap in Abu Dhabi 2021 when he lost the title to Max Verstappen:

“It always brings memories back. That is the rule that it should be, right?” “(It’s) only one time in the history of the sport that they haven’t done the rule.”

McLaren Team Principal Andreas Seidl also revealed that the teams had met with the FIA after the Abu Dhabi 2021 race, in an attempt to iron out future Safety Car rules. This was unsuccessful:

“Despite the FIA and Formula 1 really pushing us all to find solutions, it was down to the teams and … we couldn’t agree on any better solution,”

“That’s why I guess we simply have to accept that, unfortunately, situations like this can happen”

Ferrari Team Principal Mattia Binotto was critical of the FIA’s handling of the situation, particularly of how long it took Race Control to announce a decision on a Safety Car. Binotto told BBC F1:

“We don’t understand why it took so long for them to decide. They didn’t do a good job today and they simply need to do a better job in the future because it is not good for F1.”

Red Bull's team principle Christian Horner says he would have preferred Max Verstappen to win on the track rather than behind a safety car. pic.twitter.com/Wt3jn6L354

Echoes of a horrific past accident

Regardless of the outcome, the situation on track could have spiralled out of control quickly. Whilst the Lesmo corners where Daniel Ricciardo’s car expired are not the fastest on the circuit, they are not the slowest either. A small straight splits the Lesmo one and Lesmo two.  The video circulating on Tiktok is particularly frightening, showing the cars coming to within a touching distance of the towing truck. This is due to Monza’s narrow track, a factor the FIA realistically should have considered.

Although the procedure was followed in line with the regulations, a far more dangerous situation could have developed. This in turn would have put more lives at risk. Had a car failure occurred, and the recovery vehicle was hit, the circumstances do not bare thinking about. This is not sensationalising, this is a very real possibility in motorsport. Seidl’s revealing comments show this situation could have been entirely avoided. That is unacceptable from a safety standpoint.

Simply, a recovery vehicle close to moving F1 cars is not a scenario that we see often. This is for good reason. The last time this happened there were tragic consequences. Those who watched F1 in 2014 will no doubt remember the horrific circumstances that led to the death of Jules Bianchi a year after he collided with a similar recovery vehicle at Suzuka. Both the Halo and Virtual Safety Car exist as a result of that accident.  I cannot recall another incident over the thirty-plus years of motorsport I have watched involving a recovery truck in such close proximity to moving F1 cars.

From a safety perspective, a red flag at Monza would have negated the danger to the drivers. It would allow an unlimited amount of time to recover Ricciardo’s McLaren, once it became clear the car would not engage neutral. The Safety Car did slow down the cars and was a more obvious solution than the Virtual Safety Car. However, the danger remained. Sending everyone back to the pits would have been a wiser decision.

That could have been so dangerous!! #F1 #ItalianGP https://t.co/iXIxNxMfnk

The procedure followed but time to adapt?

This is where F1 continues to shoot itself in the foot, adhering to its rules and regulations. Although the regulations were not followed at Abu Dhabi 2021, F1 is on a permanent PR mission to state it learned its lessons and follows its regulations to allow racing whenever possible. But inconsistency and lack of adaptability are two terms that have eternally followed F1 stewards and Race Control.

From an entertainment standpoint, it would have made sense for the Italian GP race to be red-flagged.  The downside would be an artificial sprint race. Hugely entertaining yes,  but it also undermines the work the teams and drivers have done. From a safety aspect, as above, there is more than enough to justify a red flag from that standpoint. Charles Leclerc even complained over the radio that the track was clear and he wanted to resume racing. As stated by Christian Horner in 2021, “you only need one racing lap”.

The FIA has prioritised entertainment over rules before. 2021 saw an example of a “sprint finish” at Baku. According to The Race, then Race Director Michael Masi ordered a standing start from the grid with two laps to go after a red flag, believing this to be “in the best interest of the sport”. Whilst this was exciting to see, it was an extreme push for entertainment. The sporting side suffered as a result. There is a compromise to be found somewhere between these extremes. The teams have to work with the FIA to find it and put aside their self-interest.

Mistakes are never far away

It is worth remembering that the FIA has a rule that can stop the race after 75% distance. This is a precedent that goes back decades, with the 2003 Brazilian GP being one of the most prominent examples. Yet even here, the FIA declared the wrong winner. Kimi Raikkonen and McLaren handed over the trophy at a ceremony at the next race to first-time winner, Jordan’s Giancarlo Fisichella.

It also took several years for the FIA to implement changes for the pit lane to remain open when the Safety Car was deployed. Before 2009, if the Safety Car came out and a car headed to the pits to refuel and or change tyres, the driver was awarded a 10-second stop-go penalty. Concerns were vocal for years. Then the FIA quietly introduced the rule change ahead of 2009. Again, the ability to adapt was missing.

FIA must adapt to the future

Regulations on safety and sporting grounds will always be controversial and sometimes a contradiction of the other.  But the ability to adapt to changing times, cars, and audiences is key for a sport to survive. Governing bodies will never be able to please everyone and get every call right, fans only need to look at VAR in football as an example.

But motorsport requires more careful forethought. It is by its very nature a dangerous sport. Keeping drivers and spectators safe is always paramount. But consistency, adaptability and balancing entertainment are problems the FIA continues to struggle with. That the teams and the FIA are meeting again to discuss Safety Cars at the end of a race for the second time in under a year demonstrates the long journey F1 still has left to go in getting these big calls right.

F1 is as much about politics as it is about racing. But when we have what turns out now to be an entirely avoidable incident at the end of a race, the sport needs to look at itself in the mirror and ask if the self-interest is once again negatively impacting the sport. Solutions are found by talking to each other as opposed to the teams brutally taking down the governing body to the media for correctly executing a regulation they could not agree on how to change.

The FIA also shares the blame, as it has once again become lost in its own rules. Following regulations is critical, but adapting rules cannot be limited to the design of the cars or the odd format change. If a rule is outdated it must be adapted. The rule on Safety Car finishes is a clear example of this. A solution can be found, whether it is stopping the race entirely, or resuming and extending the race. Both the FIA and the teams have the power to adapt. It is time they did.