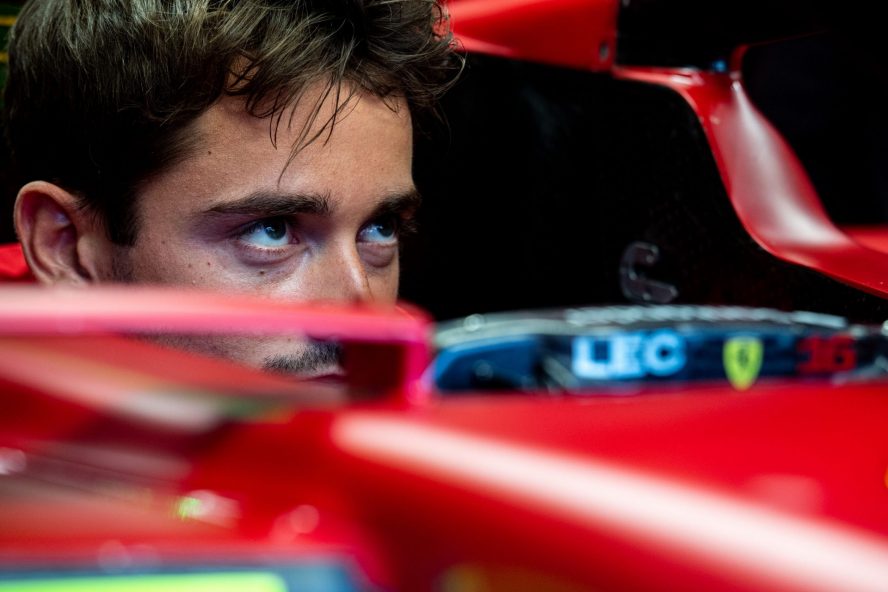 Is it about earning “those one points” for Charles Leclerc and Ferrari now?

Ferrari and Charles Leclerc suffered another disappointing race at Spa-Francorchamps as they drifted away from title leaders Max Verstappen and Red Bull.

Leclerc went into the Belgian Grand Prix with hopes that he would close the gap to Verstappen. The opposite happened after a one-stop plan turned into a three-stop race.

The Monegasque had to perform an early pit stop at lap four because of some smoke he saw coming out from his wheel. Changing onto mediums, he went out planning to last a whole race with his medium compound tyres.

During the race, Ferrari kept asking Leclerc whether he can last longer on his current tyres. The track caused high degradation to the tyres and it was impossible for the teams to perform the race on a one-stop. They asked him many questions, as it was heard during lap 19, too many for a driver to fully concentrate on the race.

Ferrari intended to try to keep Leclerc out for as long as possible so that when they performed the second pit stop, they did not come out behind Alex Albon’s Williams. They performed another pit stop in which they gave him another set of medium compound tyres and their plan worked.

The team saw that a podium finish for Leclerc was long gone but they wanted to try and snatch the extra point from the fastest lap. That is why Leclerc performed another late pit stop, putting on the soft compound to try and earn it. But ahead of him was Fernando Alonso.

He almost lost fifth place to the Spaniard who overtook him but Leclerc did well to gain his position once again. He still ended the race in sixth for speeding at the end of the pit lane when coming out and earning himself a five-second penalty.

So from trying to gain one extra point, to losing two, let’s reflect on Leclerc’s and Ferrari’s weekend.

It can be said that if Ferrari opted to finish off the race in fifth and not contend for the fastest lap, it would have earned them another two points.

Alonso caught up with Leclerc, but the Monegasque managed to overtake him once his tyres were heated up and ready to go. He finished the race in fifth place and with no fastest lap as Verstappen’s Red Bull proved to be too quick to compete with today.

Leclerc was pushed back to sixth because of the five-second penalty he earned for infringing the pit lane speed limit regulations. That is why he collected eight points rather than 10 from Belgium.

But Leclerc did not blame this on his team, he took full responsibility for what happened. He and his mechanics were in agreement in fighting for that one extra point.

He said when asked by Sky Sports, “Well to be honest after the start I was quite hopeful, and then we had the tear off in the bracelet and we had to start everything again. Then I knew it was going to be a difficult race from that moment onward. But P5 in the end, P6 actually, with what happened in the end, so yeah it’s like this.

“The pit lane is not bad luck, it’s just my fault.”

He added, “It’s a mistake and that’s it. On the other hand, we were just not quick enough this weekend. And this is the big problem more than anything. So we need to work on that.”

Ferrari were pretty adamant that they are still in the championship run. After the French GP, in which Leclerc suffered a DNF, Mattia Binotto claimed that they can go on to win the last 10 races of the season.

After the Belgian Grand Prix, the body language and words spoken by both Leclerc and the Ferrari team Principal himself, it seems that hope is starting to be lost.

Leclerc responded to Sky, “It’s starting to look very difficult, especially with the pace they’ve shown this weekend, it’s very very difficult. But I’ll keep my head down, try to focus race by race and do my best.”

When he was asked whether he’s still in the championship fight, Leclerc had no yes or no answer. He simply stated once again that he will keep focusing race by race because it is too difficult to go up against Red Bull and their impeccable speed.

Binotto doesn’t look to hold much hope now either. He admitted that they are counting “on Max not finishing races,” to win the championship.

Ferrari are desperate to take any point that they can have. It showed from the gamble that they were willing to play to earn the fastest lap point.

During the race, we heard Leclerc’s mechanic asking him questions about various things: whether his tyres were still good to race on; how much longer can he go on them; whether he prefers hards or mediums.

For me, it seemed that Ferrari wanted to make sure that the pit lane crew and the driver are on the same page. Understandably so after the mishaps that happened in past races.

On the other hand, it can be argued that while the team asks for feedback, they should be the ones that provide the driver with the best options rather than bombard him with questions. All this while going against 19 other cars at 300km/h.

So again, we see some sort of unreliability from the Ferrari team, which also made a minor mistake on Saturday. Leclerc knew that he was going to serve an engine penalty but went out in Q1 to help his teammate earn a better position for the race.

For some reason, Ferrari sent him out on new tyres, which they should have preserved for the Sunday race. Leclerc asked what he was supposed to do on those tyres. The response was that it was a mistake.

Having to go up against Red Bull, Ferrari do not only need to look at having a fast car, which they already do. They need to ensure that the team is fully focused and knows 101 percent what is going on throughout all sessions. There is no room for mistakes in a sport in which every hundredth of a second count.