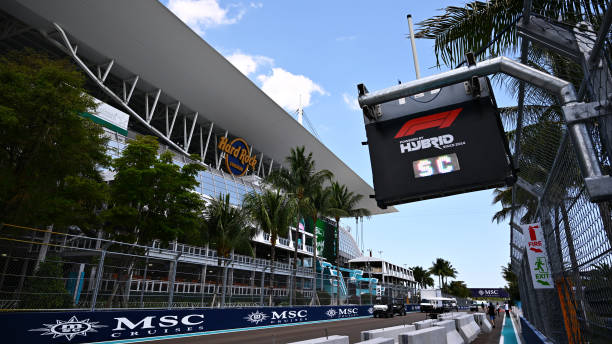 If F1 is launching a US takeover, why isn’t there an American driver?

There may be three US races planned for next season, but that doesn’t mean we’ll see one of their racers any time soon.

Could the brand-new Miami GP, along with Austin and Las Vegas in 2023, prove beneficial for junior drivers from America?

Whatever your feelings about America, you can’t deny that their sporting events never fail to impress.

The opening ceremony took place this morning. It jumped from driver interviews to DJ sets, paving the way for an unforgettable weekend.

F1 has tried to enter the US market for years, with Netflix proving to be the biggest helper. The streaming platform’s Drive to Survive series was immensely popular, bringing in fans from across the globe.

Since the first series dropped in 2019, the fanbase in America has seemed to increase drastically.

However, one major problem with keeping these fans is that they don’t have a driver to root for. It’s no secret that fans like to cheer for someone from their country, someone they can relate to.

Three US venues are set to host races next season. While some aren’t in favour of this many events in the States, it’s an indication that F1 wishes to bring in even more American fans.

We can't wait to be on the Las Vegas Strip! 🤩#F1 #LasVegasGP pic.twitter.com/cUgm2xBTQc

There hasn’t been an American driver since 2015 when IndyCar racer Alexander Rossi competed for Marussia in five races. That’s unless you count Pietro Fittipaldi, who holds dual nationality in Brazil and the US. He temporarily replaced Romain Grosjean at Haas in 2020.

It’s been proven that these drivers can make it in F1, so why are their appearances so rare?

Why is it so tricky to reach F1 if you’re American?

As in the case of most drivers who aren’t European, the main issue is finding reputable series to compete in.

Several current F1 racers moved to Europe at a young age for this reason. Daniel Ricciardo, everyone’s favourite Aussie, relocated when he was 17.

Speaking on the MotorMouth podcast, Alexander Rossi explained that it’s “very difficult to convince parents to move their lives while their kid is 12-15”.

He went on to add:

“Americans are very patriotic people, and it’s hard to get behind a German guy, a Spanish guy, a British or French guy. They want to cheer for an American, which was one of the really good things I had going for me. I did have a lot of support from the American side of things because they did want American representation.”

Many share Rossi’s views, with F2’s Logan Sargeant believing that it’s harder for American and Australian drivers to succeed.

“It definitely wasn’t easy,” said the Williams Academy driver. “Still isn’t easy, I don’t think it ever gets easy. You leave everything behind, your friends, family behind and just sort of restart. So in a way, it’s never going to be the same, but it’s part of it for us. Americans and even Australians are from far away. It’s just part of the sport for us.”

The problem of the Super Licence

Aside from Europe being the place to be if you want to succeed in motorsport, another factor is the FIA Super Licence requirements.

Among other criteria, you must obtain at least 40 Super Licence points in qualifying racing series over the last three years.

Mario Andretti, one of only two American F1 World Champions, criticised the specific criteria. He sees it as a barrier to US drivers, referencing IndyCar supremo Colton Herta as an example.

“I’m pushing like hell for Colton,” Andretti told Autosport. “You’ve got to remember, Colton went to race in England when he was 15 years old, all by himself.

“That’s always been his objective [to get to F1] but he’s very quiet and unassuming, he’s not pushy, but I see a quality there – a Formula 1 quality.

“We’d need the American driver with a top team, not in the back with no chance,” he added. “If you could get an American driver in F1, producing results, you’d have America going crazy for F1.

“Mercedes sells a lot of cars here, it’s a huge market, imagine what they could do with him? It would juice up the TV ratings too. But it has to happen within a year or so, or they’ll consider him to be too old.”

Which US drivers have the highest chance of making it to F1?

Andretti’s support for Herta is far from baseless, with McLaren signing him to a testing role within their F1 team.

Sitting at 32 Super Licence points, he would need to finish third or above in IndyCar this season to be over the threshold.

Herta has certainly proven himself over his racing career, becoming the youngest person to ever win an Indy race at the age of 18.

He said: “It’s so hard to get into F1, that if an opportunity comes, you can’t just sit and wait around.”

Fellow IndyCar and McLaren driver Pato O’Ward has also been linked to a potential F1 seat, but only time will tell if the 22-year-old will ever make the move.

Looking at the more traditional feeder series, there are five drivers from America. In F2, Logan Sargeant likely hopes to use his Williams connections to progress. In F3, Juan Manuel Correa, Kaylen Frederick, Jak Crawford and Hunter Yeany are all fighting to reach the pinnacle of motorsport.

Despite all sacrificing their lives in the US to move to Europe, there is no guarantee that any of them will make it to F1.

The lack of certainty means that most young American racers are instead focusing on the Road to Indy, a combination of three series that lead up to IndyCar.

The feeder championships – Indy Pro 2000, USF2000 and USF Juniors – use a scholarship system to promise progress.

“I mean, the drivers in the Road to Indy are talented, but it would be difficult to make that transition because you would have much less experience. You learn so much for F1 being just in Europe and racing against other people on these tracks.”

Any one of these drivers could be offered an opportunity. If racing on American soil proves to be a success, the number of US sponsors could increase, potentially making it easier for one of their drivers to make it to F1.

Forget American drivers – what about an American team?

Aside from Haas, there is little US representation within Formula 1.

New rumours surrounding the entry of Michael Andretti’s F1 team appear every day, so its future is still uncertain.

After a purchase deal with Sauber fell through, his father Mario Andretti confirmed on Twitter that they had plans to enter their own team for 2024. There has been minimal progress since.

If Andretti Global manages to become the 11th team on the grid, the chances of them signing American drivers would be extremely high.

This means that in spite of the spate of F1 races in America, US fans may have to be a little more patient before one of their own finds a seat.