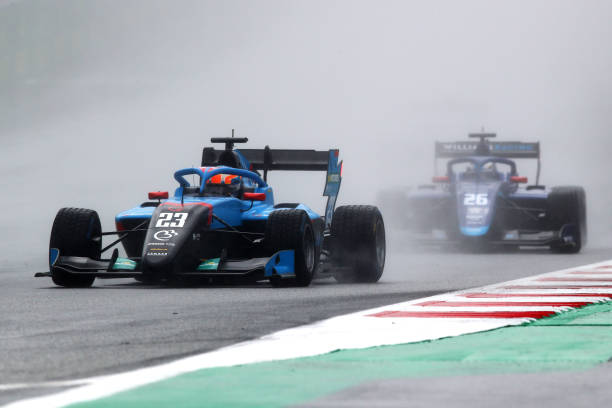 SPIELBERG, AUSTRIA - JULY 10: Ido Cohen of Israel and Jenzer Motorsport (23) drives on track during the Round 5:Spielberg Feature race of the Formula 3 Championship at Red Bull Ring on July 10, 2022 in Spielberg, Austria. (Photo by Joe Portlock - Formula 1/Formula Motorsport Limited via Getty Images)

Jenzer Motorsport driver Ido Cohen claimed his maiden F3 points in Austria after a season and a half in the series.

Cohen made the switch to Jenzer Motorsport for his second season in Formula 3 after being unable to score points in his rookie season at Carlin.

For most of the season so far Cohen has sat just outside of the point-scoring positions. In the opening round in Bahrain, he claimed P14 from the Sprint Race. Continuing on the Sunday, he finished P15 in the Feature Race.

In Imola, it looked as though Cohen’s luck was changing as he claimed P10 in Sunday’s Feature Race. He was, however, quickly demoted to P13 after receiving a five-second penalty for track limit violations.

The Jenzer driver then went on to face another tough weekend in Barcelona. There he placed P22 and P23 in the Sprint and Feature races respectively.

Moving into round four at Silverstone, improvements were being made. Cohen finished the Sprint Race in P17. The Jenzer driver had an incredible turnaround during Sunday’s Feature Race, finishing P15 after starting P20.

This carried forward into Austria where Cohen qualified in P13, just missing out on the reverse grid pole. In Saturday’s Sprint Race he lost out on a place to championship leader Victor Martins. Sunday however saw Cohen’s luck change as he was able to bring home P10 claiming his first-ever Formula 3 point.

Later in the day, he was promoted into P9 after Trident’s Roman Stanek received a five-second penalty for causing a collision with Hitech Grand Prix’s Kaylen Frederick.

Speaking to Formula 3 after the race, Cohen commented on his first point score saying:

“It’s quite exciting to get my first points in the Championship.”

Commenting on his wait for the points, Cohen reflected, “We’ve been waiting for this for a long time. I was already really close to getting them in Imola when I finished P10 but got a penalty for track limits.” Adding “I’m happy we finally got there.”

Talking through the last laps of the race, Cohen could see the chaos unfolding in front of him saying “Obviously, at that point, I knew I was on the cusp of points, so I was focused on having a good restart and staying out of trouble.” He then went on to add that “I was lucky to avoid the accident in Turn 1 and managed to gain some positions and finish P10.”

Formula 3 returns for round six in Hungary (29th-31st July) where Cohen will be looking to secure points once again.

Looking onto the next round Cohen commented “my main focus point until now was Qualifying, which we managed to improve quite a lot in the last couple of weeks.” He concluded by saying “hopefully, we can do even a better job and keep improving on our Quali pace and work on our race pace as well.”

Cohen currently sits P22 in the driver standings while Jenzer Motorsport sits P9 in the Teams.