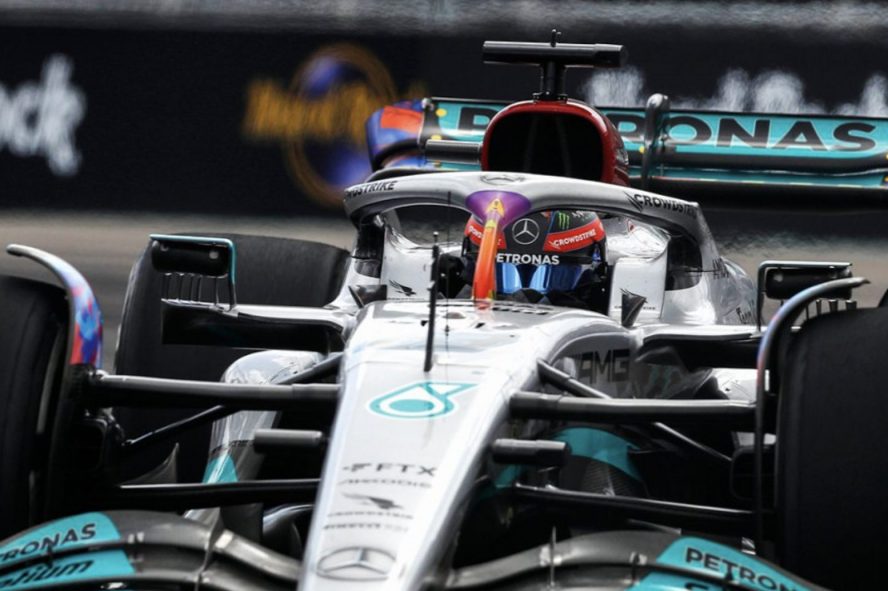 George Russell’s consistency at Mercedes is framing a bright future.

We’re five races in and since his debut at the 2020 Sakhir Grand Prix, he continues to amaze.

In Bahrain, George got P4. While in Jeddah, he finished fifth. Down Under, Russell took third. At Imola, he placed P4. Recently in Miami, George finished fifth. The Brit is the only racing driver to finish top five in all races.

The only driver to finish in the top five in every race in @F1 2022 so far. 🙏 @GeorgeRussell63 pic.twitter.com/ME3oBj4u6B

George has had his fair share of struggles with the car but presses on. He’s honest about his frustrations. It shows true character that he’s willing to learn and progress with the team.

After Miami, Russell revealed, “It’s mixed feelings to be honest because obviously based on where we were yesterday, today was a good result but if you’d told me after Friday we’d finish P5 and P6 and that far behind P1, I’d have been pretty disappointed. We have a fast race car in there, we just don’t have the key to unlock this performance. And we don’t really understand why that is so there’s work to do.”

There’s an interesting cockiness or confidence, depending on how you look at it. As a young 24-year old, he’s got this ambition to drive the best he can each time he gets on track. It’s quite an upgrade from the Williams FW43B to the Mercedes W13. His  determination is impressive.

He added, “Towards the end of the race today, when you’re battling with your teammate, you’ve got to show respect, a bit more room than normal. The move was a bit tricky, I went a bit wide, but it’s so dirty offline around this circuit. Obviously it was clear I went off the track and had to do it all over again. I enjoyed it and I think there’s good respect between us. But Lewis was unlucky today, when you are on 20 lap old Hard tyres there’s not a lot you can do really. It was brutal race out there – so hot, sweating, my eyes were stinging, I had sweat pouring into my eyes, so I need to find a way to get around that.”

The Spanish GP: A Memoir of Misorganisation

Russell is currently fourth with 59 points in the driver standings. He’s even ahead of his teammate seven-time champion, Lewis Hamilton. Meanwhile, Mercedes is third with 95 points in the constructor standings.