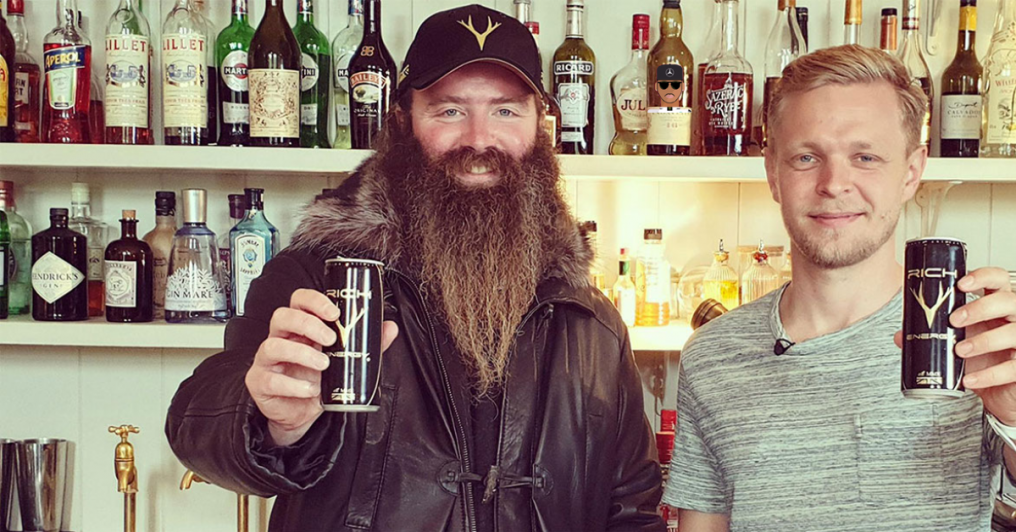 As I sit down to write this, we are a few short days from going lights out in Albert Park to herald the glorious return of Formula 1 for the 2020 season. Over the off season we all eagerly anticipated seeing the new drivers on the grid, Drive to Survive season 2, and pouring over any and all content just to get you through the bleak midwinter. It’s difficult to not reflect on Lewis’ impressive 6th championship (even as a disheartened Ferrari fan), but there is something lurking in the shadows. Elsewhere in the paddock, shenanigans went overlooked. A drama of epic proportions unfolded in the boardrooms of the grid last year with Haas racing at the center. Rich. Energy.
What at first glance seemed a business relationship gone sour actually played out more like a caper of epic proportions. From Zimbabwean tobacco farms, to lewd business practices, to Premier League football clubs and more angles than a geometry book, this tale of woe and deception has it all.

So buckle up as we take you through the Haas Hoodwink.

I, like many of us, was introduced to the C.E.O. of Rich Energy William Storey during the launch of the livery for the Haas 2019 season contender the VF-19.  At first glance, I only had two thoughts.  The first being: “holy beard.”  While a bit outside the norm for the F1 hierarchy to say the least, it could be an interesting dynamic going forward.  The second and more pressing thought was: “who the heck is Rich Energy?”  Storey first burst onto the F1 scene when Sahara Force India was going through their own interesting ordeal in October 2018.  Force India was receiving offers to save the team from going into administration thanks to Vijay Mallya and his financial foibles.  Enter Rich Energy and William Storey.  Amongst the other bidders and propositions (according to Storey in interviews) a deal was close to being reached.  Storey even went as far to inform The Telegraph that the deal was agreed upon at £120m and they were just ironing out the details with investors etc. (well above the eventual £90m paid by Lawrence Stroll and his consortium).    Needless to say, Force India rejects his offer whether it was from pressure at Mercedes, an accountant raising some red flags, or whatever the case may have been.  No matter to Storey.  Next on his agenda: try and become a title sponsor instead of an owner/operator.  Details are few but headway was made with Williams to do just that.  So much so that an offer was close to being reached before Rich Energy turned around and announced a sponsorship deal with Gene Haas and his American outfit.  So sudden was this move that Claire Williams (deputy team principal of Williams) and other notable powers that be were stuck waiting to further discuss the potential deal in Texas while the ink was still drying in the Haas deal.  What would lead all these teams to consider the relatively unheard of Storey and his mystery fizzy drink?  Money.

So where does a relatively new energy drink company come up with that amount of money? According to their financial documents it is pretty simple: they don’t.  According to the Companies House documents (assessing value for most companies in the U.K.), as of 30 September 2017 the ENTIRETY of Rich Energy was worth considerably less.  So little that at the time the document was filed, they only had £581 in the bank.  While their relatively impressive listing of intangible assets tops £1.7m, that is still well short of the numbers we are talking about to obtain Force India from Vijay, no matter how hard up he may be to save his beloved team.  To be fair, these documents would reflect their holdings from 2016 deep into 2017.  Are we really supposed to believe that the total worth of that company rose by over 80 times in a matter of months with staggeringly few people ever having bought a can of this “decadent” energy drink worldwide?

What about William Storey? Is he an opulent mogul who burst onto the scene or is he just a con man running rampant with other people’s money while spinning a web of lies and covered tracks?  To answer that we have to go to Zimbabwe.  Tobacco is Zimbabwe’s leading crop accounting for 23% of all exports.  In 2013, foreign ownership of tobacco farms was prohibited.   So Storey found a clever solution.  He would approach the farms the same way he would the F1 teams and invest in them.  He bought shares in multiple farms in Zimbabwe and then took a cut of the sales.  Rather than investing in the tobacco products, he invested in the infrastructure and farming of it.  By doing so, Storey was able to turn meager investments in farming into substantial returns once the tobacco was sold and exported.  This still wasn’t enough to substantiate the sums required for potential F1 ownership.  Using the tag line “formulated in Croatia, canned in Austria,” Storey quickly dumped most of his financials into a canning facility in Austria.  The trademark for his brand traces back to Croatia in 2011 and presumably Storey was able to convince the owners to back his hair brained scheme.  The Rich Energy trademark as it came to be known took birth in 2015.  He had his formula and his factory in place.  Now he just needed the money to make it all come together and get it out to the world in the way he envisioned.

Enter David Gold and David Sullivan.  These two men have a combined estimated worth over £1.6b.  Rich Energy lists that they are backed by four sterling billionaires.  We are finally talking F1 money.  And boy oh boy are we about to talk about an F1 worthy lifestyle.  Gold and Sullivan are most publicly known for being the owners of the West Ham F.C.  You would like to think that would be a sufficient narrative to say where the rich in Rich Energy comes from.  Close.  Both Davids ran a mail order porn empire that dominated the U.K. in the 70s.  They expanded into shops, production and all manner of seedy ventures within that world.  By the age of 25, Sullivan was already a millionaire thanks to his (bare)back breaking efforts and distribution.  Low and behold, in 1982 he was imprisoned and charged with living off of ill-gotten gains and immoral earnings.  You don’t say?  However, 71 days later he walked out of the clink a free man after winning his appeal (perhaps everything was on tape).  Instead of continuing down the same road, Gold and Sullivan decided to get into the objectively less seedy business of property development and investments with their company Conegate.  Now they were getting their jollies in the public forum of real estate instead and they reached their climax in 1993 when they purchased a massive majority stake in Birmingham which they left in 2009 only to invest in West Ham F.C. as 50% stake holders.  Storey formed a friendship and business relationship with Sullivan as an investor in Rich Energy.  Sullivan is not listed on the Companies House documents, but rest assured there is money changing hands somewhere.

This maelstrom combines to make a very vague corporate presence: a drink no one has ever heard of (much less tasted) and a seemingly wealthy C.E.O. galivanting around the paddock attempting to throw money at the first team that will yield to his demands.  He had finally gotten his foot in the door and proceeded to make his mark with the livery by slapping the Rich Energy antlers all over the Haas car and apparel.  Enter one more wrinkle in this mysterious tale.

According to their website, Rich Energy takes their logos from the stags that inhabit Richmond.  However, Whyte Bikes had an entirely different take on their logo.  Much the same way that Racing Point traced last year’s Mercedes design, the Rich Energy logo utilizes the same font and layout of the majestic stag’s prongs as the bike company (albeit with the addition of two prongs to throw others off the scent).  On May 14, 2019 Whyte Bikes’ case was finally heard by Judge Melissa Clarke.  Throughout the proceedings William Storey was described as a “poor witness” by the officiant. She claimed he “often did not answer questions directly, preferring to make speeches about his vision for his business or alternatively seeking to evade questions by speaking in generalities or in the third person plural. He only answered several questions when I intervened. He had a tendency to make impressive statements, which on further investigation or consideration were not quite what they seemed.”  In essence, the judge called him a rambling liar.  The judge sided with Whyte Bikes and Storey and Rich Energy were ordered to pay them for damages as they were entitled to for use of their logo.  Even as of now, no monies have been awarded and Whyte Bikes are considering further recourse. So in a very bold move, Mr. Storey took to Twitter to voice his displeasure.  My personal favorite comes from June 10th after Whyte Bikes, in a cheeky move, displayed their logo next to the Mercedes W10.

Not a good look for Rich Energy there.  Neither was the tweet from the British Grand Prix.

The board agreed and on 16 July, Storey was sacked as an officer.  Still the madness didn’t end there.  Just over a month later, presumably with his pockets full of Gold and Sullivan money, Storey bought back a majority of shares from Matthew Kell and presumably the Twitter password as well.  As all of this is playing out, Haas found themselves in the midst of a brutally poor campaign.  They began the year with a strong showing in Melbourne only to barely continue outpacing last place Williams.

Taking note of this, Storey took to twitter in one last bizarre tweet while associated with the Haas team.

Unfortunately, Haas was unable to remove the mad man’s logos from their cars for the race as the announcement took them by surprise.  Still, awaiting the long-promised funds from the sponsorship deal and defending their sponsor’s legitimacy all the while, their deal came to a bitter and drama filled end.

In the end, William Storey only paid Gene Haas’ outfit a meager initial installment on the promise of more.  He received massive publicity as a title sponsor with the team without ever holding up his end of the deal and his team was forced to defend the “elite” ghost energy drink of Rich Energy.  With the exception of Moneytron of Onyx fame, it’s hard to find a more bizarre and captivating corporate drama within F1’s history.  However we are not done hearing of Rich Energy in the racing world.  They still sponsor an Indy car entry for Jordan King and have their own British Super Bike entry as well.  Let the madness continue and may the stories be Rich.  Hopefully Haas have a happier season putting all of this behind them.