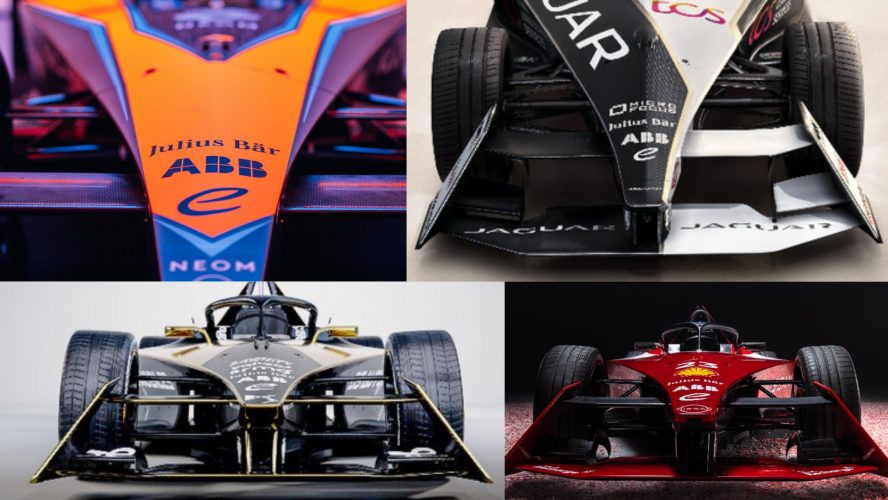 Four more teams have unveiled their liveries for Season 9 of Formula E as pre-season in Valencia this December edges closer.

Formula E are making many changes in Season 9 to make the sport more exciting than ever. First, they announced their all-new Gen3 cars which are set to take to the track officially in December during pre-season testing in Valencia. Then they also confirmed that the fan boost will be scrapped and that there has been a change made to the attack mode. With such a shift, the regulations also needed some amendments.

With that, they also revealed their new logo which will be used going forward. Mexico is almost a month away and more teams unveiled their liveries. Porsche were one of the first teams to reveal their new car. But now four other teams have joined them – McLaren NEOM, Jaguar TCS, Nissan and DS Penske.

So let’s take a look at what the drivers’ new rides look like.

The new team on the grid made headlines over the past week. Not only did they confirm their driver line-up, but they also unveiled their contender for their debut in Formula E. The team from Woking announced Jake Hughes as their second driver for this year, with Rene Rast confirmed earlier in 2022.

Fans are excited to see McLaren take on yet another motorsport series. They have a rich history in Formula 1 and also got themselves involved in IndyCar and Extreme E too. Back to Formula E, though, their livery will probably go down well with those who already supported McLaren in other series.

They didn’t focus on the Gulf look. They’re aiming to present themselves with their original McLaren orange with a hint of blue to make it stand out. The livery was finished off with some black touches along with sponsored logos.

The new Jaguar I-TYPE 6 unveiled the team’s new colours. They made a shift from black and turquoise to black and white. Despite the change in team colours, the driver line-up remained the same with Sam Bird and Mitch Evans contesting once again.

Jaguar are aiming for champagne this year after Evans came very close to clinching the drivers’ title last season. The Kiwi driver said, “Last season was my best to date, finishing runner-up in the Drivers’ World Championship, so we are determined to do one better this season.

“The new Jaguar I-TYPE 6 gives us a lot more to play with, with more power and speed, and the team and I have been working tirelessly to make sure we maximise this effectively to use it to our advantage.

“Formula E is such a competitive category, but I can’t wait for the season to get underway in January and fight to win both the Drivers’ and Teams’ World Championship.”

Nissan are embracing the new beginning that the Gen3 era is bringing to the sport. They’re also showing off their Japanese DNA with the Sakura flower on the side of the Nissan e-4ORCE 04. The new beginning is not only for Formula E but also for Nissan who this year will be competing using the car brand’s name only. Earlier in 2022, Nissan acquired the e.dams operation.

The team also has a new line-up made of Norman Nato and Sacha Fenestraz. Ashwani Gupta, Nissan’s Chief Operating officer said, “Electrification is at the centre of Nissan’s long-term vision, with Formula E playing an expanding role in it. Season 9 marks a new era for Nissan’s participation in the championship. It will be our fifth competing in Formula E but our first as one team.

“We have a long history in racing, and we also love to dare to do what others don’t. Our new livery celebrates our Japanese heritage and I’m certain that the design will stand out on track like never before. I’m really excited for the season to get underway, and I am confident that we have all we need to make the start of the Gen3 era a very successful one for us at Nissan.”

DS Penske are also having a new beginning through their new automotive partnership. Formula E Champions Stoffel Vandoorne and Jean-Eric Vergne will be driving the black and gold DS E-TENSE FE23. DS made a move from Techeetah to join Penske, who once partnered with Dragon Automotive Group.

Penske hope to finally achieve a title after a long time in the all-electric series. Team Principal Jay Penske said, “This season is a defining moment for the team. A new generation of racing car, a new powertrain and a historic alliance with a manufacturer we’ve admired for years. We couldn’t be more excited for Season 9!

“We believe our prospects for the season remain incredibly strong with Stoffel and JEV securing the strongest and most experienced line-ups in the series. I look forward to outstanding results this season and the start of a journey with DS and Stellantis in Mexico City in January 2023.”