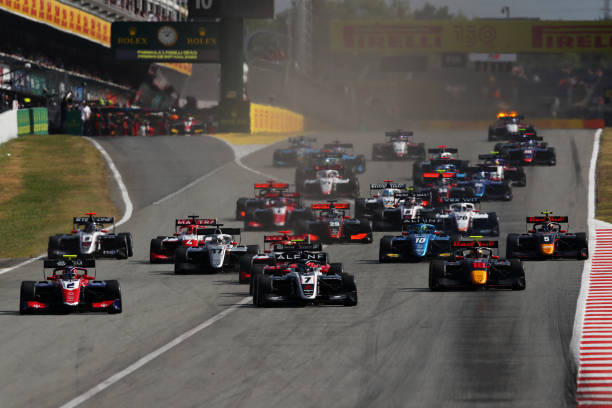 More than a month has passed since the last round

F3 has not graced our screens since the end of May. As the series heads to Silverstone for Round Four, we take a look at how the championship is shaping up.

Back in March, F3 launched its 2022 championship alongside Formula 1 in Bahrain. CEO Bruno Michel unveiled a new weekend format that simplified the system used in 2021.

Like Formula 2, drivers are allocated one 45-minute practice session on Friday, followed by a 30-minute shoot-out to pole. There is then a sprint race on Saturday (in which the top 12 qualifiers are reversed), and a typical feature race on Sunday. The races are slightly shorter than in F2, at 40 and 45 minutes respectively.

A whopping 16 out of 30 of this year’s competitors are rookies hoping to make their mark.

In Bahrain, Franco Colapinto claimed pole for Van Amersfoort Racing who made their first appearance in F2 and F3 this season. Starting in 12th for the sprint race, he fell down the order. Meanwhile, Red Bull junior Isack Hadjar took his maiden win and was joined on the podium by Oliver Bearman and Alexander Smolyar.

Making a return to the series, Victor Martins took victory on Sunday. Arthur Leclerc closely pursued him after improving from 13th to 2nd. Whilst polesitter Colapinto crossed the line third, his five-second time penalty promoted Gregoire Saucy onto the podium.

One in, one out

Ahead of the next round in Imola, a number of shock lineup changes were announced.

In addition, Trident’s Jonny Edgar withdrew following a diagnosis of Crohn’s disease. He recently revealed the brilliant news that he will be able to compete in Silverstone.

Poor health was a pattern ahead of Imola as Correa sat out both testing and the Italian round due to a stress fracture in his foot.

Round Two marked the first time the series raced at the historic Imola circuit. With two testing sessions taking place in Jerez and Barcelona before this round, the drivers were ready to tackle the tricky conditions.

The weekend began with a hectic wet qualifying session that eventually saw Zane Maloney deliver the fastest lap. An incident between Leclerc and Enzo Trulli ruined qualifying for both of them; the subsequent red flag also caused a confusing end to Friday.

The chaos continued into Saturday’s sprint race. Colapinto converted his reverse pole into a maiden win, but he was probably the only driver to have a good race. Errors and collisions were relentless, as demonstrated by the appearance of two safety cars.

Sunday wasn’t much different as rain further complicated racing. There were penalties and spins aplenty, but Roman Stanek avoided these to take the win and fastest lap. Crawford and Hadjar followed him across the line.

As the majority of drivers took part in testing in Barcelona in April, there was much less tension heading into this round.

There was yet another change ahead of the weekend as Lirim Zendeli replaced Schumacher at Charouz. This marked Zendeli’s fourth time competing in Formula 3 after he withdrew in 2021 for financial reasons.

With 30 cars battling for space around the track, it was Roman Stanek who emerged victorious in qualifying. Despite the drivers’ wealth of experience at this circuit, several commented on the significant impact degradation had on their lap times.

This did not disturb rookie David Vidales, who dominated the sprint to take his home win for Campos. Crawford was painfully close to victory at times, but he could only manage P2 ahead of Caio Collet.

Moving forward to Sunday, a number of collisions benefitted Martins, enabling him to take his second win of the season. Meanwhile, polesitter Stanek only lost one place whilst Hadjar finished in third for the second round in a row.

As F1 extended its contract with Albert Park in Melbourne, it was revealed that the feeder series would race in Australia for the first time. Depending on your point of view, this is either the most exciting or underwhelming news. Criticism directed at Bruno Michel cited his 2021 plans to cut costs for young drivers.

However, the CEO has also been praised for his commitment to increasing female diversity in motorsport. He said that those in the industry “absolutely need to prepare young female drivers to get them to the level of Formula 3 with success”.

There was a beautiful few weeks after Imola when Martins and Leclerc were level at the top of the standings. Since then, the Alpine academy driver has charged ahead of the young Monegasque.

With two feature race victories and 62 points to his name, Martins leads the championship. Stanek is only six points adrift as fan favourite Leclerc lingers in fifth place with 43 points.

The top ten are as follows:

Looking to the team standings, Prema are on track to take their third victory. The team has 120 points; ART Grand Prix will be hoping to narrow their 22-point deficiency in Silverstone.

With six rounds remaining, it is still all to play for in Formula 3.