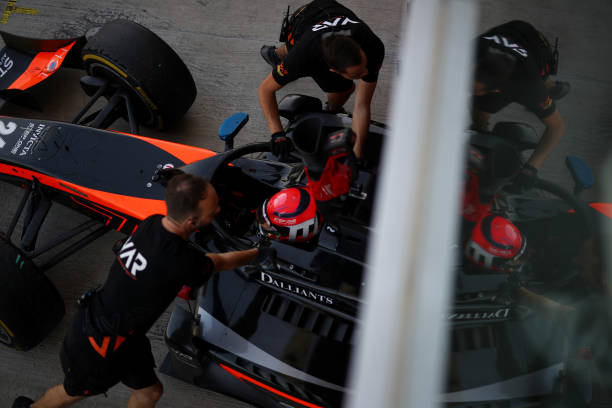 After three days of testing in Abu Dhabi, Formula 2 is officially over for the year.

23 different drivers took to the track at Yas Marina throughout three days of testing. 11 of them were Formula 3 drivers in 2022, and the rest were current Formula 2 drivers. Only seven drivers have officially been confirmed for next year’s grid.

It’s important to note that times in testing are hardly representative of a driver or team’s pace. Everyone has different goals, whether it’s getting used to the car, doing qualifying runs, or figuring out how to work the tyres. There’s not an easy way to figure out who is doing what, so judging pace based on testing results isn’t always accurate.

That said, there’s still a lot to learn from looking at what happened during the three days of post-season testing.

Only seven of the drivers at post-season testing have confirmed their plans for next year. PREMA Racing’s lineup of Oliver Bearman and Frederik Vesti was the first full team to be announced. Campos Racing is retaining Ralph Boschung for what looks to be his final year in Formula 2, and he’ll be partnered by Kush Maini.

The other confirmed drivers are Dennis Hauger with MP Motorsport, Arthur Leclerc with DAMS, and Clement Novalak with Trident.

Hitech Grand Prix ran Red Bull juniors Jak Crawford and Isack Hadjar for all three days of testing. Both of them are all but confirmed to be graduating from Formula 3 with the team for 2023.

A few drivers made telling switches for testing. One of them was Zane Maloney. The Formula 3 runner-up competed in Formula 2 with Trident in the final round but has since told FormulaNerds he won’t be continuing with that team. He tested alongside Enzo Fittipaldi at Carlin Racing.

Many teams have already decided their driver lineup for next year, but there are still choices to be made. One seat still undecided is Theo Pourchaire’s ART Grand Prix seat. The Formula 2 runner-up this year looked likely to switch to Super Formula at one point, but after taking part in post-season testing with the team now looks more likely to stay another season in Formula 2.

Along with Charouz Racing System, VAR is one of the teams whose likely driver lineup is still unknown.

Next year’s title fight should be one to remember

With the 2023 grid slowly taking shape, we’re getting a picture of what next season will look like. Already the promise of a good title fight is evident.

Formula 2 tends to be exciting no matter what happens, but an already talented pool of drivers is set to be joined by some of the best Formula 3 drivers from last season.

On one hand, drivers like Jack Doohan, Ayumu Iwasa, Dennis Hauger, and Theo Pourchaire (if he stays) have already proven their ability to succeed in Formula 2. Those are just a few of the drivers who had success in 2022 that will be in the hunt for the 2023 title.

On the other hand, making the step up to Formula 2 are some formidable threats to even the more experienced drivers. This season the top seven drivers from Formula 3 are all (most likely) among those making the step up.

Frederik Vesti, moving to PREMA for 2023 for his second Formula 2 season, finished in the top three of two days of post-season testing. Verschoor topped day 1, Doohan topped day 2, and Martins topped day 3. Bearman was also up there in quite a few sessions, as was Iwasa, creating a mix of soon-to-be rookies and more experienced drivers.

The talent pool also includes several Formula 1 academy drivers. Vesti is a member of the Mercedes Academy, while Bearman and Leclerc are Ferrari juniors and Martins and Doohan are connected to Alpine’s Academy.

Looking ahead to the 2023 Formula 2 season, it’s already shaping up to be one to remember.