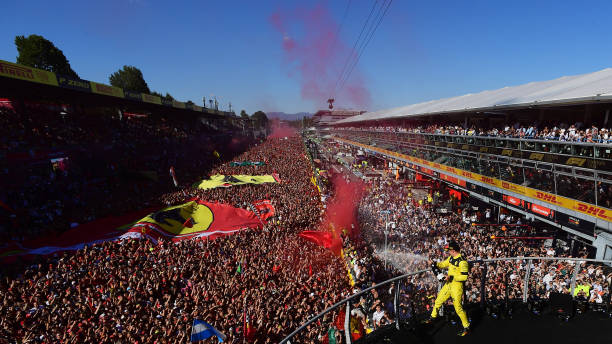 It was the 1966 Italian Grand Prix at Monza. This race was expected to be the end of the championship fight. John Surtees needed to win the last three races of the season to beat Jack Brabham to clinch the world championship.

In qualifying, Mike Parkes took his only pole in F1 although taking pole at Monza is as meaningful as beating a team on FIFA on amateur difficulty. Ludovico Scarfiotti was second, aiming to become the first Italian winner at Monza since 1952, 14 years prior.

The race started and the first opening laps where a typical Monza race.  Four drivers led with the two title contenders, Lorenzo Bandini and Parkes all leading.

Brabham retired due to an oil leak, leaving Parkes & Scarfiotti to duel for the lead. However, this gifted Brabham a third title aged 40 as well as the first (and only) title for an owner-driver. Scarfiotti took the lead from Parkes on lap 13 and led every lap after that, barring lap 27. Surtees retired on lap 31.

Scarfiotti, a Turin native, took the first win for an Italian on Italian soil since Alberto Ascari in 1952. Super Scarfi!

Now we move three decades on to 1995. Benetton/Michael Schumacher & Williams/Damon Hill are duelling for the constructors & drivers championships with six rounds to go. Schumacher & Hill’s teammates, Johnny Herbert and David Coulthard were fighting for third along with Jean Alesi, who had taken his only win in Canada. Herbert meanwhile had taken his maiden win at Silverstone, however, Coulthard was yet to win, although something told everyone it would happen eventually. Would it be this weekend?

Well it looked that way as Coulthard took a brilliant pole position and led the opening laps before a disappointing retirement on lap 13. Gerhard Berger’s Ferrari then led to the delight of the home crowd with Schumacher and Hill in tow. Then, when coming to lap Taki Inoue’s slow Footwork Arrows, Hill hit Schumacher off into the gravel trap for the second time that season, resulting from both of them retiring from the race. Four different drivers then led due to pit stops as Hakkinen, Barrichello, Herbert and Alesi all led the race from lap 25-28.

Alesi took the lead and Berger was second until he suffered a strange retirement following a tv camera falling off Alesi’s rear wing. This caused Berger to retire from the race with 21 laps left. Alesi led until lap 45, when he too retired with a wheel bearing failure with all of eight laps left.

Herbert then occupied the lead and took his second win in F1, moving him ahead of Alesi and Coulthard in the fight the standings, also helping Benetton pull a large gap on Williams following a double DNF from the British outfit.

On the podium with Herbert was Mika Hakkinen and Heinz-Harald Frentzen, who took Sauber’s maiden podium.

With 25% of the season and four races to go, four drivers could win the 1999 title: Mika Hakkinen, Eddie Irvine, Heinz-Harald Frentzen and David Coulthard. After qualifying, it was expected that Hakkinen would take another dominant win after getting pole by half a second from Frentzen. Coulthard was third, meanwhile Irvine was just eighth after the difficult qualifying.

Hakkinen did dominate until lap 30 when the championship was blown wide open. Hakkinen spun off at turn one and just like that, Frentzen led.

Frentzen led all but one of the remaining laps, holding a dominant lead thanks to Alex Zanardi’s damaged underfloor holding up Ralf Schumacher, Rubens Barrichello, Mika Salo and Coulthard. Frentzen kept a good gap to Schumacher and took his second win of the season. He was ahead of Schumacher and Salo, who took a shock second podium for Ferrari whilst filling in for Michael Schumacher, who had a broken leg.

This race meant that Irvine was tied on points with Hakkinen with three rounds left. Frentzen was still in the title fight, only 10 points behind (25 points in modern F1). It was a measured drive for Frentzen and it was his final win in F1 before his retirement from the sport in 2003. Also, that race was Jordan’s third win in F1 and their first and only win in the dry. It was also the third occasion a German had won at Monza. Fantastic Frentzen!

Heading into round 14/18 in the 2008 season, McLaren’s Lewis Hamilton led the world championship. He had a two points over Ferrari’s Felipe Massa. Meanwhile, in his first full season, Sebastian Vettel came into the Italian Grand Prix at Monza on 13 points.

The weatherman looked at the weather and thought: “It’s going to be as crazy as having Pineapple on Pizza!”

It was set to be wet for every session that weekend. This meant there was a chance for midfield teams like Toro Rosso, Williams, Red Bull and Toyota to sneak a surprise in. It was the first three who managed to strike. Vettel took a stunning pole, becoming the youngest polesitter in F1 history by 164 days. He beat Fernando Alonso’s old record from 5 years prior.

The race started and Bourdais stalled, causing a Safety Car. Vettel kept the lead until lap 18, when he pitted. At this stage, he had a 7 second gap to Kovalainen.

Vettel wrote his name into the history books and went on to become a four time champion with Red Bull. He was Super Seb!

Lewis Hamilton was dominating the championship in 2020 and qualified on pole for the race. Meanwhile home teams Ferrari and AlphaTauri didn’t qualify particularly well. The two Ferrari’s qualified  in 13th and 17th whilst the AlphaTauri’s in 10th and 11th. The race started and Hamilton was running away with it yet again.

On lap 6, Sebastian Vettel had a brake failure heading into Turn 1 and had to retire from the race. Then the drama started on lap 17 when Kevin Magnussen’s Haas retired with a power problem. This resulted in the Safety Car coming out.

The pitlane was then closed because Magnussen’s abandoned car was on the entrance. However, Hamilton pitted when the pit lane was closed, meaning he received a penalty.

On the restart on lap 32, Charles Leclerc had a horrific spin into the barriers, causing a red flag. Under the red flag, many drivers changed tyres and thus could go to the end of the race.

Gasly was one of them. The combination of Max Verstappen’s retirement, Hamilton’s penalty and slow cars at the front meant Gasly could pull away from the rest of the field. Carlos Sainz’s McLaren managed to catch Gasly with two laps to go but could not pass the Frenchman.

Gasly became the first French Grand Prix winner since Olivier Panis in Monaco in 1996. It was AlphaTauri’s first win since they were known as Toro Rosso in 2008 at the same track. Perfect Pierre!