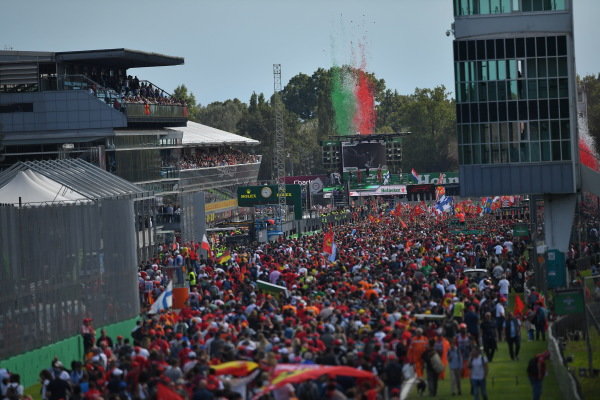 Monza is a magical track within Formula One

Formula One heads to Italy this weekend for the Italian Grand Prix, Ferrari’s home race. As the weekend gets underway, here are five Magical Moments from Monza.

The first F1 Italian Grand Prix was in 1950, held at Monza (like all but the 1980 edition have been) and it was a special occasion. Two Italian drivers had a shot at becoming the maiden F1 champion: Giuseppe ‘Nino’ Farina and Luigi Fagioli, both driving for Italian manufacturer Alfa Romeo. The only man who could stop them was their teammate, Argentine Juan Manuel Fangio. Fangio was on pole, but the second and third rows were Italian filled with Ferrari, and Alfa Romeo filling out the first seven spots on the grid, six of these drivers were Italian.

The chances of there being an all-Italian podium with both driver and team were: for the driver a 37% chance and the team a 74% chance. The Tifosi got their wish: Fangio retired not once but twice as he had a shared drive with Piero Taruffi and Farina won the title. Farina won ahead of Ascari/Serafini’s shared drive for Ferrari and Fagioli was third.

It was Italian Inspiration. This is the only time in F1 history that an all-Italian podium has happened in Italy (including the San Marino, Emilia Romagna, Pescara and Tuscan Grand Prix).

Heading into round nine of the 1967 season, Jim Clark was 24 points behind Denny Hulme with three races left of the season. Clark did what he needed to in qualifying and got pole ahead of Jack Brabham (Hulme’s main title rival and teammate). He led nine of the opening 12 laps before picking up a puncture on lap 12 and fell a lap down. He then spent the next 48 out of 56 laps chasing the pack down, taking the lead with nine laps to go. On the last lap, however, Clark ran out of fuel. This caused John Surtees and Jack Brabham to duel to the line in their Honda and Brabham, with the former coming out on top. Clark finished 3rd, closing the gap to Hulme by 4 points as he didn’t finish the race.

By the championship’s end, Clark finished 3rd behind Brabham and Hulme, with the Kiwi winning his only title with no poles. Clark took six poles but had double the car issues of the others. Clark lost his life seven months later at Hockenheim and this performance is remarked as one of the finest in history. Comeback Clark was one of the best.

The reason the lead of the race changed so much was due to the heavy amount of slipstream caused by four straights being on the track. This also meant it was the fastest lap in F1 in 1971 in speed (due to Spa-Francorchamps being taken off the calendar), with 150mph per lap being the average speed.

Heading into the last corner, Gethin’s BRM was barely ahead of Peterson, Cevert, Hailwood and Howden Ganley. Heading over the line, the fans were pulsating as it looked as though any of these drivers could win. Sadly for the Tifosi, both Ferrari cars (Jacky Ickx and Regazzoni) retired from engine issues.

As they crossed the line, it was Gethin who won by a nose hair, with just 0.01 seconds between him and Peterson. The gap was six-tenths between Gethin and Ganley – the closest finish in F1 history at the time and an extremely exciting ending. Gethin took his only win in F1, and Stewart and Tyrrell had already won the title, so the title race was irrelevant.

Niki Lauda was on top of the world and until round 10 of the championship at the Nordschiffe in Germany was leading the championship in 1976. On race day, Lauda started 2nd and when the race started, the rain began to stop. Everyone, barring McLaren’s Jochen Mass, started on wets as he predicted the rain would cease and was spot on. Due to this, everyone except Mass pitted for dry tyres and subsequently was affected – some positively and some negatively.

Lauda fell down the field and heading into a fast kink, Lauda’s car went out of control, snapping to the right, erupting the car into flames after bouncing off the barriers. As a result of the collision, he was knocked out. Harald Ertl, Brett Lunger and two nearby drivers (Guy Edwards and Arturo Merzario) managed to pull him out of the flaming wreckage.

Lauda suffered severe burns and was rushed by helicopter to the Bundeswehr hospital in Koblenz. From there he was flown to the Trauma Clinic in Ludwigshafen, Germany’s most advanced burn unit in 1976. He was read the last rites twice, just showing the severity of the crash.

However, just 40 days after his life-threatening crash, Niki Lauda returned to the Ferrari seat. He made it just in time for the Italian Grand Prix at Monza, Ferrari’s home race. Lauda went on to finish 4th after qualifying 5th.  He beat his teammates (Ferrari had 3 entries as Lauda wasn’t expected to return) in qualifying before Regazzoni finished 2nd in the race. James Hunt, his championship rival, was only five points behind with three rounds left. Hunt won the championship in the end, but Lauda went on to win another two championships in 1977 and 1984.

On August 14th, 1988, the greatest figurehead in all of racing passed away aged 90. That man’s name was Enzo Ferrari.

In 1988, nothing could stop McLaren – their MP4/4 was insane. The combination of Gordon Murray’s design, Ayrton Senna and Alain Prost’s driving and the incredible Honda power made them unstoppable.  They won every race up until the Italian Grand Prix on September 11, with Senna winning seven and Prost winning four.

Heading into the race, Ferrari were comfortably second in the championship. Their drivers, Gerhard Berger and Michele Alboreto, were 3rd and 5th in the drivers’ standings.

Qualifying was a drag, with McLaren locking out the front row with Senna leading from Prost until Prost retired on lap 34, moving the Ferrari’s up a place with 66% of the race done. Senna led until he approached a backmarker, the slow Williams of Jean-Louis Schlesser. By coincidence, Schlesser’s uncle, Jo, died while driving a Honda in the 1968 French GP.

Schlesser then didn’t let Senna through and collided with him, causing McLaren to lose any chance of a 100%-win streak in 1988. Ferrari now led 1-2 with 3 laps left, Berger ahead of Monza Native Alboreto and that is how it would finish.

For the first time in almost a year, Ferrari won a race. The victory was even more emotional though as it was in front of the home fans in the first race after “il Commendatore’s” death. It was a sight to behold. Ferrari had, for the 5th time, got a 1-2 at home. Since then, it has happened three times, thanks to the dominant Schumacher era.

Formula One returns to Italy for the Italian Grand Prix this weekend. Who will win: Red Bull or Ferrari?