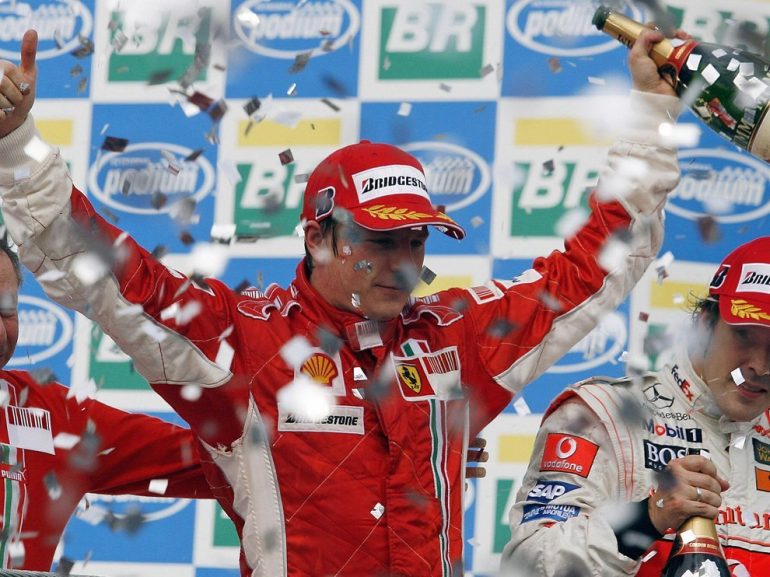 Ferrari’s reigning World Champion – and how it happened

The three-way title fight of the 2007 season was decided in the last round – the Brazilian Grand Prix on 21 October 2007. 14 years later, The Iceman still remains Ferrari’s latest World Champion.

The 2007 season brought Raikkonen, what had already almost been his on two occasions in 2003 and 2005, when he just about missed out on the World Title. After five years with McLaren, Raikkonen moved to Ferrari for the 2007 season to replace 7-time world champion Michael Schumacher. Raikkonen was not only getting to know a new team, and a new car, he was also up against Felipe Massa. The Brazilian had not only had a year’s head start, but had a close relationship with the team boss.

The season started amazingly for the Finn, with a win in the season opener in Australia. But what followed, were a series of frustrating races which allowed McLaren-Mercedes duo Lewis Hamilton and Fernando Alonso to quickly jump to the top of the leaderboard. Problems to put a lap together in qualifying and disappointing race finishes even led to speculation about his future with the Scuderia.

Raikkonen had a lot of catching up to do. At the end of the Japanese Grand Prix that season, the Finn was 17 points behind Hamilton, with only 20 up for grabs over the final two races.

Lewis Hamilton arrived at the last race in Brazil with four points ahead of his teammate Fernando Alonso, and a seven points lead ahead of Kimi Raikkonen. For the first time since 1986, three drivers were in contention for the title heading into the final race. All that Lewis needed was a fifth place if Kimi won and third place if Alonso won. Once again, Sao Paulo would take center stage in the title fight.

In the Friday practice session, the Ferrari drivers had already topped the timesheet with Raikkonen leading a wet FP1 session. It came with little surprise, that the Scuderia was faster at Interlagos, and secured first (Massa) and third (Raikkonen) place at the start, while Lewis and Alonso were second and fourth.

Pre-race points leader Hamilton had a bad race that afternoon. Right at the start, Raikkonen swept past the Briton, and as Hamilton lost momentum, his teammate was able to get past as well. Hamilton, braking late on the outside of turn 4 battling Alonso, went off the track and dropped down to eighth position.

Eight laps later, Hamilton’s hopes for the title got an even bigger blow, as the transmission of his McLaren got stuck in neutral for the longest 30 seconds. It got back up to speed further around the circuit, but by that time he had fallen down to 18th position. Hamilton spent the rest of the race battling his way back through the field, and managed to finish 7th.

At the front, the Ferraris pulled away from Alonso quickly, underlining the speed they’d had all weekend. Alonso over the course of the race never came close to the win, lapping up to a second slower than the two Ferraris. Massa appeared to have the edge over Raikkonen, and led by as much as three seconds. However, after running three laps longer in the second pit sequence, the Finn was able to jump ahead of Massa and into the first position he needed for the title.

The race ended with Raikkonen in first, Massa second and Alonso third. With 110 points, the Finn won the World Championship by 1 point ahead of both Hamilton and Alonso, who were tied with 109 points. Hamilton ended the season in second place on countback, with one more second-place race finish than Alonso.

Ferrari had already secured the constructor’s title as McLaren were excluded from the constructor championship and stripped of all points following the Italian Grand Prix for theft and illegal usage of confidential technical information of Ferrari.