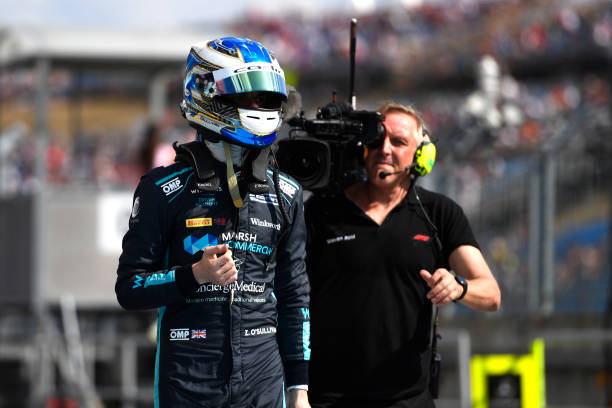 BUDAPEST, HUNGARY - JULY 29: Zak O'Sullivan of Great Britain and Carlin (26) walks in the Pitlane after stopping on track during qualifying ahead of Round 6:Budapest of the Formula 3 Championship at Hungaroring on July 29, 2022 in Budapest, Hungary. (Photo by Rudy Carezzevoli - Formula 1/Formula Motorsport Limited via Getty Images)

Zak O’Sullivan climbed from 22nd to finish fourth after a well-timed pit stop in the Feature Race at Hungary.

The British driver for Carlin made the best of a poor qualifying, and took a risk during Sunday’s race that paid off massively.

Qualifying didn’t go O’Sullivan’s way. With three minutes to go, he stopped on the start/finish straight with a mechanical issue and brought out the red flag. This problem in Qualifying meant he would start both races from 22nd on the grid.

Both races in Hungary were wet. In the Sprint Race O’Sullivan recovered to 18th, but it was the Feature Race that allowed him to make a bold choice.

Making the decision with his team to switch to slick tyres on a drying track allowed O’Sullivan to make up 18 places and finish fourth.

“I saw the track was drying quite a bit and actually saw [Juan Manuel Correa] behind me come into the pits and decided to take the risk,” O’Sullivan told Formula 3.

“Obviously, I knew we were outside the points positions and probably weren’t going to score any. I thought it was worth the risk.

From there, it was just a matter of passing almost everyone else on the grid for O’Sullivan. Despite understanding his pace right after switching to the slick tyres, he still wasn’t sure where they would end up.

“My engineer was keeping me updated on positions and lap times and I think once I knew I had like a ten second delta to the wet runners, I thought P5 was possible. We were passing three or four cars per lap. I was never fully sure where we were going to finish.”

The rest of the season

O’Sullivan has had some brilliant results this season in a car that often struggles for pace. In the first round at Bahrain, he qualified 12th, putting him on reverse grid pole for the Sprint Race.

But that wouldn’t be the only race O’Sullivan would get to start from the front row. In Silverstone, he managed to score his maiden pole position and went on to finish second in the Feature Race.

With 46 points, O’Sullivan is currently 11th in his rookie season of Formula 3. Despite some great results for him and the team, the British driver is keeping his expectations tempered for the rest of the season.

“I think for the remainder of the season this result doesn’t really change too much,” O’Sullivan said. “In general, as a team we’ve struggled for pace. Obviously, I made the right call with the team in the Feature Race which really helped us score some good points, but we’ve got to wait and see.

“We’ve been a bit up and down all year, some races strong, others not. We’ve got Spa, Zandvoort, and Monza as the last three rounds and hopefully we can pick up a few more points.”

Formula 3 has just three rounds to go, the first of which will take place at Monza next month.