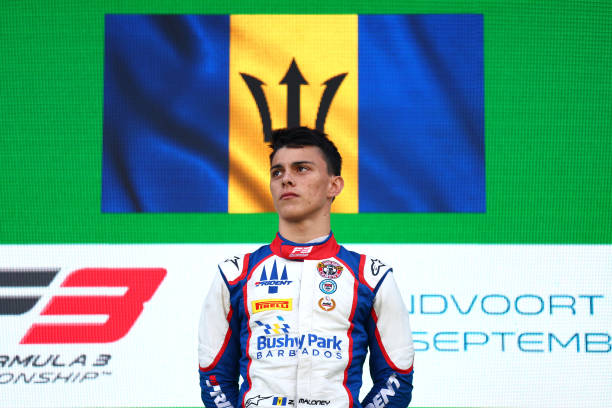 ZANDVOORT, NETHERLANDS - SEPTEMBER 04: Race winner Zane Maloney of Barbados and Trident (3) celebrates on the podium during the Round 8:Zandvoort Feature race of the Formula 3 Championship at Circuit Zandvoort on September 04, 2022 in Zandvoort, Netherlands. (Photo by Alex Pantling - Formula 1/Formula Motorsport Limited via Getty Images)

Zane Maloney finished second in the championship, after taking three Feature Race wins in a row.

The boy from Barbados narrowly missed out on the Formula 3 title to Victor Martins, an impressive feat for a rookie.

Following the end of the season, Maloney sat down with FormulaNerds to discuss his rookie year, the title-deciding race, and his plans for next season.

Ending on a high

Maloney’s rookie season had a bit of a rocky start. He qualified seventh in the first round and turned that into a fourth-place finish in the Sprint Race. But after an incident in the Feature Race he failed to finish.

The Trident driver wouldn’t stand on the podium until Round 6. But after that, things turned around. Maloney took his first podium with a second place in Hungary, before taking three consecutive Feature Race wins to round out his rookie year.

“Of course, three Feature Race wins in a row, and then a P2 the round before, it feels amazing,” said Maloney.

“We couldn’t have done much more at the end of the season, the team has given me a great car all year.

“Of course it’s very frustrating losing the championship by five points, and how it ended as well. It makes me look back to Imola and Barcelona. But yeah, we came back strong, and the mindset has been the same from halfway through the season until now and it’s really been working, and the mindset into whatever I do next year will be the same as what we ended up this year. So I’m really looking forward to whatever I do next year and fighting from the beginning.”

Maloney was the second polesitter of the 2022 season, claiming the fastest time on Friday at Imola. But he would have to wait to take his maiden win, as he spun out of the lead in wet weather and had to retire from the race.

In fact, Maloney didn’t even score points in a Feature Race until the fifth round in Austria. But after that, he made it to the podium for the next four, finishing second in Hungary’s Feature Race, and then winning in Spa, Zandvoort, and Monza.

While his pole at Imola didn’t have the happiest of endings, Maloney still cited it as one of the highlights of his season.

“Of course, the first pole in Imola was nice,” he told FormulaNerds. “Obviously what happened happened in the Feature Race. So that was one of the highlights, since then I’ve been in the top three the whole season I think, except for one round.

“That was the first highlight, and then obviously these three race wins, it means a lot to me, to the team, and it shows that we’re currently in form and we’re doing a great job week in and week out. So I’ve had a lot of highlights this year, obviously a lot of low moments in Bahrain and Imola, Barcelona, and Silverstone.

“My season really started in Budapest, and I just need to learn from that and next year the same thing won’t happen again.”

The title battle came down to the last race of the season, with five drivers in contention. 16 laps in there was a red flag, and the race was not resumed. While Maloney was in the lead at the time, Martins in third was still on track to win the title.

Then Martins received a time penalty for track limits, and everything was plunged into chaos as everyone waited to see who would be crowned champion.

In the end, Martins’ penalty demoted him to fourth place, and he took the title by just five points over Maloney.

While the Trident driver was happy to win the race, he admitted that it was “heartbreaking” to have a chance at winning the title only to lose it by such a short margin.

“Of course I saw, obviously, the red flag, I got out of the car and at that point I had been told nothing. I thought the race was resuming, then we heard it wasn’t and I still didn’t know anything.

“I was very happy with the win, I knew I couldn’t do anything more. And then of course when you hear about the five-second penalty a bit of hope comes in.

“To be honest, it was very heartbreaking when I got told that maybe I won, and then now P2 in the championship. But Victor deserves the championship, he’s done a great job all year. He’s been tough to beat, and overall when you look back at the whole season, he’s won the season.

“He did a great job, nothing much to say to be honest. We came P2  which is still a great result, and well done to Victor.”

To come second in the championship as a rookie is no easy feat. Despite a bit of a rocky start, Maloney has clearly impressed as a Formula 3 rookie, and has proven his ability to fight for the title.

While a switch to Formula 2 could definitely be a good option for Maloney, it might be smarter for him to stay in Formula 3 for another season and have a better shot at the title.

FormulaNerds asked Maloney whether he’d prefer to stay in Formula 3 for another year, or move up to Formula 2.

“Well I’ve not shown everything I can do, firstly,” he answered. “Secondly, I let ADD Management deal with that stuff. I try to do my job on track, perform on track, and then my performance will allow them to do different stuff off the track.

“So whatever I do next year I’ll be going for it from Round 1, obviously remembering what happened at the start of this year and not making those mistakes again.”

Interestingly, Maloney is not currently taking part in Formula 3’s post-season testing, which is happening this week at Jerez. It could be a hint at his plans for next year, but Formula 2 still has a round to go before the end of their season, and silly season for both series is only just getting started.