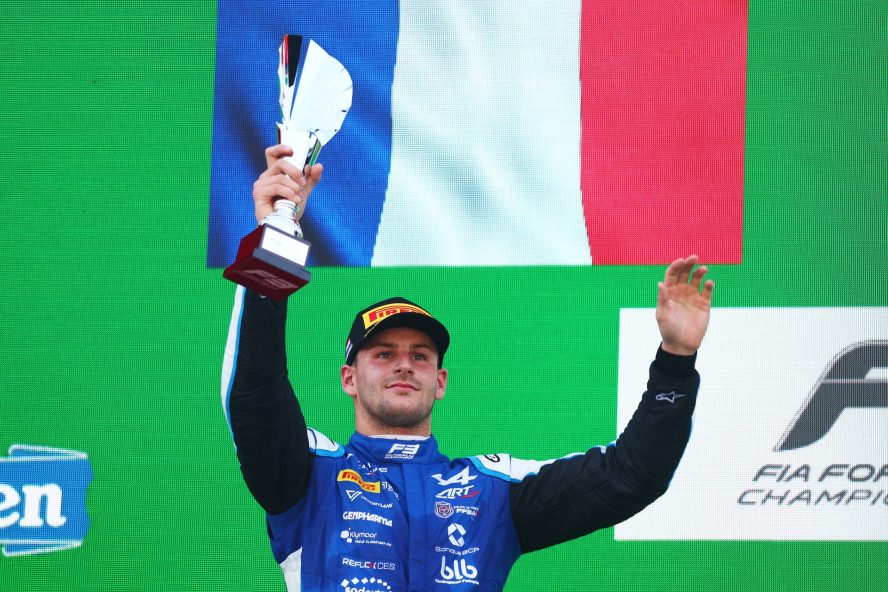 F3 Exclusive: How Victor Martins wrestled back control of the championship fight ahead of title decider

French driver, Victor Martins, is in his second season in F3. After a scoreless round in Belgium, he bounced back at Zandvoort to regain control of the title fight. FormulaNerds spoke to him across the weekend

Victor Martins has reasserted himself at the head of the F3 title fight. Whilst his championship rivals failed to capitalise at Zandvoort, he brought home valuable points.

Having led the championship for much of the season, the 21-year-old went into the triple-header equal on points with compatriot Isack Hajdar of Hitech. The latter ahead, courtesy of attaining more victories thus far.

Martins had gone scoreless at Spa-Francorchamps, on a messy weekend which saw PREMA’s Ollie Bearman push him down to third in the championship standings. Despite this demotion, the Alpine junior found himself just a solitary point behind Bearman and just another behind Hadjar.

The ART driver came into the weekend at Zandvoort knowing he had to impose his pace, and experience, on the title fight. He did just that.

After only focusing on the immediate task at hand, he now heads into the title decider leading the championship. However, he’s still viewing himself as the underdog.

FormulaNerds spoke to him across the penultimate round, as he looked to correct the mistakes of the previous weekend. But how did it all unfold, and what does it mean for Monza?

After topping the timing sheets in Friday’s free practice, Martins went into qualifying knowing that he had the performance and confidence to execute.

A late red flag, with less than a minute on the clock, compromised many drivers’ runs, including, most notably, Ollie Bearman, who subsequently had to line up P14 for both races.

In the midst of chaos, Martins secured P2 on the grid. Hadjar qualified in P6. In the post-qualifying press conference, Martins told a selected group of media, including FormulaNerds, that he encountered traffic on his last push lap, but “managed it quite well to end up in P2.”

When speaking with Tom Clarkson, Martins pointed to the feature race on Sunday as his main focus for the weekend.

Asked by Clarkson about the closeness of the championship, Martins shared how he had changed his approach to the previous weekend in Belgium.

“To be honest, since this morning, I didn’t really think about it,” the Frenchman said.

“I did in Spa and it all went wrong, so I will say, the best for me will be to just keep going in the same way – to not think about it, just push, delivering the best job possible in the car and see where we are.

“And I know I have the potential and I have the team also behind me to make it in the end. So yeah, we need stay calm, just doing our job – our best job on the track and maximising what we have achieved.”

FormulaNerds asked Martins how his free practice performance had translated into P2 in qualifying. He remarked that the “quite strong” session from him was the result of trying to ‘be in the game, in the rhythm from the first push [lap]” to build confidence and provide the “right feedback” to ART.

All this culminated in the “right choice on the set-up for quali,” and a P11 for Saturday’s reverse-grid sprint race. With Hadjar lining up P7, Martins knew it was critical to minimise the points loss to the Hitech driver, on a circuit that is notoriously difficult to pass at.

Taking off like a rocket! 🚀@VictorMartinsFR surged from P11 on the grid up to P7! How important will those four points be at the end of the season?#DutchGP #F3 pic.twitter.com/3LaKLmKCZa

To achieve this, it was clear in Martins’s mind what needed to be done. Speaking to FormulaNerds after the Saturday race, he zeroed in on how he managed to only lose a little ground to Hadjar, who started four places up the grid.

“I tried to really focus on the start and the first laps. You know, when you start P11, you did a good in the day before the sprint race. So, you really want to go ahead and make positions at the start where it’s the easiest to do,” Martins said.

“So, I really tried to do a good one, it happened, and then I was quite opportunistic, and I placed myself well in turn 1, so I was in P7 after that corner. After, it was just a DRS train all the way to the end.”

With Hadjar only finishing in P6, Martins had seized the advantage heading into Sunday’s feature race. All that was left now, was to execute on the opportunity to re-take the championship lead heading into the final round, at Monza.

“Starting from P2, you kind of have more to lose than to gain, you know. But I’m confident that I’m managing this and the pressure quite well so I will be able to put all my focus on trying to win the race.”

The feature race proved to be a more difficult challenge than Saturday’s affair. After taking the lead from Trident’s Zane Maloney at the start, Martins found himself under near-constant pressure for the rest of the race.

More fearless than the pigeons! 🐦😆

A bold and brave launch put @VictorMartinsFR in P1 at the race start! 💪#DutchGP #F3 pic.twitter.com/uNOagAeYxx

Whilst managing the lead, and trying “maximise what I had,” Martins felt performance start to drop away.

“I felt a drop, you know like, on the feeling in the car, the balance. I think we weren’t as quick as the beginning,” he explained. This allowed the Bajan driver to close the gap and retake the lead from Martins.

The ART driver went on to add how difficult the race was from his perspective. In pursuit of better balance, he was reporting to his team where they could help him and try to find solutions. In the end, P2 was the best result available.

VAR’s Franco Colapinto could smell blood and harried Martins for the remainder of the race.

“Franco behind was pushing a lot. I know him also from the past – he’s an aggressive driver, so sometimes, you know, I was protecting a lot my place, because I felt the need.”

Despite not taking the win, Martins acknowledged that it was “a good weekend overall,” and one in which he’d shown “strong pace.”

From three points back to Hadjar after Saturday, Martins’s P2 has given him a five-point lead – 126 points to 121 – over his compatriot, as F3 heads immediately to Monza for the season finale.

After consistent points in Belgium and the Netherlands, Trident’s Roman Stanek sits in third on 109 points.

The approach of not thinking about the title fight clearly proved effective for Martins at Zandvoort. However, despite regaining the championship lead, he still isn’t viewing himself as the favourite for the title.

After the feature race, FormulaNerds asked him if he would retain the mentality that he’s the underdog going into Monza.

“I think yeah. I will put myself not in the, I will say, I’m the guy who has the most pressure, you know?”

Martins knows that it’s Hadjar who has to outscore him to have any chance at winning the title. And it’s Martins who is coming off a stronger weekend.

“I think we are in a good momentum from this weekend,” Martins explained. One of the keys to that momentum will be avoiding the mistakes of Spa.

“I have learned a lot on myself in Spa, I know where it was coming from – all those, not many mistakes, but all those little mistakes which was costing a lot in the morning time. I know where they are coming from, so I will make sure to approach Monza like I did this weekend.”

Ultimately, Martins cuts the figure of someone who knows exactly what they need to do to take home the F3 crown. He poignantly concluded with: