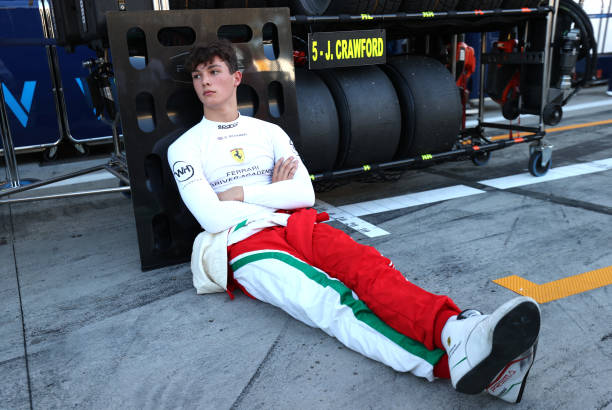 MONZA, ITALY - SEPTEMBER 11: Oliver Bearman of Great Britain and Prema Racing (6) reacts at the end of the race during the Round 9:Monza Feature race of the Formula 3 Championship at Autodromo Nazionale Monza on September 11, 2022 in Monza, Italy. (Photo by Alex Pantling - Formula 1/Formula Motorsport Limited via Getty Images)

Ollie Bearman came tantalisingly close to clinching the F3 title in his maiden season, but what will come next?

Oliver Bearman finished third in his rookie season of FIA Formula 3 with one race win to his name.

The PREMA Racing driver took a double podium in Monza to round out his season but lost out on the title by just seven points.

Following the season, FormulaNerds spoke to Bearman about the title decider, his rookie season, and his plans for next year.

Headed into the final weekend of the Formula 3 season, Bearman was fourth in the standings behind Victor Martins, Isack Hadjar, and Roman Stanek. While Martins went on to take the title, it was Zane Maloney who jumped ahead to finish second, with Bearman taking third.

Bearman qualified sixth but came through to finish second in both races in Monza. He told FormulaNerds about the weekend and how he came through the field.

“Qualifying was quite tough, I didn’t quite manage to get my perfect lap. It’s obviously going to be difficult with this slipstream fest. So you know, I felt I had really strong pace, which I managed to show in the races.

In both races, Bearman picked off drivers to make his way to second place, coming from seventh in the Sprint Race and sixth in the Feature.

In the final race of the season, the PREMA driver had made his way up to Maloney, who was leading the race, by Lap 14. He overtook the Trident car, but it was off the track and he was forced to give the place back.

Two laps later, the red flag came out and the race was not resumed. Maloney won the race with Bearman in second, while Martins took the title. Had Bearman successfully made the overtake on Maloney, he might have secured second in the championship.

“I mean, there’s a lot of ifs and buts in this situation,” Bearman commented. “But in the end, I think I needed a lot of things to go my way today. Some of them didn’t, which was unfortunate.

“The incident with Zane, he’s fighting me hard, that’s kind of in his nature to be super aggressive. I felt I was ahead at the apex, but clearly, the stewards did nothing. But it’s not a problem, that’s not the reason I lost the championship this year, so no hard feelings.”

Bearman ended up, not just third in the championship, but ahead of both of his more experienced teammates. It was a close battle between the three Prema drivers, but in the end, Bearman finished 18 points ahead of Arthur Leclerc, and 23 ahead of Jak Crawford.

He scored one race win, with seven podiums on top of that. He also managed the impressive feat of a double podium not once, but twice.

Bearman listed all these accomplishments when asked about the highlights of his rookie year in Formula 3, saying “Of course the win in Spa, also the double podium in Spa. The podium in Silverstone was really nice, although it wasn’t the win. I think one more lap for the win in Silverstone, but it was nice to stand there in front of the home fans. And then also of course this weekend, two podiums, was a highlight as well.”

But it’s not all been successful for Bearman in his first year. He also talked about what he’s learned and how he improved throughout the season.

“I think I’ve improved a lot in how I do the races. It sounds stupid, but I think at the start of the year I was quite desperate, going for every move possible. Now I’m letting the race come to me because people make mistakes, and I feel like I’ve done a better job of benefiting from others’ mistakes rather than making the mistakes myself.

“Then, of course, I’ve been improving in qualifying and tyre management, but that is the kind of stuff that will come with more laps so that’s a bit of a given.”

Plans for the future

Whatever Bearman does next season, he has a good foundation in his rookie Formula 3 season. If he stays in this category for another year, he’ll be prepared for a more mature title challenge. If he moves up to Formula 2, he has a successful year of Formula 3 under his belt.

He told FormulaNerds that he doesn’t know what his plans are yet, but that he feels ready for next season.

“Of course, momentum is good mentally, for me to show I was fighting at the front with the best drivers. So it’s nice, I don’t know what I’ll race in next year, but for sure it will give me confidence in whatever championship I do.”

Notably, Bearman isn’t at Formula 3 testing this week. That doesn’t mean he won’t be racing in Formula 3 next season, but it might give a clue as to what Prema might be hoping to do with him.

As far as his plans for the winter break, Bearman wants to take it easy.

“First of all, I think I’m going to do nothing for a good couple of weeks. I’ve got some simulator work pending, so that should keep me busy and sharp. But I think I’ll have a nice relaxing winter break, get back into the training routine after a couple weeks, and then wait for my plans or announcement for next year.”

It might be a while till Bearman’s plans for next season get announced. Formula 2 has two months until its season is over, and that’s when things will start to fall into place for many of these drivers.