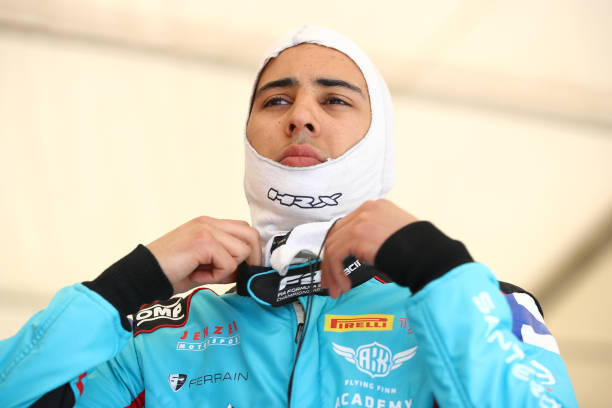 BAHRAIN, BAHRAIN - MARCH 18: William Alatalo of Finland and Jenzer Motorsport (25) prepares to drive during practice for Round 1:Sakhir of the Formula 3 Championship at Bahrain International Circuit on March 18, 2022 in Bahrain, Bahrain. (Photo by Joe Portlock - Formula 1/Formula Motorsport Limited via Getty Images)

As Jenzer driver William Alatalo turns 20 today, we take a look at his racing career so far.

Alatalo made his single seater debut in 2017 in the Formula STCC Nordic Championship. He scored four podiums that season, one of them being a race win.

In 2017, he also competed in two rounds of the Formula 4 UAE Championship with Mücke Motorsport. While a total of 17 drivers were classified in the points standings, only four competed in every single round.

Of the 13 part-time drivers, Alatalo finished fifth highest, putting him ninth overall in the standings. Despite only competing in eight races, he finished half of them on the podium and took two consecutive race wins.

In 2018 Alatalo moved up to the Italian Formula 4 Championship with BWT backed Mücke Motorsport. In this category, he would race against many current F2 and F3 drivers, like Enzo Fittipaldi, Jack Doohan, and Oliver Rasmussen.

Alatalo had a solid season, outpacing both his full time teammates, Niklas Krütten and Ido Cohen. He scored two podiums; first place in Monza followed by a second place in the next race, also at Monza.

Fittipaldi won the 2018 Championship, while Alatalo finished eighth in the standings with 106 points. His points total was over double the number of his closest teammate.

He remained in the series for 2019. This season, Dennis Hauger won the Championship, and Alatalo finished ninth, albeit with a few more points than the previous season.

Notably, in 2019 Alatalo also competed in one round of the ADAC Formula 4 Championship. Three races at the Red Bull Ring were all he did throughout that whole season. But he continued to do well in one-off appearances and scored two podiums. After just three races, Alatalo ended up 16th in the standings, outscoring three full-time drivers.

For 2020, Alatalo joined JD Motorsport to race in the Formula Renault Eurocup Championship. Again up against a pack of future Formula 3 drivers, Alatalo finished eighth in the standings with two podiums scored in Imola.

He moved up to the Formula Regional European Championship for 2021, this time with Arden Motorsport. This season, though he finished 11th in the standings and only scored one podium, Alatalo consistently scored good points.

Gregoire Saucy won the Championship that year. He, along with Alatalo and many other drivers on the grid, progressed up to Formula 3 for 2022.

Alatalo joined Jenzer for his Formula 3 debut. He was fast in pre-season testing with the Swiss team but said that the jump from Formula Regional would be a big adjustment. He was fast in the first qualifying sessions as well, setting a lap time that would have placed him 7th had it not been invalidated for a track limits violation.

After Round 1 of the Championship, Alatalo sits 15th in the points with a ninth-place finish in Bahrain giving him two points.