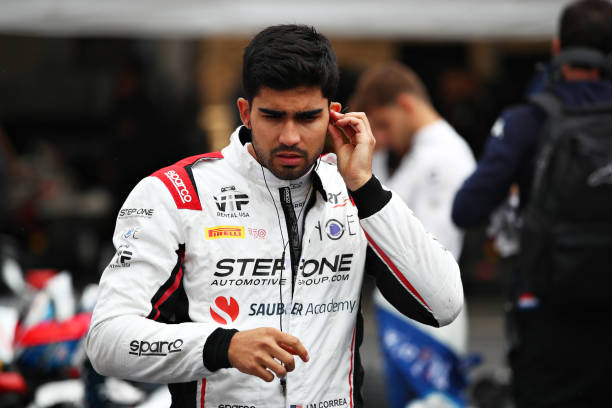 The Ecuadorian-American driver is currently racing with ART Grand Prix

Sauber Junior Juan Manuel Correa is currently in his second year of Formula 3. But unlike his peers, he’s working his way up the single-seater pyramid for a second time.

After making his way up to Formula 2, the Ecuadorian-American driver was involved in an accident that left him seriously injured. His story so far is one of perseverance and recovery.

Correa began karting in 2008 and continued until 2015. His most notable achievement was winning the Rotax Max Challenge Junior title in 2013.

Correa’s success in karting was enough for him to be noticed by the Lotus F1 team. He became a member of their junior team for 2014 and 2015. That deal fell through when Lotus was bought by Renault.

In 2016 Correa signed with Prema Powerteam and made his single-seater debut in the Italian Formula 4 championship. Partnering Juri Vips and Mick Schumacher, the three also competed in ADAC Formula 4 that season.

Correa returned to both series for 2017, this time teammates with Vips and Marcus Armstrong. But he only completed two rounds of Italian F4 and was ineligible to score any points. While Vips and Armstrong finished first and second in ADAC Formula 4 that year, Correa missed the final two rounds and finished tenth.

Instead of finishing ADAC Formula 4, Correa moved to the GP3 series with Jenzer Motorsport for the final four rounds. He didn’t score any points in these races but returned full-time with the team for 2018.

He scored consistent points throughout the 2018 season and finished 12th, well above his only full-time teammate that year.

In 2019 Correa was promoted to Formula 2, this time racing with the Sauber Junior Team by Charouz. His teammate was Callum Ilott, and Correa outperformed him for most of the season.

But then, in the Feature Race at Spa, Correa was involved in the tragic accident that killed Anthoine Hubert. He sustained significant injuries to both his legs, as well as a minor spinal injury. Following this accident, Correa was forced to sit out the rest of the 2019 season, as well as the 2020 season.

Correa made his return to racing in 2021, racing in Formula 3 with ART Grand Prix. He scored a point on his first round back, finishing tenth at the second Sprint Race in Bahrain. He went on to score a total of 11 points and finish 21st in the championship.

While finishing 21st to his teammates’ fourth and sixth looks disappointing, Correa made good progress throughout the season.

Later, when talking about his 2021 season, Correa told FormulaNerds that it was “a very difficult season, in more than just the sporting ways.

“I was playing a patient role and trying to be a racing driver at the same time.”

Correa returned to Formula 3 with ART for 2022. His improvements and recovery since 2021 were immediately obvious. He qualified sixth and scored points in both races in the opening round, finishing ninth in the Sprint Race and fourth in the Feature Race.

But he suffered a stress fracture in his left foot and was forced to miss the second round of the championship at Imola. But he managed to recover in time for the following round, and again scored a double points finish.

Correa currently sits 13th in the standings with 30 points. Ahead of the round in Hungary, he told FormulaNerds that experience has helped him improve, but that he’s looking for better results for the rest of the season.

“I think it’s obvious why [this season] is better, there’s a natural progression, especially on the physical side with myself, but also I’ve gotten to know the team better, and I know the F3 car quite well by now. I have the experience, but I definitely want to make a big step up for the last part of this year.”

Following these quotes, Correa qualified 18th in Hungary and went on to finish sixth in the Feature Race on Sunday. Looking ahead to the final three rounds of the championship, he has a good foundation and should be able to score some good results.