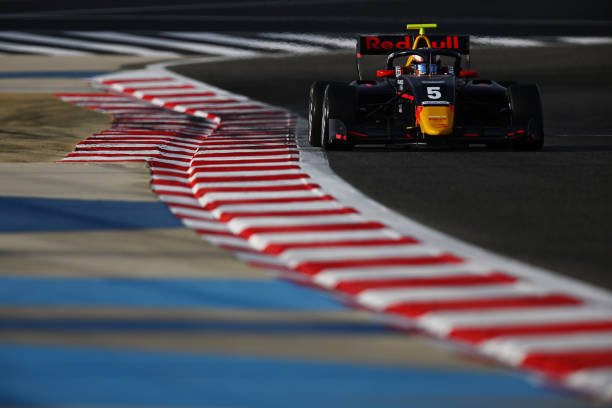 BAHRAIN, BAHRAIN - MARCH 18: Jak Crawford of United States and Prema Racing (5) drives on track during qualifying for Round 1:Sakhir of the Formula 3 Championship at Bahrain International Circuit on March 18, 2022 in Bahrain, Bahrain. (Photo by Clive Mason/Getty Images)

Jak Crawford is an American Red Bull junior racing with the highly successful Prema Racing team. He’s in his second season of FIA Formula 3 and will be looking to compete for the title in 2022.

Born in Charlotte, North Carolina, Crawford has already stood on the podium in Formula 3 at the young age of 16. Now, backed by a top Formula 1 team and racing for the most prestigious team in the entire feeder series, he’ll be hoping for much more than that.

Crawford began karting in 2011 at the age of six. He continued to race karts until 2018, mostly in North America. Then he made his single-seater debut in the 2018 NACAM Formula 4 Championship with great success. Throughout the season he took three pole positions and secured six wins. Outpacing all his teammates easily, Crawford finished second in the standings.

In 2019 Crawford competed in the bottom step of the Road to Indy ladder, the U.S. F2000 Championship. He was unable to compete in the first round due to age restrictions but joined in at the second round with DEForce Racing. Halfway through the season, he switched teams going to Cape Motorsports to finish out the year. Despite all these changes, Crawford finished seventh in the standings.

Instead of progressing to Indy Pro 2000, Crawford was signed to the Red Bull Junior Academy for 2020. He competed in ADAC Formula 4 and Italian Formula 4, both with Vans Amersfoort Racing. In ADAC Formula 4 he took five wins and finished second to fellow Red Bull junior Jonny Edgar by just two points. The COVID-19 pandemic prevented Crawford from taking part in all the rounds of Italian Formula 4, but he still finished sixth in the standings with two wins to his name.

Next, Crawford was announced at Hitech GP for the 2021 season of Formula 3. He finished that year 13th in the standings, having scored 45 points and a best finish of second place. Along with Formula 3, he also contested several rounds of the 2021 Euroformula Open Championship. He took the most poles of any driver that season, setting the fastest lap in qualifying in all but one of the rounds he competed in. After winning eight races, he finished third in the standings, placing higher than many drivers who raced full time in the series.

For 2022 Crawford was recruited to Prema Racing for his second season of Formula 3. He is one of three Red Bull juniors to compete in Formula 3, alongside Jonny Edgar and Isack Hadjar. After the first round, he sits tenth in the standings. A mechanical issue meant he qualified 21st, and the issue carried over to the Sprint Race, where he finished well outside the points. But, on Sunday, he made his way up to finish in the points.

With his teammates Arthur Leclerc and Ollie Bearman proving that the Prema car has the capacity to be very competitive, Crawford will be hoping he can make up for lost time in the rest of the season. Should he make it to the top, he’ll be America’s first FIA Formula 3 Champion.