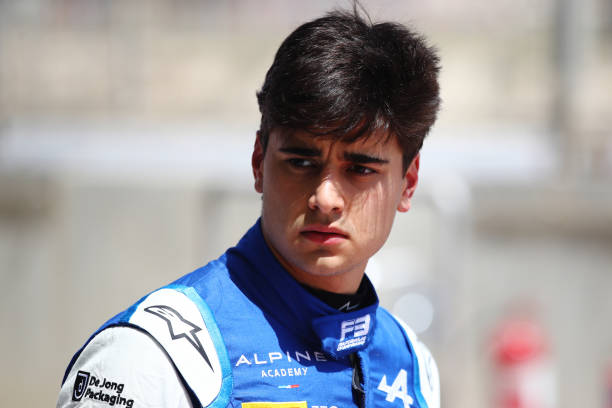 BAHRAIN, BAHRAIN - MARCH 18: Caio Collet of Brazil and MP Motorsport (10) looks on during practice for Round 1:Sakhir of the Formula 3 Championship at Bahrain International Circuit on March 18, 2022 in Bahrain, Bahrain. (Photo by Joe Portlock - Formula 1/Formula Motorsport Limited via Getty Images)

As Brazilian driver Caio Collet turns 20 today, we take a look at his career so far.

Like many successful drivers, Collet entered motorsport at a young age.

He began karting in his home country when he was 7 years old, taking multiple victories before moving to Europe.

At 13, he was crowned CIK-FIA Rookie of the Year. This was a clear demonstration of his early talents, which have continued to develop over the years.

The Brazilian was signed by ART Grand Prix in 2016 and later became a member of the All Road Management Scheme.

This is led by Nicolas Todt, son of former FIA president Jean Todt. He set up the scheme with the aim of scouting and managing racers from karting through to F1. Drivers such as Charles Leclerc and Felipe Massa have worked with him; Todt was credited with helping Massa in his crucial move from Sauber to Ferrari.

Based on this, it is evident that Collet’s skill shone through in the early years of his career, paving the way for later success.

Chasing the dream in Europe:

Collet made his single-seater debut in the 2017/18 Formula 4 UAE Championship.

He made his mark in his first race, taking an impressive third place.

Despite competing in only seven races, he finished on the podium each time with just one exception.

He also raced in French F4, where he became champion in the final race of the season. This involved beating other young talents, including fellow F3 driver Arthur Leclerc.

With 11 podiums and 3 pole positions to his name, Collet finished 66.5 points ahead of nearest rival Ugo de Wilde.

This dominant performance earned him a place in the Alpine Academy, formerly known as the Renault Young Driver Program.

His new signing led to him competing in the Eurocup series in both 2019 and 2020.

In 2019, he drove for R-ace GP alongside Oscar Piastri, Aleksandr Smolyar and Grégoire Saucy.

The following season, he remained with the team and took three podiums in the opening races. These included his first Eurocup victory at Imola.

It was initially a hard-fought battle with French driver Victor Martins as the two exchanged the lead of the championship across several races.

However, Collet began to face problems, including an unlucky collision and a mechanical issue. His misfortune forced him to abandon hopes of winning the series.

At the penultimate race, Martins clinched the title, finishing 44 points ahead of Collet.

His promising performance in Eurocup opened up opportunities for the young driver.

In October 2020, he took part in the post-season test for MP Motorsport, going 10th quickest in one of the sessions. Later that month, he joined reigning champions Prema Racing for the second round of testing.

MP Motorsport announced that Collet would drive for them the following season alongside Tijmen van der Helm and former rival Victor Martins.

The 2021 season began with a stunning podium in Barcelona, which became one of Collet’s most impressive drives that year.

He only managed to score six points across the next six races but was lauded for his remarkable consistency. Throughout the season, he failed to score at just one venue.

Eventually, he finished 9th in the standings, becoming the second strongest of that year’s rookie drivers.

Sticking with MP Motorsport, Collet has had an underwhelming start to the season.

Tweet above: “I am very happy to announce that I will continue together with MP Motorsport in FIA F3. It’s a very important year in my career and I’m very happy to also have the support of Alpine Academy for the fourth year in a row.”

Formula 3 has had one race weekend so far, supporting Formula 1 in Bahrain.

He was 13th in qualifying, moving up to 7th in the sprint race where he earned four points.

During Sunday’s feature race, he became the unfortunate victim of a first lap incident. Whilst trying to avoid a collision, he broke his front suspension by driving over a kerb at Turn 7, causing a retirement.

Currently, he sits 13th in the standings.

With another eight races to prove himself, Caio Collet may still be one to watch.