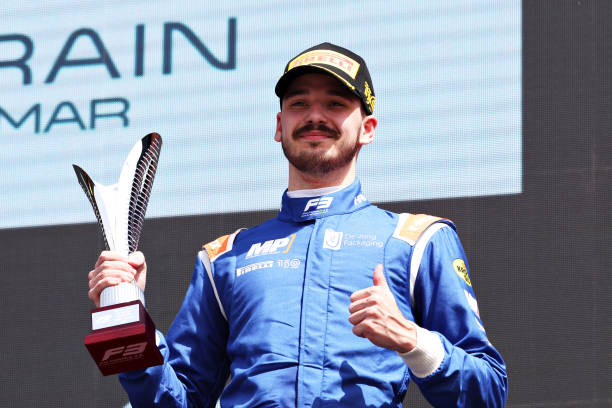 Between budget problems and an International crisis Smolyar barely got a seat for the 2022 season.

Russian driver Alexander Smolyar is in his third year of Formula 3. While he hoped to be fighting in Formula 2 by this point in his career, he’s happy just to be racing this season.

While budget issues have slowed down Smolyar’s Formula 2 aspirations, the war between Russia and Ukraine almost stopped him from competing in Formula 3 for 2022. After finding a way to still drive for the MP Motorsport team this season, he currently sits in sixth in the point standings after three rounds.

Smolyar began competing in karts in 2015, which he only did for two seasons. After winning the Trofeo Andrea Marguitti event and WSK Night Edition in 2016, he made the transition to single-seaters.

In 2017 Smolyar competed in two versions of Formula 4, the SMP F4 Championship and the F4 Spanish Championship. For both of these he raced with SMP Racing, a team aimed at cultivating Russian talent. In SMP F4 Smolyar finished third, just one point behind Bent Viscaal, and not much further behind the champion Christian Lundgaard.

He also finished third in Spanish F4, again behind Lundgaard and Viscaal respectively. While he didn’t win any races in SMP F4, he took a total of six wins in Spanish F4. After an impressive first season of single-seater racing, Smolyar moved to Formula Renault Eurocup for 2018.

Smolyar joined Formula 3 with ART Grand Prix in 2020 for his rookie season. He ended the season just outside the top ten with one podium and 59 points to his name. In a season that the Prema Racing team dominated, it was ART’s Theo Pourchaire who managed to get between their drivers finishing first, second, and third.

Despite being outperformed by one teammate, Smolyar still finished ahead of his other teammate, Sebastian Fernandez. ART finished third in the teams’ championship, and Smolyar stayed with them for another season.

For 2021 Smolyar had two new teammates in Frederik Vesti and Juan Manuel Correa. He would have an excellent start to the season, winning the first race of both the first and second rounds of the championship. While he would only take two more podiums for the rest of the season, those victories grabbed him sixth in the overall standings, less than 100 points behind the champion Dennis Hauger.

While nine drivers who competed in the full Formula 3 season in 2021 were promoted to Formula 2, Smolyar was not among them. Citing budget problems, he stayed in Formula 3 for another season, this time with MP Motorsport.

But the Russia-Ukraine conflict put a halt to Smolyar’s plans. Complications over Russian drivers competing at all were a problem, but it was SMP Racing’s withdrawal from all FIA competitions that really put a halt to his 2022 plans.

SMP Racing was one of Smolyar’s major financial backers, so when they pulled out of the competition, he announced that he wouldn’t be racing in Formula 3 for 2022.

But MP Motorsport needed a driver, and the FIA allowed Russian drivers to compete under a neutral flag, so Smolyar remained in Formula 3. He again had a good start to the season, finishing on the podium in the very first race in Bahrain. After three rounds, Smolyar is sixth in the point standings, a ways above both of his teammates.

On the confusion surrounding whether or not he would compete, Smolyar said after his first podium: “I know this is difficult times, but [I’m] also trying to focus on my job, and that’s it.”

Between budget problems and an International crisis, it’s a miracle that Smolyar is racing at all. He’ll hope to make the most of it for the rest of the season, and maybe even show the Formula 2 or Formula 1 teams that he’s a driver worth backing.