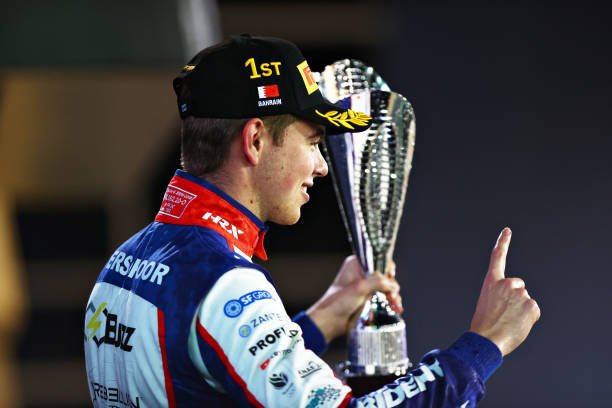 BAHRAIN, BAHRAIN - MARCH 19: Race winner Richard Verschoor of Netherlands and Trident (20) celebrates on the podium during the Round 1:Sakhir Sprint Race of the Formula 2 Championship at Bahrain International Circuit on March 19, 2022 in Bahrain, Bahrain. (Photo by Dan Istitene - Formula 1/Formula Motorsport Limited via Getty Images)

F2: Consistency the key to be a contender

Trident have had a strong start to the season, winning their first ever F2 race. Can they win the title?

In a sport like Formula 2, consistency is the perfect attribute for achieving your goals.

Motorsport is a competitive industry and Formula 2 is no exception. With 11 teams and 22 drivers on the grid, races can get very intense but exciting.

This season, the first two rounds have been and gone. So far we have seen four different race winners and two different pole-sitters.

On-track battles between drivers and teams are something we all love to see. But for those involved, to battle and get the best results they can, many skills are needed.

Consistency and effort are two of the key attributes. They help with: self-discipline, self-control, and building great perseverance.

Formula 2 has a grid of many talented drivers, all looking to develop their skills in the car. They are in the best place in their careers to make the step from F2 to Formula One. That is the ultimate dream but they need to prove themselves.

The drivers go through testing to get a feel for the cars and to see what can be improved. When they are not on track, the drivers spend time in the simulators, trying different setups and learning the tracks.

The consistency to practice and learning will eventually see them be successful in their careers. With one less race this season, the drivers have less time on track.

But teams still expect the drivers to leave everything on the circuit and show what they can do, hopefully gaining some good points and a good finish.

One team in particular that has improved in recent seasons and has been having good races is Trident.

This season we have seen different drivers in an intense battle for the podium and victory. Many teams have rookies joining experienced teammates and Trident is one of them.

Australian Calan Williams is racing with Trident for his rookie season, alongside teammate Richard Verschoor. This pairing looks to be promising as the team have had a good start to the season.

In previous years, Trident has struggled a lot with finishing in top positions; but we have seen everything change in the early rounds of 2022.

It is Verschoor’s second season in Formula 2 this year. So far, we have seen the Dutchman improve by huge steps and get a Sprint Race victory (Bahrain GP) and a P2 podium finish (Jeddah Feature Race).

During the press conference after the weekend, FormulaNerds spoke to Verschoor. When speaking about how he feels being a contender for the title, he said:

“I think at the moment we are doing a good job. In the end, consistency will be key so we need to keep pushing.”

Williams may not have yet had the success that his teammate has. But it is not to say that he won’t. His first two rounds as a rookie have shown his potential and talent, and there will be many more successes to come.

So as the season continues, the drivers and teams will be preparing for testing in Barcelona (April 12th-14th) and the third round in Imola. We have already seen lots of on-track battles and there will undoubtedly be many more to come.

The current standings see Trident and the two drivers in: